Frankel!!!!!   Retired TBs -Past and Present

Thats what I was thinking as I was doing the dishes - heard the mention - and said - Cool - Frankel's little bro - hope he is as good as his big bro!

I think Noble Mission has only just come within the radar. I don't remember any mention of him before - but then I do forget a lot of things! Someone on another site says that Boylesports have already priced him up at 20/1 for next year's 2000 Guineas.... presumably because of his big brother.  I had to check who he has been placed with - and I see he is with Henry Cecil, but I don't know when he is likely to be seen on a racecourse. I'll  keep a look out for any more news on him.
0
ReplyToggle Dropdown
Msg 53 of 599 to hornsix1hornsix1
In reply toRe: msg 46

Big week of racing at Ascot.   Frankel on Tuesday. 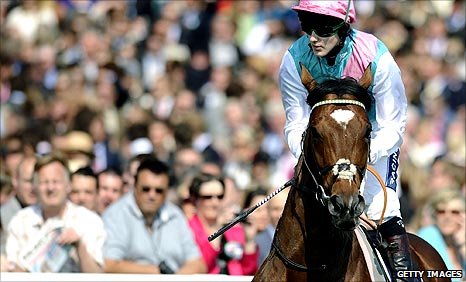 The race is one of three Group One contests starting the meeting, with top milers Goldikova and Canford Cliffs clashing in the opening Queen Anne Stakes.

Second up on the first day is the King's Stand Stakes, featuring some of Europe's leading sprinters including Temple Stakes winner Sole Power.

But it is Frankel who has the racing world abuzz after he stormed to a six-length win in the Guineas, having powered out of the stalls to sew the race up by halfway.

Queally appears to have few worries that race will have left its mark on his mount, who has won all six of his races.

"He's no different than he was before the Guineas," he said.

Talented horses from America, Australia, Hong Kong and Japan will converge on Ascot this week, but the most fascinating prospect is Frankel, who surely has no chance of making as deep an impression as when we last saw him. His runaway success in the 2,000 Guineas was the most amazing performance in an English Classic of my racing lifetime and the Ascot crowd will doubtless hope he can do something similar in the St James's Palace Stakes on Tuesday.

The meeting begins with a sensational clash of talent when Goldikova and Canford Cliffs meet in the Queen Anne. Canford Cliffs is favourite and has a rare turn of foot, but narrow victories over Dick Turpin, Rip Van Winkle and Worthadd do not amount to the same as Goldikova's many achievements.

Thanks for the reminder! I'll see if it will be televised on anything I get......otherwise, live streaming?
0
ReplyToggle Dropdown
Msg 56 of 599 to hornsix1hornsix1
In reply toRe: msg 55

BBC Sport will have live on-line coverage.  I would expect HRTV to cover it as well but am not sure.  Will check later.

Tomorow is going to be a great day of racing at Ascot for any lucky enough to be home to watch!  Goldikova - Canford Cliffs - FRANKEL!

Can't wait to see him run!   Seems to me I heard them say Goldikova's race would be televised (on either HRTV or TVG) around 6 AM Tuesday AM - CA time.   But does anyone know what time Frankel's race will be shown over here?  I'll be at work for that one, & need to set my DVR!

according to the guide only TVG will be showing here live and tbey have a prep show first and then 3 straight hours of racing--think it does start at 6 your time and just keeps going..........Frankel is after Goldikova--Liz has posted a bunch of info on the Overdose thread and if it is different than that will let you know........here's some of her info: