Latest May-6 by Flurry84

As a TAA accredited facility and grant recipient, we are thrilled to see the strong support from 20 farms and 119 TB stallions in support of the TAA and aftercare! - AKINDALE THOROUGHBRED RESCUE  https://www.facebook.com/Akindale/?fref=nf

Twenty Stallion Farms Contributed to the TAA in 2015

The Thoroughbred Aftercare Alliance (TAA) received funding from 20 farms in 2015 through stud fees from 119 Thoroughbred stallions. The stallions’ connections pledged to donate 25 percent or more of the advertised stud fee for each horse.

Spirited bidding from a gathering of about 250 at the Keeneland Entertainment Center Jan. 9 bought $714,000 in stallion seasons to benefit of the Thoroughbred Charities of America. The TCA's 26th Annual Stallion Season Auction fundraiser raised $737,500 for all its live auction items, that included 10 no-guarantee seasons to , Bodemeister , , , , Into Mischief , Malibu Moon , Medaglia d'Oro , Speightstown , and Super Saver .

That is awesome.  I was wondering who the stallions were so thanks for the link.

You are welcome, there were some really nice studs offered here.

This is one of my favorite racing owners. TB Racing lost a good man when Bob Died. 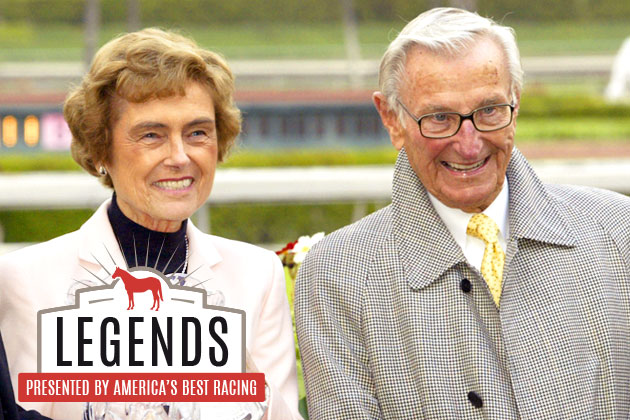 By Bob Ehalt Content Courtesy of America's Best Racing Thoroughbred racing, like any other sport, has been home to the exploits of scamps, scallywags and scoundrels. At the other end of the scale of human character and integrity, few people in the sport have ever been as genuinely beloved and admired as Bob and Beverly Lewis.

Frosted kicked off 2016 season in style with victory Thursday in Al Maktoum Challenge Round 2 at Meydan setting a new track record.

741: Horses entered in the Thoroughbred Makeover.

Big News of the Week

NYRA acknowledged it was adding the races as “a small effort to bring back the importance of stamina in the breed.” An eight-month mission to obtain and return a majestic Thoroughbred gelding to a woman who sold the animal six years ago, but carried a torch for him ever since, ended yesterday with tears of happy surprise as the statuesque horse came walking back into the life of Britt Wadsworth.

Another feel good story! Isn't he a BIG, BEAUTIFUL boy?!
0
ReplyToggle Dropdown
Msg 74 of 484 to gerchgogerchgo
In reply toRe: msg 73

He is and I hope they have many years of happiness again!