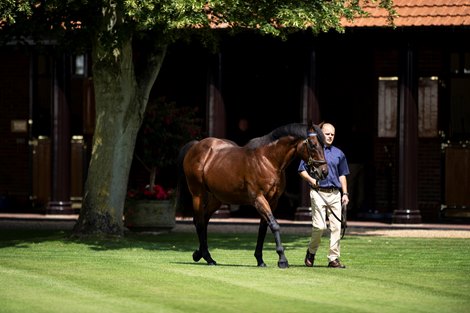 The exciting Philomene provided Dubawi with his 200th stakes winner when breezing to victory in the Prix Penelope (G3) at Saint-Cloud.

Just saw this on Bloodhorse Daily.

Orb sold to Uruguay.  A coalition of top breeders in Uruguay have finalized the sale.  He will stand at Haras Cuatro Piedras, Progreso, Canelones.  I pray for his safety in SA in light of some occurences there in the past two years.  I wonder if Steve Haskin knows anything about this stallion station since he has friends in racing down there.  There were more than 20 purchasers mentioned  (finally quit counting). and article says no one owns more than 10% of Orb.

Wanted to start a thread for Orb here but could not locate a way to do so and was not going to keep hunting.  Prayers for his safety and success in Uruguay.

That's a shocker- is he not a successful stallion?  I thought he was doing well

Amy, Derby and Gerchgo should weigh in on Orb's success as a sire.  He has not produced those big winners, except that Larry Jones' trained Woah Nellie and a couple others have done nicely.  His dam side with Phipps bloodlines and also the links to SA lines would be an incentive for Uruguay to consider him.

Well crap! I pray for him as well!

at the top of the page it says new topic, if you click on that it will bring up the subject line, who you’re posting to, and which thread you want it in, just like you would post here for replies.

Selling him allows the owner to continue on with the next generation.
Unfortunately he has not been that successful