I'm looking at this stunning pic of #Charon and I'm thinking, this moon has seen some sh*t. http://t.co/wb55JnS5MG pic.twitter.com/1G74CrSQBh

Crescent #Pluto & its moons: a view possible only from beyond, looking back. (Processing by @NewHorizonsIMG) pic.twitter.com/SAfHVqWgpv This composite of enhanced color images of Pluto (lower right) and Charon (upper left), was taken by NASA’s New Horizons spacecraft as it passed through the Pluto system on July 14, 2015. This image highlights the striking differences between Pluto and Charon. The color and brightness of both Pluto and Charon have been processed identically to allow direct comparison of their surface properties, and to highlight the similarity between Charon’s polar red terrain and Pluto’s equatorial red terrain. Pluto and Charon are shown with approximately correct relative sizes, but their true separation is not to scale. The image combines blue, red and infrared images taken by the spacecraft’s Ralph/Multispectral Visual Imaging Camera (MVIC).

With Pluto in the rear view mirror, NASA’s New Horizons Mission will continue on to a smaller Kuiper Belt body http://t.co/7vTEVxAGIF 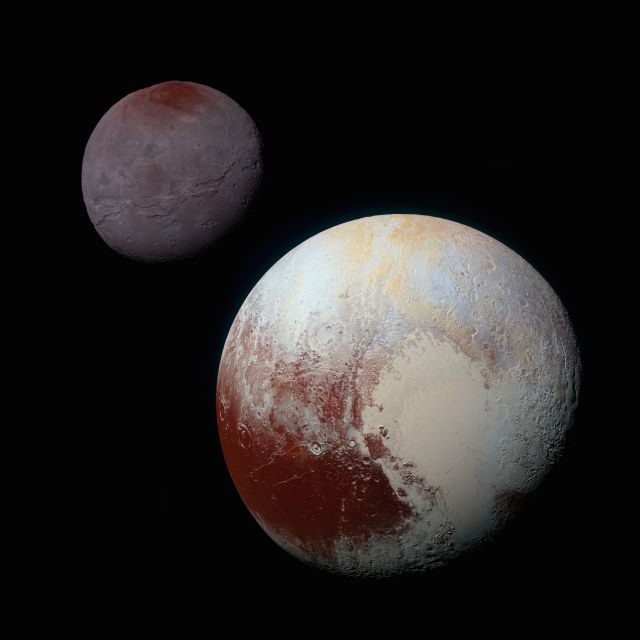 New Horizons has been sending back stunning images of Pluto and its system for a while now. As we've collectively feasted on them, they've given researchers a chance to study the ex-planet and its satellites in unprecedented detail.