Latest Jan-20 by The Wacky One (TOILETHEA1)

Are you awake now?   America - all of it

As Solomon wrote opinion columns in early April 2019 attacking U.S. Ambassador to Ukraine Marie Yovanovitch, according to AT&T phone records produced by the Intelligence Committee, he was in frequent phone contact with Giuliani and his associate Lev Parnas.

Are you awake now?

"Well, you have to ask that to Rudy. But Rudy, I don't, I don't even know. I know he was going to go to Ukraine, and I think, he cancelled a trip," he told O'Reilly. "But, you know, Rudy has other clients other than me. I'm one person –"

He's beginning to distance himself from Rudy...

I think that's what happened inWatergate, they turned on each other

I think that's what happened inWatergate, they turned on each other 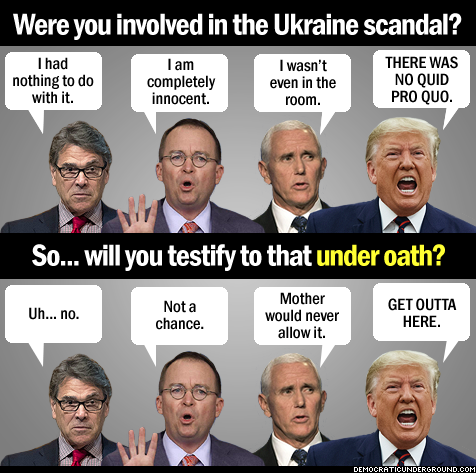 John Bolton is the one who is the most bitter - and immediately recognised the danger of what Trump was doing.

This is Schiff's time-line. Bolton clearly knew it was wrong and was very embarrassed when it started to be discussed.

... Bill Taylor, a former Ambassador to Ukraine ... a request to succeed Ambassador Yovanovitch in Kyiv. As of May 26, Ambassador Taylor was "still struggling with the decision," and, in particular, whether anyone can "hope to succeed with the Giuliani-Biden issue swirling." ... Taylor would quickly come to observe an "irregular channel" led by Mr. Giuliani that ... Mr. Giuliani would prove to be, as the President’s National Security Advisor Ambassador John Bolton would tell a colleague, a "hand grenade that was going to blow everyone up."

Undaunted, Ambassador Sondland ushered many of the attendees to the Ward Room downstairs to continue their discussion.

In the second meeting, Ambassador Sondland explained that he had an agreement with Mr. Mulvaney that the White House visit would come only after Ukraine announced the Burisma/Biden and 2016 Ukraine election interference investigations.

At this second meeting, both Lt. Col. Vindman and Dr. Hill objected  ... Dr. Hill reported back to Ambassador Bolton, who told her to "go and tell [the NSC Legal Advisor] that I am not part of whatever drug deal Sondland and Mulvaney are cooking up on this." Both Dr. Hill and Lt. Col. Vindman separately reported the incident to the NSC Legal Advisor. https://www.scribd.com/document/438094671/20191203-Full-Report-Hpsci-Impeachment-Inquiry-20191203

So John Bolton protested this corruption and was sacked for it.

0
ReplyToggle Dropdown
Msg 5 of 7 to BerryStephBerrySteph
In reply toRe: msg 4

Seems to me that he got others to protest for him.

Seems to me that he got others to protest for him.

Maybe I used the wrong word.

p.19 ... On July 10, Ambassador Bolton hosted a meeting in the White House ... Ambassador Sondland spoke up, revealing that he had worked out an arrangement with Acting Chief of Staff Mick Mulvaney to schedule the White House visit after Ukraine initiated the "investigations." Ambassador Bolton "stiffened" and quickly ended the meeting    https://www.scribd.com/document/438094671/20191203-Full-Report-Hpsci-Impeachment-Inquiry-20191203

And there's another weird Americanism in there which makes things confusing, Bolton was not functioning as an Ambassador atall, only briefly been one years ago:

Bolton was the United States Ambassador to the United Nations from August 2005 to December 2006 as a recess appointee by President George W. Bush.

Leaving for work yesterday morning, I was confronted with my man shaking his fist at the TV whilst a southern Republican said with a sneering voice, "Today we will hear some interesting conversation about the Constitution, and other things".

Seems the Republicans don't much like some of the Constitution.

The Professors at the hearing, trained, ingrained, learned in Constitutional law, who probably know it by heart, were being poked at by Republican Reps, handpicked for brash obnoxiousness, and probably don't even know the number of amendments, much less the first paragraph.

GO Pubs! Show your ignorance! Rah Rah, hate the parts of the constitution that you don't like, the census, and human rights, except for corporations rights, it's all about the money and who it flows to.  That's rights after all.