US President Donald Trump is not the only world leader to land in trouble with medical experts, Madagascan President Andry Rajoelina earning the ire of local medical officials for promoting a herbal drink as a COVID-19 treatment.

Gary Lenius and his wife Wanda — The Sun

The fraudstream media is truly the enemy of the American people.

As reported by Cristina Laila back in March —

There are numerous international studies that show the combination is very effective in treating the coronavirus and also acts as a prophylactic.

We reported on the success of Chloroquine previously.

The propagandists in the media however are desperate to make President Trump look like a murdering liar so they spread one of the biggest hoaxes yet in the Coronavirus news cycle.

In late March it was reported that a 68-year-old man died after ingesting chloroquine.

Only he didn’t ingest chloroquine — he drank fish tank cleaner and poisoned himself to death.

But the media ran with the lie anyway, because orange man bad. You can read more here.

But the story was a bit strange and now the Mesa Police Department are investigating the death of Gary Lenius as a homicide.

The Mesa City Police Department’s homicide division is investigating the death of Gary Lenius, the Arizona man whose wife served him soda mixed with fish tank cleaner in what she claimed was a bid to fend off the coronavirus. A detective handling the case confirmed the investiga

0
ReplyToggle Dropdown
Msg 50 of 203 to ElDotardoElDotardo
In reply toRe: msg 22

How dare U show what it was that the president was asking his Task Force about.  Nothing ILLOGICAL about it at all it turns out.

It's the MSM's interpretation that is the issue.  IT added the words LYSOL & CLOROX in order to make it Shocking to the average person.  OHMIGOD!

Nothing to get Ones panties in a bunch about People.

There was nothing 'sarcastic' about what the president said.  He wasn't being resentful or petulant or vindictive or pugnacious.  He was running past his Task Force an idea he'd heard about from Homeland Security...an idea that actually HAS substance.

The CDC has a 'spotty' record when it comes to expertise.  It is better 2 B skeptical about anything it says and/or does.

That agency has been (B4 TRUMP) one of the barriers - along with the FDA - for allowing private labs to work on scientific projects. Professional jealousy?  The CDC tried on its own to develop tests and failed miserably.  Now that Private & federal agencies R working together things have improved.

*chuckle* Thanks for noticing, and having the courage to point out the obvious. For far too many, hating Trump is their reason for being, and objective reality is the first casualty . . . 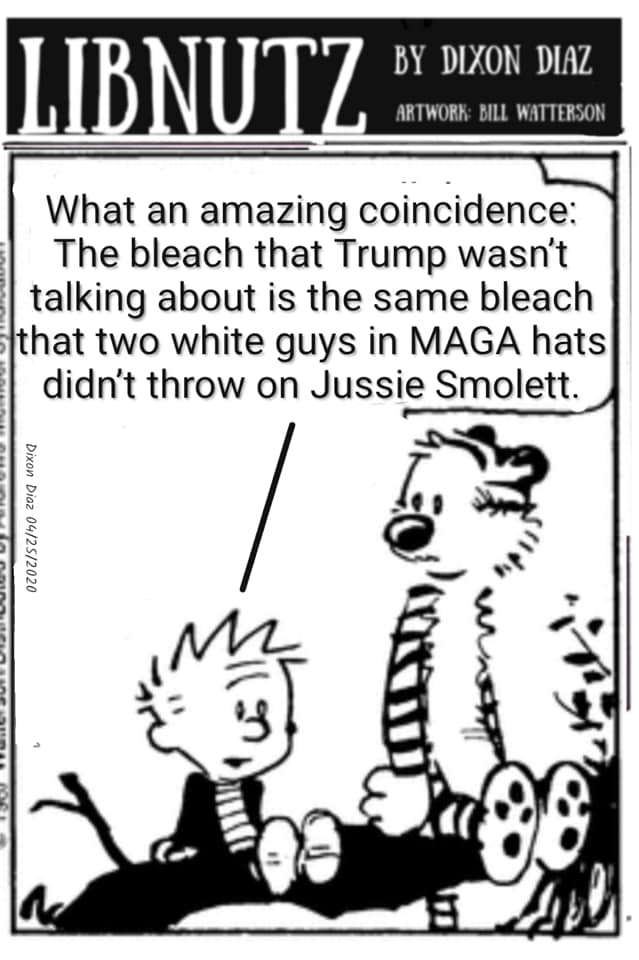 Also, I found this article somewhat of an eyeopener . . . especially as I'm old enough to remember both Vietnam and this flu . . .

An I’m-so-cute-and-clever reporter recently asked the president if he deserved to be re-elected given the number of deaths from coronavirus, noting that the number is greater than American fatalities from the Vietnam war.

People can always find something as a point of comparison as if that automatically adds weight to what they are implying. No doubt this reporter thought stats from the Vietnam war added gravitas to her query.

In any case, her disrespectful and rude question didn’t deserve to be dignified with an answer. But Trump answered her anyway. Unfortunately, he didn’t use the opportunity to his advantage by giving her a little history lesson, as discussed at The Daily Wire:

…She may have been unaware that at the height of the Vietnam war, there was something that killed more Americans than the war did, and it was a similar virus — and no one questioned whether a president should be elected or not because of the virus, known as the Hong Kong Flu.

In 1968-69, the Hong Kong flu ravaged the world; it wound up killing more than one million people worldwide, over 100,000 of them in the United States. No lockdowns were imposed and people still went to work, albeit lessening bus travel and implementing social distancing and more washing of their hands.

The Wall Street Journal explained. “The novel virus triggered a state of emergency in New York City; caused so many deaths in Berlin that corpses were stored in subway tunnels; overwhelmed London’s hospitals; and in some areas of France left half of the workforce bedridden.”

As John Fund notes in National Review, the Hong Kong Flu “was an especially infectious virus that had the ability to mutate and render existing vaccines ineffective … Hundreds of thousands were hospitalized in the U.S. as the disease hit all 50 states by Christmas 1968. Like COVID-19, it was fatal primarily to people older than 65 with preexisting conditions.”

The Encyclopedia Britannica pointed out the highly contagious nature of the disease: “Indeed, within two weeks of its emergence in July in Hong Kong, some 500,000 cases of illness had been reported … The 1968 flu pandemic caused illness of varying degrees of severity in different populations. For example, whereas illness was diffuse and affected only small numbers of people in Japan, it was widespread and deadly in the United States.”

The Hong Kong flu still exists today. The Centers for Disease Control note, “It was first noted in the United States in September 1968 … The H3N2 virus continues to circulate worldwide as a seasonal influenza A virus.”

Fund notes that a retired professor of medicine, Philip Snashall, noted in the British Medical Journal that his two-year-old daughter was the first known case of the Hong Kong flu in Europe. He wrote, “How things change. The stock market did not plummet, we were not besieged by the press, men in breathing apparatus did not invade my daughter’s play group.”

But now hysteria rules the day and the left is gunning for collapse on all fronts.

Who can forget when Bill Maher wished the economy would crash and trigger a recession so Trump would lose in 2020?

So here we are with the economy in freefall as a highly contagious new virus is circulating that’s killing quite a lot of people.

I suppose we should just let nature take its course . . .