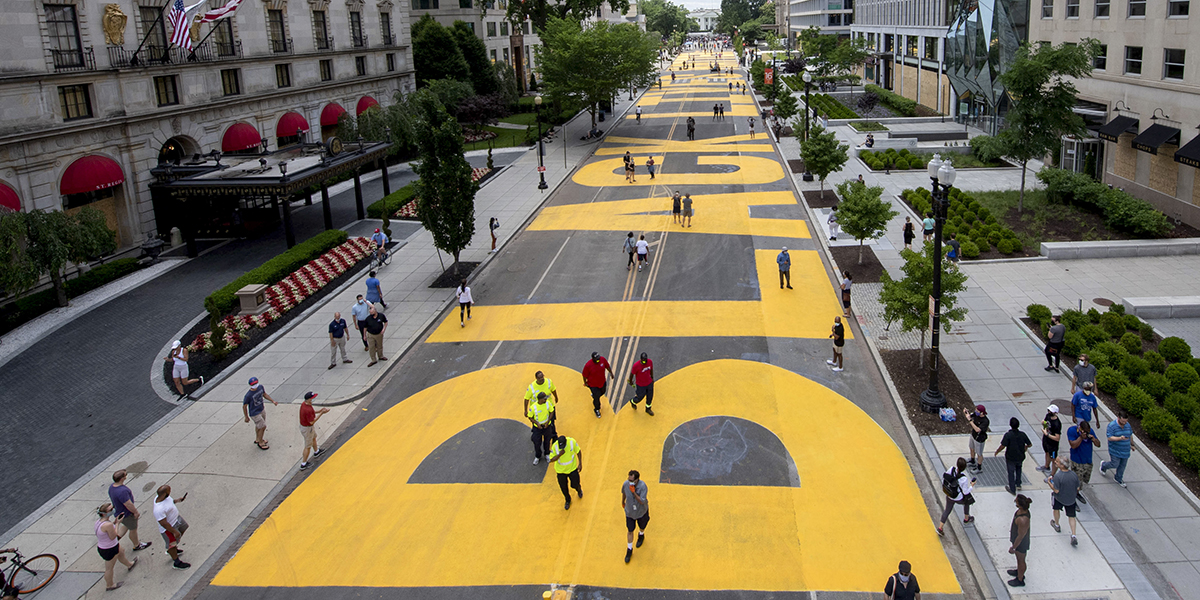 Users of Google Maps will be able to find the newly named "Black Lives Matter Plaza" after it was added to the popular web mapping service.

The clearing of Lafayette Park was ordered to be done by Barr early in the morning.  Why it wasn't done is anyone's guess.  NO ONE ordered an immediate clearing of the area so Trump could take a walk across the street.  The "photo op" was intended to show solidarity with the peaceful protests, but you don't see this in the media, do you?  No, it's "Trump taking a photo op".  So, why bother even reading.  Your mind is already made up.

Don't know why I bothered to post.  It wouldn't matter what political side one is on.  Everyone only believes what is politically correct for them.

There will always be two sides to this while division thrives in the US.

His supporters will see him holding a bible in front of a damaged church as a sign of solidarity.

But he could have waited until the curfew was in place.

Or inspected it the next morning.

He could have asked the St John's reverend what he thought, and if he would like to meet with him.

In the end, tear gas (or smoke bombs), rubber bullets and heavily armed troops were deployed to clear a path by force so a man could stand in front of a church holding up a bible.  Is this a Christian thing to do?

This is not my opinion of what happened.  This all went out live on TV.

Just listen to her.  Please.

Rev. Gini Gerbasi, the rector at St. John's Episcopal Church of Georgetown, said she was at the scene when police fired smoke canisters and pepper balls to d...

BTW, once the police are defunded, who do you intend to call when trouble finds you?

I would really like to hear some well thought out answers to these questions, not just political commentary.

Half the people could not abide Obama now half can’t abide Trump , each group sought photo ops cartoons racist views to portray the leader as this that or the other

These unfolding riots go way beyond the killing of Floyd , until law and order is restored all we are getting are political useless sound bites

Do you really believe the nation as a whole is OK with the rioting and looting that these large crowds degenerated into?

No.  Do you believe everyone who is protesting is looting?

Where are the protests when a white person suffers the same fate, or do you believe that never happens?

Another troubling incident of police brutality is going viral after an elderly white male protester was apparently shoved to the ground by police in Buffalo,...

Finally, do you really believe the answer to racial injustice is to get rid of the police entirely?

Of course not. I believe they need better training.

I believe black neighbourhoods are disadvantaged, and the helping them up is better than beating them down.

I would bet the majority of populations worldwide, what we are witnessing right now only reinforces prejudice, it does not help get rid of it.

Actually as someone who lives in the wide world, this looks like the catalyst for the inevitable full scale civil war your country is headed towards.

Please don't resort to "What about Obama..."

This is not about him.

This is about what is happening right now.

New York City officials downplay or deny the police department's rough treatment of protesters as protests across the country continue for the 11th day.