Latest 4:16 AM by Jenifer (Zarknorph)

Kristen Clarke, racist   America - all of it 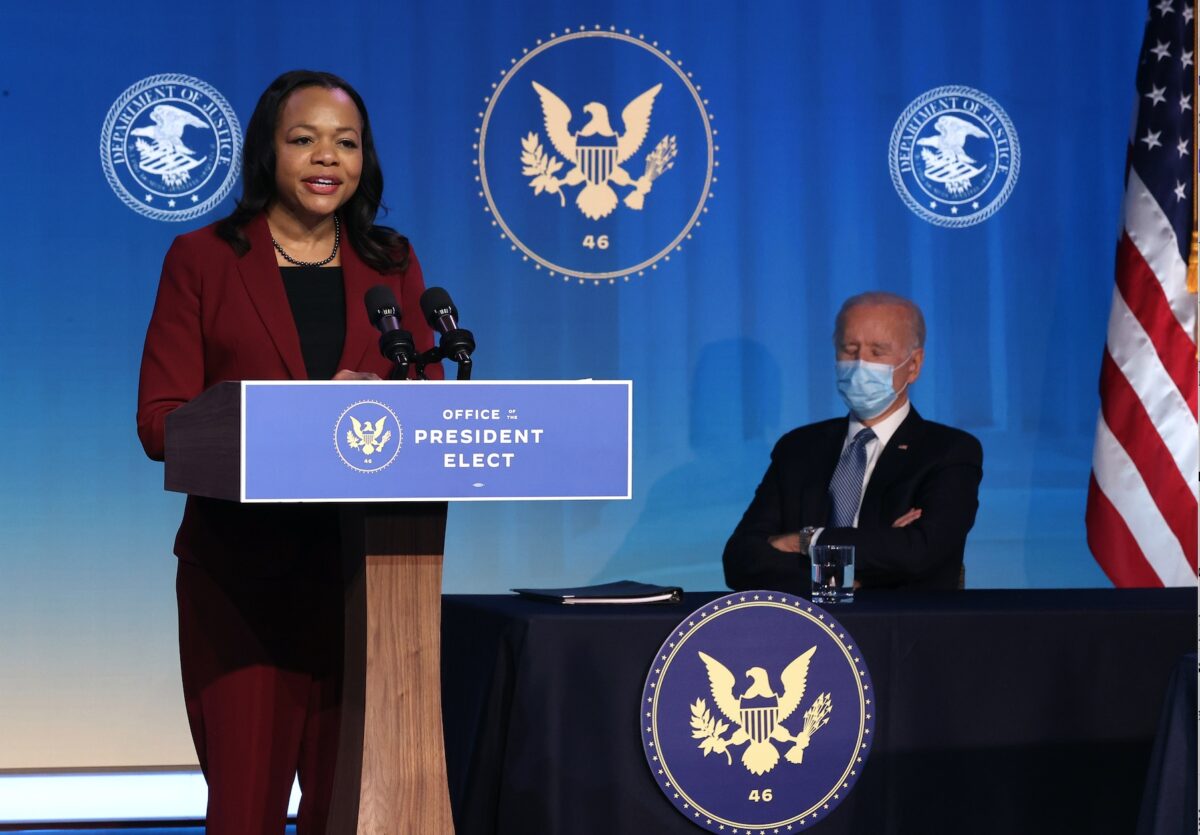 Wikipedia editors on Tuesday locked the page for President-elect Joe Biden’s pick to lead the Justice Department’s Civil Rights Division after users attempted to add reference to a 1994 letter she authored suggesting Black people had “superior physical and mental abilities.”

The letter, authored by Kristen Clarke — then an undergraduate student Harvard — was highlighted on Monday by Fox News host Tucker Carlson.

“Please use the following theories and observations to assist you in your search for truth regarding the genetic differences between Blacks and whites,” Clarke wrote in the letter. Clarke said the differences included that “Black infants sit, crawl and walk sooner than whites,” and that melanin gave “Blacks their superior physical and mental abilities.

“Some scientists have revealed that most whites are unable to produce melanin because their pineal glands are often calcified or non-functioning,” she added. “Pineal calcification rates with Africans are five to 15 percent, Asians 15 to 25 percent and Europeans 60 to 80 percent. This is the chemical basis for the cultural differences between Blacks and whites.”

She reiterated her point in closing — and added a spiritual component, writing, “Melanin endows Blacks with greater mental, physical and spiritual abilities — something which cannot be measured based on Eurocentric standards.”

Wikipedia editors locked Clarke’s page on Tuesday, just a day after Carlson aired a segment talking about Clarke’s letter, after users made several failed attempts to insert references to it on the page.

So do primates. Next!

This sounds like simple evolution.  Africans are the oldest humans, so they have a genetic head start.

Ha!  I knew you were a racist.

Do you believe this stuff?   What if I told you that blacks score 1 standard deviation lower than whites on every IQ test ever given?   And unlike Kristen Clarke, I didn't make this up.

IQ tests have been debunked as inadequate and misleading indicators of intelligence.

Whether African infants sit, crawl and stand at consistently earlier stages of development than Caucasian or Asian children can be attributed to many things such as diet, environment or genetics.

The difference is, a simple scientific method is used to collect the data - observe and document.

IQ tests have not been debunked.  They are simply politically incorrect.  In other words, they tell us something that our political overlords do not want us to hear.

On another thread you talked about psychology.  IQ tests or their equivalents are used by psychologists as one of their tools in assessing their clients.

Schools use them too.   SAT tests are a form of IQ tests.  They might not directly measure intelligence but they definitely give clues as to how intelligent the takers of these tests are.  That's why they are used as part of the way in which to judge admissions to colleges.

It's remarkable to me that you fall for claims like Kristen Clarke makes, based on what I don't know.  Intelligence tests have been used and refined for a hundred years.  The literature on their explication is vast and so is the data.  And the data shows over and over again that blacks score on average far lower than all other ethnic groups.

Then there is the old bugaboo heredity.  We know that this accounts for a very big part of what makes us what we are, and though measuring it is fraught, studies of twins raised in different circumstances prove that it is significant.  Africans are the only peoples on Earth not to have any Neanderthal DNA in their make-up.  Neanderthals had bigger brains than modern humans.  That is also likely significant.

Neanderthals had bigger brains than modern humans.  That is also likely significant.

I think I'm going to put the forum Neanderthal back on ignore where he belongs.

IQ tests have not been debunked.

IQ tests are 'fundamentally flawed' and using them alone to measure intelligence is a 'fallacy', study finds

SAT tests are a form of IQ tests. They might not directly measure intelligence but....

But what?  You JUST agreed with the basic principal, that IQ tests are unreliable as measurers of intelligence.  Why bother continuing with a "but..."?

Africans are the only peoples on Earth not to have any Neanderthal DNA in their make-up.

0
ReplyToggle Dropdown
Msg 10 of 29 to CamGearyCamGeary
In reply toRe: msg 9

How does melanin influence faith?