Dexter the emotional support peacock has been barred from boarding a flight by United Airlines, to the dismay of its owner and the amusement of passers-by in New Jersey.

New York City-based photographer and performance artist Ventiko said she bought a ticket for her peacock so it would have its own seat on the flight from New Jersey to Los Angeles.

A video shared by Sherri Ross on Twitter shows the animal casually perched on its owner's shoulder as she walks into the Newark Liberty International Airport.

Other photographs shared by The Jet Set TV show Dexter perched on a baggage trolley.

Andrea Hiller, a spokeswoman for Chicago-based United, said they stopped the animal from boarding because it did not meet the airline's size and weight standards, among other reasons.

She said these issues had been explained to the owner three times before they arrived at the airport.

The peacock has its own Instagram account, @dexterthepeacock, where a photograph of it appeared with an accompanying caption saying, "Spent 6 hours trying to get on my flight to LA (Los Angeles) (after following all required protocol). Tomorrow my human friends are going to drive me cross country!"

Emotional support animals typically include dogs and cats and are used by people with some sort of disability, which generally needs to be verifiable. 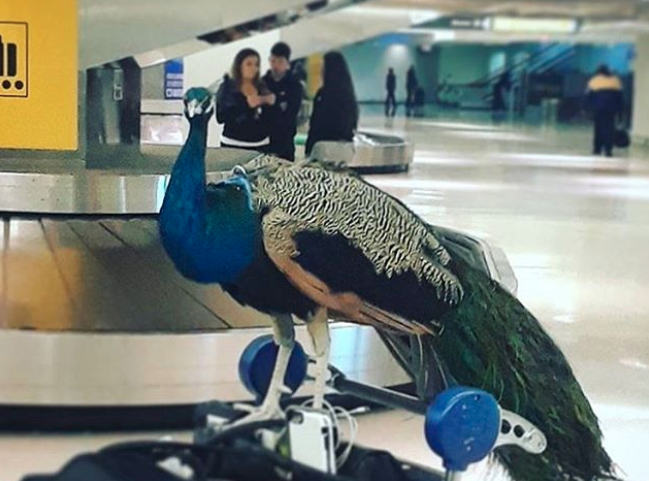 The Indonesian police chief who led humiliating raids against transgender beauty workers says he has re-educated them by making them dress in male clothing and "yell like men".

Just days after he ordered a group of 12 trans women to be stripped of their clothes and have their heads shaved in front of a laughing mob, North Aceh police chief Untung Sangaji ordered them back to his office to practice "macho shouting".

Deputy Police Commissioner Sangaji sent the ABC video of a "re-education" meeting showing he and the trans women shouting "good morning" together.

"We changed their clothes. They were wearing dresses," he said.

"I bought them shirts and asked them to yell. At first it sounded feminine, but then it sounds better.

"Then our preacher gave them a sermon."

Ah, the stupidity of bigotry on full display.

A 37-year old Russian woman has been charged with allegedly glassing a 21-year-old man with an empty wine bottle during an argument on board P&O cruise ship Pacific Explorer.

NSW Police say a fight broke out between several men on board the ship after an argument about a toilet line queue, early on Sunday morning.

During the fight, the 37-year-old woman, who is the partner of one of the men, allegedly hit the 21-year-old man on the head with the empty wine bottle, causing a laceration.

Police said ship security separated the men and they were detained.

The man with the injury was treated by medical personnel on board.

P&O Cruises said it asked the NSW Police Marine Area Command to come to the ship yesterday morning as a "result of their behaviour on board overnight".

"This is in line with our strict policy of zero tolerance of excessive behaviour that affects the safety, comfort and enjoyment of other guests. While these occurrences are rare, we have no hesitation in taking strong action when necessary to adhere to this policy," a P&O spokesman said in a written statement.

Police said yesterday afternoon, six men, including the injured man, and the woman, were removed from the ship at Bradley's Head after the ship was forced to return to port after the incident.

The men were subsequently released without charge pending further inquiries, while the 37-year-old Russian woman was taken to Newtown Police Station.

The woman was granted conditional bail and will appear in court next month.

I guess they all really had to go!

A British student has used an ordinary camera and tripod to capture a prizewinning photograph of a single atom.

The long exposure photograph was taken by University of Oxford student David Nadlinger through a window of a ultra-high vacuum chamber.

Apart from using a lens accessory that increases the focal length of an existing lens, much of the camera technology Mr Nadlinger used was simplistic.

But the scientific process behind capturing the atom in the photo was much more complex.

The single positively-charged strontium atom, held near motionless by electric fields, was illuminated by a laser of a blue-violet colour which caused the atom to absorb and re-emit light quickly enough for an ordinary camera to capture it in a long exposure photograph.

Mr Nadlinger was able to zoom in close enough to capture the atom, which was held between two needle tips about 2 millimetres apart.

The resulting image named Single Atom in an Ion Trap came first in the Equipment and Facilities category of the Engineering and Physical Sciences Research Council's national science photography competition.

"The idea of being able to see a single atom with the naked eye had struck me as a wonderfully direct and visceral bridge between the miniscule quantum world and our macroscopic reality," Mr Nadlinger said.

"A back-of-the-envelope calculation showed the numbers to be on my side, and when I set off to the lab with camera and tripods one quiet Sunday afternoon, I was rewarded with this particular picture of a small, pale blue dot."

You might have the right camera rig, but it might not be so simple to snap your own atom selfie just yet.

Two would-be burglars got into a spot of bother when one threw a brick in an attempt to break a window but managed to hit his partner instead.

The encounter was captured on CCTV footage outside a non-descript warehouse in Shanghai.

The two men are seen approaching the building before one man takes his first attempt at smashing the storefront open with a brick.

The brick appears to bounce off the building and onto the ground, sending one of the thieves scurrying over to fetch it.

Following his lead, within seconds, the other man hurls a brick in the same direction which hits his accomplice in the head.

The brick-throwing burglar can be seen hoisting his partner's limp body off the ground and dragging him away from the scene afterwards.

The video footage was posted to social media website Weibo by the Shanghai Police Department, and has since been viewed more than 15 million times on the site alone.

"If all thieves were like this, police wouldn't have to work overtime," the video was captioned.

The condition of the injured thief is unknown and police are yet to identify the men involved.

A group of North Korean cheerleaders were briefly wowed by the apparent, sudden arrival of their leader, Kim Jong-un, at a Winter Olympics ice hockey game on Wednesday.

Some cheerleaders immediately averted their gaze as the impersonator, who later only identified himself as Howard, smiled and waved to crowds who came to watch a unified Korean team play Japan at the Pyeongchang Games.

"They are playing a good game, they scored one goal. As a president, it's all I can ask for," Howard said, shortly after plain-clothed officials from South Korea's National Counterterrorism Centre moved him away from the cheerleaders, who he said had been doing a very good job.

"I mean I trained them by myself so, of course, they're the best in the world," he said.

Howard had caused a commotion during last Friday's opening ceremony when he and a person dressed as US President Donald Trump were swiftly shown out of the stadium by security staff.

He said he was briefly detained inside a police office during Wednesday's match, then "politely asked" to leave.

"My face is too political," the dejected impersonator said as he walked slowly out of the ice hockey stadium.

"I was born with this face, I've got to live with it."

In North Korea, anyone impersonating a member of the ruling Kim family would be considered blasphemous.

Images of the North Korean leadership are tightly choreographed and controlled by the reclusive nation's state propagandists.

Still, Howard's entrance was so spectacular that the North Korean cheerleaders struggled to stifle a quick laugh in between chants of "We are one!" and "Unify the motherland!".

"It shows you we're human after all," Howard said.

"Doesn't matter if they're South or North Koreans, a sense of humour and a bit of political satire is always needed."

I didn't know The Onion had bought ABC.

It's Intermarche who's nuts.

China cracks down on funeral strippers hired to entertain mourners

Chinese authorities are cracking down on the practice of hiring strippers as funeral entertainment, a technique some rural families use to increase the turnout at a loved one's final farewell.

The country's Ministry of Culture said late last month it would be targeting "striptease" and other "obscene, pornographic and vulgar performances" at funerals and other gatherings across Henan, Anhui, Jiangsu and Hebei provinces.

It has urged witnesses to call a special hotline to report any performances, with rewards on offer for informants, according to the state-run Global Times newspaper.

"The crowd is pushed to climax, roaring with laughter, whistling, applauding and cursing," state media said.

"As the performers saunter into the audience to jiggle their breasts and rub men's crotches, a reminder of 'no photographs allowed' can occasionally be heard."

Hiring entertainment for funerals is a longstanding practice in rural China, as ensuring a high number of mourners attend the ceremony is a way of showing respect to the dead, the Global Times reported.

"Chinese rural households are more inclined to show off their disposable incomes by paying out several times their annual income for actors, singers, comedians, and — most recently, strippers — to comfort the bereaved and entertain the mourners," state media said.

This is also not the first time China has tried to stamp out the practice.

In 2015 two villages in the provinces of Hebei and Jiangsu made headlines with viral photos of strippers at funerals inviting "grieving" men to come on stage and undress them — seniors and children are seen standing nearby watching attentively.

The Ministry of Culture also released a similar statement to this report in 2015 describing the hiring of strippers at funerals as "uncivilised", Xinhua news agency reported at the time.