Too many of them truly do want to see our Republic destroyed, and our form of government replaced by a Communist slave State

That's a pretty broad accusation.  What exactly constitutes a Communist Slave State?  What would that look like in your day to day life?

admit they yearn for Socialism to destroy capitalism completely

There are merits to socialism - healthcare, social security, welfare... and serious problems with capitalism - wage disparity, inequality, environmental damage, volatile markets and 1% of the population owning 99% of the wealth.

I'm not saying capitalism should be abolished, or that socialism on its own is the answer.  But if the merits of both are kept and the failures of both eradicated, then you may find a prosperous society that takes care of the most vulnerable is possible.

and to see our Constitution torn up and replaced by Marxist thought.

I don't know about Marxist thought - but the US constitution is not perfect.

Think about the statues being torn down all around the US right now.  A standard argument against it, is that we should not judge these men by today's standards.  In keeping with that line of thought, you need to look at the constitution as outdated as well.

It needs to be brought out of the 18th century.

I would rather know an ugly truth than a beautiful lie.

All countries have to deal with the atrocities of the past.  America is no different.

The lessons suck.  But without them, you just remain ignorant.  And that is worse.

Fortunately, there are a lot of us, and if necessary, we'll do what we have to in order to preserve our Constitution and our Nation. Whatever that may require.

If you are going to take up arms against your neighbour, you had better make sure that EVERY SINGLE THING written in the constitution is worth killing for.

The Filibuster, The inability of the states to restructure their own governments, Slave labour in prisons, Anonymous voting in congress, The Article 5 Loophole that, theoretically, can create a dictatorship.

Oh, and it's pretty much impossible to amend any of it.

They merely have a pro-America and pro-Trump bias.

You assume that the people who want Trump gone from the White House do so because they are anti-America.  On the contrary.  They want to save their country.  Not from Republicans, but from the one man who is doing the damage.

He's a rather successful businessman who cut his teeth in the truly brutal New York construction business, learned from his mistakes, and kept getting better at that game.

Successful businessmen don't go bankrupt six times.  And I disagree that Trump has ever learnt anything from his mistakes.  He cannot do that, while he refuses to admit to ever making any.

As for the media in general - the environment has become so toxic, that no one knows what an actual real news story looks like anymore.

If the first instinct of anyone is to scream "FAKE NEWS!", then how will they have the faintest idea of what is actually going on in the world?

We're too far apaart on what we were taught, and what we believe, to continue this particular discussion to the benefit of either of us.  And it appears that you've absorbed far too much of the "soft Socialism" lie to see the inevitable enslavement of everybody unfortunate to live in a society that adopts Socialism, for it inevitably - if sometimes slowly - degenerates into a slave State such as the old Soviet Union, or China, or Venezuela, or Cuba.  And yes, I've been to China, and fought Communism in Vietnam.  Some truly wonderful people in both places.  I've also been in Afghanistan - - terrible government there, largely tribalistic and in places oppressed by radical, "fundamentalist" Islam, which is a truly horrible situation for anyone trapped under such rule - - well, except for the mullahs, but that's the whole idea.  Islam isn't really a religion, it's a political system that masquerades as a religion whenever convenient.

Oh well - - on other topics than politics and religion, I hope we can continue friendly conversations!

It is a tad disturbing that you equate a fair minimum wage with the tyranny of Islamic State.

You are right - I can't work with that level of paranoia.

If anything, I'll probably make it worse.

The thing is, I never equated a fair minimum wage (which changes with location and overall economic development) with the tyranny of Islam.  That's something that came entirely from your own way of reading what I've actually said.

And what I've actually said reflects exactly zero paranoia - - though you have regularly asserted that my posts do (in your opinion) exhibit that mental state.  They don't, but you'll never see that.

Well, you addressed none of my points and went on a rant about communists and radical Islam instead.

What was I supposed to make of it?

The idea that Democrats have an agenda to destroy their own country is paranoid.

The constitution is not perfect.

There is no second layer to Trump.  His tweets and actions are not subterfuge and misdirection.  He really is just that stupid.

I am still to find out what this slave state you fear would look like.

If you really fear slavery - you'd do something to abolish it in your own country.

Sharia law is definitely something to fear, but it is not coming to your town.

You are prepared to take up arms against your neighbours, before finding a peaceful compromise.

What is that, other than paranoia?

Actually, I understand why you're so afraid with idiots like this in the media... 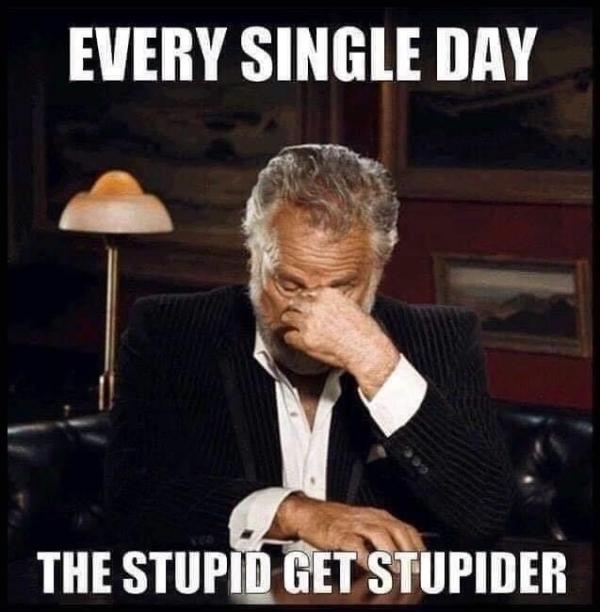 0
ReplyToggle Dropdown
Msg 223 of 315 to ElDotardoElDotardo
In reply toRe: msg 222

BREAKING! Thousands of peaceful protest marches all over the US!

You're not one of those ignorant fools who actually believe Columbus discovered America, are you?

Protecting that mass murdering liar is a waste of police resources. Violent Portland Rioters Chant ‘Every City, Every Town, Burn the Precincts to the Ground’ During Black Lives Matter ‘Protest’ If evil people tell you they want to do evil things, and you have been watching them do these evil things to the best of their ability, maybe it is not such a good idea to put them in charge of the federal government. Lilith Sinclair, a self-described “afro-indigenous nonbinary local organizer” in occupied Portland lays out the Left’s agenda in a straightforward fashion by calling for “the abolition of not just the militarized police state but also the United States as we know it”: This is consistent with everything coming out of the liberal establishment, including the “mainstream” media, academia, Hollywood, and the Democrat Party.

Destroying statues of George Washington and Thomas Jefferson with the tacit consent of local Democrat officials is not revenge for a dead career criminal in Minneapolis. These are acts of war.

It is a war of total annihilation. If we let these creatures win, our country will no longer exist. They will systematically erase it. This has already begun.