Pie says NO DEAL is better than MAY'S DEAL. For tickets to see Jonathan Pie: THE FAKE NEWS TOUR 2019 go to jonathanpie.com

In MHO , if she had let Parliament vote against last Wednesday, she would have had a better arguement in Brussels.

For tickets to see Jonathan Pie's new live show for 2019 go to jonathanpie.com 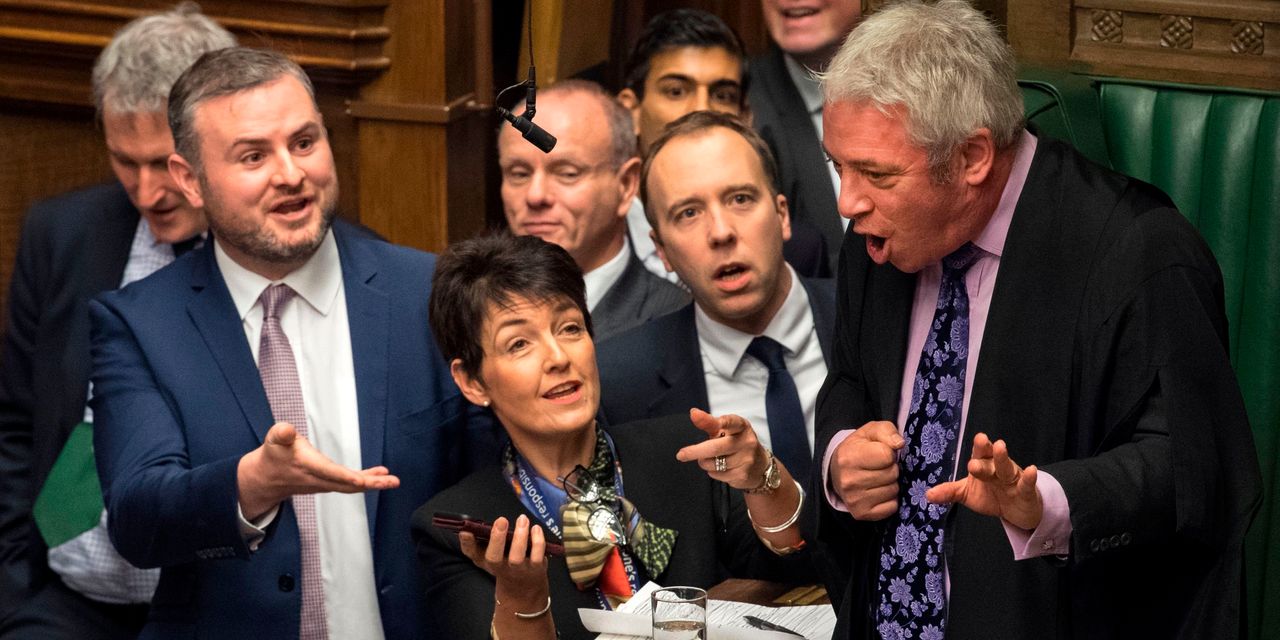 Rule Book from 1844 Becomes a Must-Read in Brexit Debate

As Parliament struggles to agree on what type of Brexit the U.K. should pursue, copies of a 1,000-plus page tome are being dusted off; 'a surprising and delightful revivification' of interest

The factors surrounding Brexit are to do with far more than the "rules" and their implications for policy and governance. They go to the heart of at least six challenges to Britain's once clear but now confused national identity and purpose.

The European question raises fundamental questions about Britain's place in the world. The operation of the global economy in the 19th and early 20th century was largely established by a series of British foreign policy and economic decisions. After it emerged as the cradle of the Industrial Revolution, British influence over global affairs was immense. From around 1750, British inventions created a wave of technological innovation. Railways and steam ships massively increased the speed and volume of domestic and international trade. British alliances and a willingness to intervene shaped much of Europe through wars from Napoleon to the German invasions of Belgium and France in 1914 and 1940. And as Australia's own history demonstrates, British actions — good and bad — were consequential for millions of people a long way from the British Isles.

Often dressed in tweed and double-breasted suits, many of the fiercest advocates for Britain leaving Europe have a nostalgia for this period. Conveniently, those wanting to "put the 'great' back into Great Britain" forget the role that the Atlantic slave trade, and the many abuses of colonial rule, played.

The Anglo-Irish question is now core to the European question. With a 500-kilometre land border between Northern Ireland (in Britain) and Ireland (still part of the European Union); the deep unease with the words in the agreement threatening the open movement of people and goods; a government reliant on the support of the Ulster Unionists to retain a majority in Parliament, and; little clarity regarding future arrangements and the so-called "back-stop" designed to avoid future dispute, many see Brexit as a recipe for increased tension and a weakening of the 1998 Good Friday agreement. An agreement which brought an end to 30 years of sectarian violence.

The European question has become a threat to the very union of the United Kingdom. Scotland clearly voted to remain. The Scottish government and Parliament have since been excluded from negotiations with the European Union. Nicola Sturgeon, the leader of the Scottish National Party government, clearly sees the confusion in Westminster as a platform on which to base a further push for Scottish independence.

4. Inequality
The deep social and economic divisions in the country have been further revealed. While the wealthy south-east and London are enjoying many of the benefits of globalisation and a single European market, this is less clear for those living in the north, where the globalised economy and immigration are viewed by many as a threat. Coronation Street has never been Kensington, but the differences in lived experience for people in different regions has become ever more stark. That London and its surrounds now has a higher productivity than Germany is remarkable, and yet there is a 44 per cent gap between the south-east and the rest of the country.

Parliament has been placed under immense stress. Can the so-called "mother of Parliaments" prove up to the task and be a forum for open, deliberative debate on questions of the national interest? Might it come to the rescue to propose and agree on a manner in which a "no deal" Brexit is avoided? Or will it vote down the Government's unpopular deal with no alternative process or plan? Over the coming weeks it is clear that Parliament — and British Parliamentary democracy — will either be emboldened or greatly diminished by the process.

So what does that mean in terms of May's tenure?  Does this mean UK is not leaving the EU?