Are you aware of Iran's military capabilities, their airforce (the real one not the pretend one the Mullahs sit in) is 1960's Phantoms , their Navy is 3rd hand 1950's and their armour is strictly 1970's

Where is the capability, you think the Americans or the Israelis will allow Iran to enter Iraq? 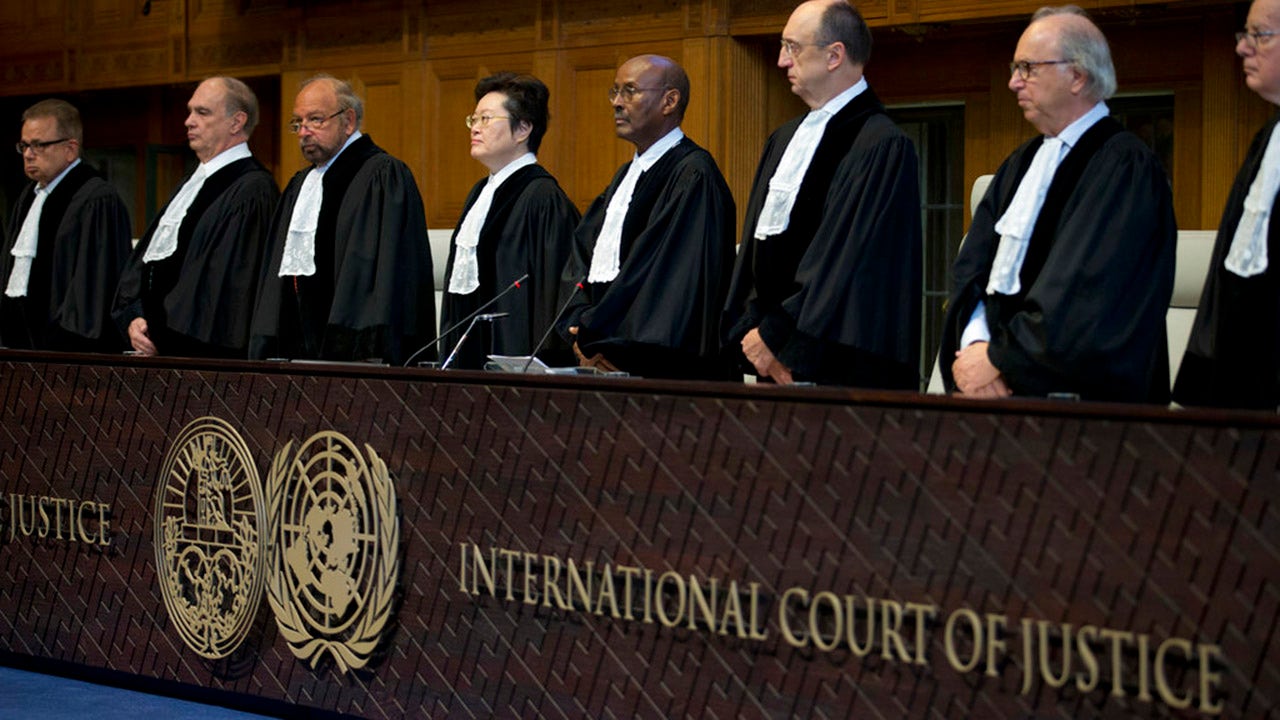 Pompeo pulls out of treaty with Iran, in response to UN court ruling

Secretary of State Mike Pompeo announced Wednesday that the U.S. is terminating a 1955 treaty with Iran, after the United Nations' top court used that treaty to order the U.S. to ease some of its sanctions on the regime.

Pissing off HBO is not a god thing...

The Trump administration has announced it has restored sanctions on Iran's vital oil industry as the Middle-Eastern country grapples with an economic crisis that has sparked sporadic protests over rising prices, corruption and unemployment.

The oil sanctions will come into effect on Monday and will target Iran's largest source of revenue in the most punishing action taken since the Trump administration withdrew from the 2015 nuclear agreement in May.

It is the second lot of sanctions imposed since May, after the US targeted Iran's automotive sector, financial transactions involving US dollars and the purchase of commercial airplanes and metals, including gold.

The White House insists the sanctions are not aimed at toppling the Islamic Republic, but at forcing Iran to dramatically alter its policies in the region, including its support for militant groups across the Middle East and its development of ballistic missiles.

The UN nuclear agency says Iran is complying with the nuclear deal.

Iran economy suffering due to sanctions

The renewed sanctions have already taken a heavy toll, with Iran's currency, the rial, losing half its value since April and the prices of fruit, poultry, eggs and milk skyrocketing.

Protests erupted across the country in December, with some demonstrators chanting against the Government and clashing with police.

Sporadic demonstrations have been held in recent months, including strikes by workers, teachers and truck drivers.

"All the prices are going higher every day … I cannot imagine what will happen after [new sanctions are imposed]," elementary school teacher and father of three, Pejman Sarafnejad, 43, said.

"I am scared. I am worried. I am desperate.

"I cannot even buy rice to feed my children or pay my rent."

Iran's Foreign Ministry spokesman Bahram Qasemi told state TV on Friday that the Government was not concerned with the new sanctions.

"America will not be able to carry out any measure against our great and brave nation … We have the knowledge and the capability to manage the country's economic affairs," he said.

"The new US sanctions will mostly have psychological effects."

The nuclear accord struck under the Obama administration, which was also signed by Britain, France, Germany, China and Russia, lifted crippling international sanctions in exchange for Iran curbing its nuclear program.

Western countries had long suspected Iran's nuclear program masked the covert pursuit of atomic weapons, but Iran has denied these allegations and always insisted its nuclear activities were for energy and other peaceful purposes.

After the agreement took effect in 2016, Iran began exporting its oil more freely and signed billion-dollar agreements with Airbus, Boeing and other Western firms.

But the legacy of decades of sanctions and economic mismanagement remained, and the nuclear deal's future was thrown into uncertainty with the election of President Donald Trump, who had repeatedly vowed to exit the deal and finally withdrew in May.

Starting on Monday, the Trump administration has promised that companies which fail to comply with the sanctions will be barred from doing business in the US.

Eight jurisdictions have been granted a temporary waiver to import Iranian oil, Washington confirmed, although US Secretary of State Mike Pompeo did not name the eight.

However, he said the European Union as a whole, which has 28 members, would not receive a waiver.

Turkish Energy Minister Fatih Donmez said Turkey had been told it would be granted a waiver.

India, Iraq and South Korea were also on the list, a source familiar with the matter who spoke on condition of anonymity said.

In recent weeks, Iran's President Hassan Rouhani had tried to reassure the public, saying the worst has already come to pass and the Government was working on ways to evade the new sanctions.

But in a televised Cabinet meeting on Wednesday, he acknowledged that "the situation was hard for people in recent months, and it may be hard in the next several months, too".

"The government will utilise its entire capabilities to alleviate the problems," he added.

Iran nuclear deal at a glance

The main points in the 2015 deal aimed at curbing Tehran's nuclear program in exchange for sanctions relief.

In an effort to circumvent the sanctions, Iran began selling some of its oil in an energy stock exchange on Sunday.

Iran's Oil Minister Bijan Zanganeh said 280,000 barrels were sold on the IRENEX exchange as of Wednesday and that 720,000 barrels will be provided later.

European countries, which remain committed to the nuclear deal, have discussed taking measures that would shield European companies from the US sanctions and allow them to keep doing business in Iran.

But thus far they have been unable to prevent an exodus of major firms, including Boeing and Airbus, which suspended the aircraft purchases.

Despite the unravelling of the nuclear deal, Iran is still complying with it and appears to be waiting out Mr Trump, hoping his successor re-joins the agreement.

In the meantime, the renewed sanctions risk further undermining Mr Rouhani, a relative moderate, and strengthening hard-liners distrustful of the West, the International Crisis Group said in a report this week.

"The alternative to both sides taking a step back from the escalatory path is a sanctions regime that penalises Iran and the Iranian people, but does not enhance peace and security in the region and could well lead to war."

Reactions to the Game Of Thrones Meme

When US President Donald Trump took the unusual step of using a Game-of-Thrones-inspired meme to announce the restoration of oil sanctions for Iran, HBO — which produces the TV series — was not amused.

The former reality show star tweeted a picture of himself with the words, "Sanctions are coming — November 5" written in text reminiscent of the Game of Thrones title font.

"Winter is coming" is a famous catchphrase from the popular drama series.

HBO responded with a tweet of its own: "How do you say trademark misuse in Dothraki?" referencing one of the languages in the show.

In a statement to Entertainment Weekly, the network said: "We were not aware of this messaging and would prefer our trademark not be misappropriated for political purposes."

The oil sanctions will come into effect on Monday and will target the country's largest source of revenue in the most punishing action taken since the Trump administration withdrew from the 2015 nuclear agreement in May.

How do you say trademark misuse in Dothraki?

Whether Mr Trump was treating the announcement — which will affect the lives of millions of Iranians — with enough gravitas is up for debate, but the internet was quick to react with a host of mock-ups in response.

It is a very hard blow to Iran and its people! Unfortunately the EU does not seem to have a good answer! They should retaliate, close MCDonald, which would be a favour to humanity, stop all possible imports from the US or put big tariffs on them, get US banks out of Europe, and ask for visas for Americans.

The lack of Iranian oil is going to punish all non producing countries through price hikes, which in turn favours Saudi Arabia, Trumps best friend, and the US, amongst others.

It would be interesting to see what would truly happen to the Middle East if renewable energy took over and no one needed their oil anymore...

Iran hits out at US President over impending sanctions

Iran's top leader has lashed out at US President Donald Trump, saying his policies face opposition across the world, as Washington prepared to reimpose sanctions on Iran's vital oil-exporting and financial sectors, state television reported.

Supreme Leader Ayatollah Ali Khamenei also said Iran's arch-adversary the United States had failed to reassert its dominance over Iran since the country's 1979 Islamic Revolution that toppled the US-backed Shah.

"The world opposes every decision made by Trump," Iranian state television quoted Mr Khamenei, a Shi'ite cleric with ultimate authority in Iran, as saying during a meeting with thousands of students.

"America's goal has been to re-establish the domination it had [before 1979] but it has failed. America has been defeated by the Islamic Republic over the past 40 years."

Washington will on Monday reintroduce far-reaching sanctions on Iran's vital oil sales and banking sectors to try to force the Islamic Republic into negotiations to scrap its nuclear energy and ballistic missile programs and end its support for proxies in conflicts across the Middle East.

However, the Trump administration said eight importing countries would temporarily be allowed to keep buying Iranian oil when sanctions came back into effect.

Turkey said Ankara had received initial indications from Washington that it would be granted a waiver, but was awaiting clarification on Monday.

Indian Oil Minister Dharmendra Pradhan said his country and other leading oil importers would benefit from the US waivers.

Most international sanctions on Iran were lifted in early 2016 under a deal Iran signed with world powers the year before under which it curbed its uranium enrichment programme, widely seen abroad as a disguised effort to develop an atomic bomb.

But Mr Trump denounced the nuclear deal, approved by his predecessor Barack Obama, as flawed in Iran's favour and withdrew Washington from the pact in May. Mr Trump's decision was welcomed by Washington's Sunni Muslim Gulf Arab allies, involved in proxy conflict with Shi'ite Iran for decades.

The United Arab Emirates' minister of state for foreign affairs, Anwar Gargash, said on Saturday that Iran's "aggressive policies" were "largely responsible" for the reimposition of US sanctions on Tehran.

We will always need their petroleum, do not forget the petrochemicals. The melamin plates you use for your picnic are made of it.