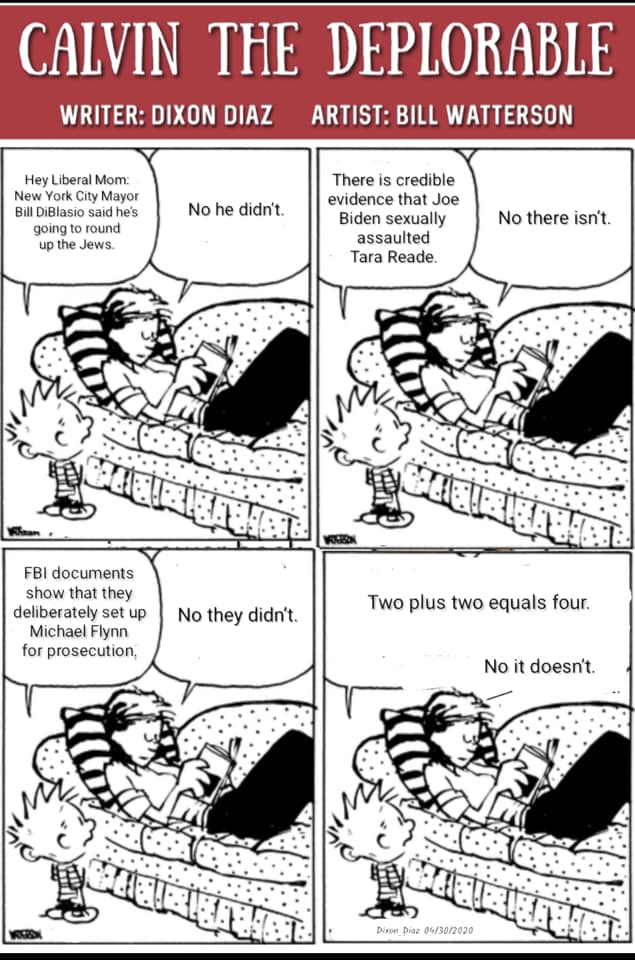 0
ReplyToggle Dropdown
Msg 164 of 331 to ElDotardoElDotardo
In reply toRe: msg 161

I still don't know who Karen is, so if it's an insult, I don't get it.

And you didn't get what Tony said, if you're still banging on about Trump being a racist.

Trump is not a racist.

That was the point of the quote.

0
ReplyToggle Dropdown
Msg 165 of 331 to ElDotardoElDotardo
In reply toRe: msg 162

It is a complete delusion that Trump will ever be held to account for anything he has ever done.

Your delusions have delusions, Karen. You are just as quick to demand consequences for Trump's imagined wrong doing as you are to dismiss the credible charges against a fellow Leftist.

Was Trump right about disinfectants?

On April 23 at the daily COVID-19 briefing, President Trump mused about the possible use of light and disinfectants to combat the virus (video). The mainstream media immediately broke out in a viral epidemic of overreaction, alleging the president had suggested that folks ingest Clorox and other bleaches. If Donald Trump weren’t president, he could sue for such lies. In any event, it appears the president may have been on to something.

On the May 1 edition of Fox New’s The Ingraham Angle, Laura Ingraham focused on the possibility of using “disinfectants” to combat the Wuhan virus. Laura quoted Dr. Burton Dickey, co-founder of Pulmotect: “The drug lands on the surface of lung epithelial cells and signals them to produce superoxide and peroxide for several days… Similar to the way bleach kills germs on a kitchen table, superoxide and peroxide in the lungs rapidly kill germs that are inhaled.”

Ingraham then interviewed the two top guys at Pulmotect Inc., Colin Broom and Leo Linbeck. What their approach is all about is enlisting the innate immune system to fight infection. Here’s Linbeck:

Nature has evolved this really exquisite mechanism for getting your lungs to secrete superoxides at the time they need them… We’ve been able to figure out how to stimulate that, so that we can sorta turn on your innate immunity and put it on high alert. This is your front line defense. And by doing that we can prevent the infection in the lungs, and that’s the game, right. The game here is to stop pneumonia. Pneumonia is what kills people.

And pneumonia is what necessitates the use of ventilators when Covid patients experience the cytokine storm. Laura continued: “We do have innate immunity, and we have to make sure we can trigger it if possible. And that’s what you’re trying to do here, correct?” Linbeck:

The entire segment lasts about 6½ minutes, and to watch it click here and then click on minute 25 on the progress bar. You may be required to sit through a minute of ads. Then you might check out the Pulmotect website.

For the record, at the April 23 briefing the word “disinfectant” appeared exactly four times, and was used only once by Pr
...[Message truncated]
View Full Message
0
ReplyToggle Dropdown
Msg 167 of 331 to ElDotardoElDotardo
In reply toRe: msg 166

President Donald Trump contradicted a nurse he was honoring in the Oval Office on Wednesday, insisting there are no personal protective equipment shortages i...

China and the United States both supported a draft United Nations Security Council resolution confronting the coronavirus pandemic on Thursday and it was "shocking and regretful" that Washington changed its mind on Friday, a Chinese diplomat said.

A member of US Vice-President Mike Pence's team tests positive for COVID-19, but Donald Trump says it shows the whole concept of testing isn't necessarily great.

Barack Obama accuses the US President of approaching the coronavirus pandemic with a "what's in it for me?" attitude, saying Washington's response has been an "absolute chaotic disaster".