US President Donald Trump seemingly increases his estimate of possible deaths from coronavirus to 100,000, up from 70,000 earlier in the week, as South Africa, Spain and some American states loosen their restrictions. These are the key coronavirus developments from today.

A Chinese state media outlet releases an animated video using Lego pieces to mock the US response to the novel coronavirus.

same to you, sweetie, luv you despite your politics

Estimates for a coronavirus vaccine hover around at an estimated 18 months. For people waiting in quarantine, 18 months may seem like an eternity. But the reality is that scientists are working at breakneck speed to make a vaccine, even if it feels glacial to the rest of us. Five trials currently underway are working at an especially quick pace - it's possible that when we do see a vaccine for...

Based on the 'options', I'll go with the Oxford vaccine.

Full disclosure: John Cogan and I were in the same High School class and played football together, and I own shares of Gilead stock . . .

Gilead Sciences failed for years to prove its efficacy, but patent law and markets helped it to persevere. 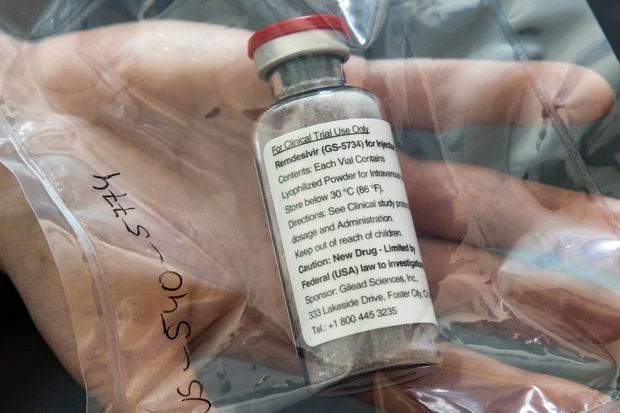 The Food and Drug Administration has authorized the use of Gilead Sciences ’ drug remdesivir to treat severely ill Covid-19 patients. Previously, Gilead announced that it was donating all its existing supply, 1.5 million doses, free of charge. The FDA’s Emergency Use Authorization and the company’s extraordinary action give a tremendous boost to a world in crisis.

Painstaking science has been the biggest factor in remdesivir’s success so far, but America’s market and legal system also helped Gilead make this contribution to human health. In this system, privately owned biotech and pharmaceutical companies, financed by investor capital, seek to invent, develop and distribute new medications. Patent protection provides drug companies with additional incentives over and above those normally provided by the market to undertake the necessary risks. The incentives come from governmental protection of intellectual property and the associated ability temporarily to charge prices above the marginal cost of production. Even so, drug companies and their investors reap rewards from their successes and suffer losses when their efforts fail.

Drug development is fundamentally a process of discovery. Scientists discover what works against disease and how to formulate chemical and biological compounds that deliver medicines to patients. To continue discovering new drugs, pharmaceutical companies must cover the costs of the inevitable failures. About 70% of drugs never make it to market because they prove ineffective or too toxic. Drugs typically gain approval only after many years of development. Charging more than the cost of production, at a price customers are willing to pay, allows developers to recoup these costs.

Remdesivir is a case in point. Gilead’s scientists determined more than a decade ago that the drug would be an effective antiviral, and tested its effects on various viruses. Research on remdesivir as a treatment for childhood respiratory diseases began in 2010. Though the drug ultimately failed in that purpose, Gilead continued to research its potential. Several years later the company discovered that the drug might work against Ebola. But after several remarkable individual success stories, the drug again failed to live up to its promise. Fortunately for patients, other drugs became available.

Despite this setback, Gilead continued its research. Its scientists uncovered evidence that remdesivir might work against two coronaviruses, those behind SARS and MERS. But with the major outbreaks of those diseases having passed, there weren’t enough patients for pivotal human trials.

When the novel coronavirus was identified a few months ago, Gilead immediately began working with the FDA, along with other health agencies in the U.S. and world-wide, to expedite human trials of remdesivir. Meanwhile, the FDA approved compassionate-use access to the drug for more than 2,000 gravely ill patients.

Thus the FDA’s emergency approval of remdesivir comes after more than a decade of dedicated research, overcoming failures and making costly investments. The long development time, unexpected setbacks and mounting costs are the norm in drug development. The costs are funded by reinvested profits and
...[Message truncated]
View Full Message
0
ReplyToggle Dropdown
Msg 220 of 475 to ElDotardoElDotardo
In reply toRe: msg 219

The number of recorded cases of COVID-19 surpasses 3.5 million worldwide, with experts warning underreporting in some countries may be masking the true scale of the pandemic.

The US President said China tried to cover up the coronavirus outbreak before trying to blame other countries for the ensuing health pandemic.