0
ReplyToggle Dropdown
Msg 246 of 313 to ElDotardoElDotardo
In reply toRe: msg 242

0
ReplyToggle Dropdown
Msg 248 of 313 to PAULFROMNYSPAULFROMNYS
In reply toRe: msg 246 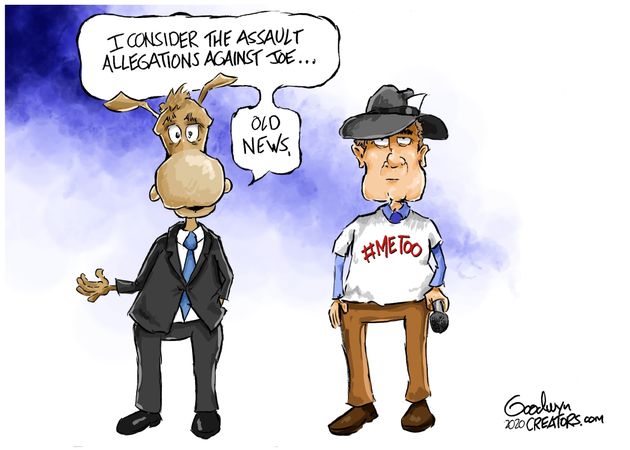 0
ReplyToggle Dropdown
Msg 251 of 313 to ElDotardoElDotardo
In reply toRe: msg 240

Unlike the ordinary conspiracy theory that requires a wild-eyed, paranoid person to connect imaginary dots to create invisible lines, with wildly disparate facts forced together into an impossible scenario, Anton simply points to the Democrats’ own words:

... And then spouts a conspiracy theory that George Soros is behind it all.

0
ReplyToggle Dropdown
Msg 252 of 313 to ElDotardoElDotardo
In reply toRe: msg 249

If this peace deal succeeds, Trump can have a thousand Nobel Peace Prizes!

Proving once again that the da'Nile ain't just a river in Egypt . . .

The 501(c)(3) tax exempt Thousand Currents and ActBlue Charities are supporting Black Lives Matter (BLM) Global Network, which is campaigning openly against President Trump on its website and also in other venues. BLM leader Patrisse Cullors said openly in a CNN interview, "Trump not only needs to not be in office in November but he should resign now. Trump needs to be out of office. He is not fit for office." "…we are going to push for is a move to get Trump out… Our goal is to get Trump out." 501(c)(3) resources cannot be used legally to influence an election.

A response to the tweet with the Cullors interview says, "Thanks, sending this tweet to the IRS so they can see BLM's 501(c)(3) status should be removed." (BLM itself is not tax exempt, but Thousand Currents and ActBlue Charities are.) Another person posted a screen shot of IRS rules, while another added, "So they want tax exempt status, but they are going to pull this?" People can act on this information via Form 13909. California, where Thousand Currents and the Tides Foundation are domiciled, uses Form CT9, "Complaint to The California Attorney General Regarding a Charity or Charitable Solicitation."

The very end (last ten seconds) of this Cullors video says, “We get Trump out of office by leading with bold and creative action.” There is more than ample evidence that BLM is therefore using tax-exempt resources from Thousand Currents, ActBlue Charities and, as of July, the Tides Foundation, to influence the election. While Form 13909 and CT9 complaints have doubtlessly been filed, there is no guarantee that regulatory agencies will be able to act on them prior to mid-October, when people will start to send in absentee ballots. We therefore need to take this controversy viral so voters can form their own opinions in the meantime.

The Tides Foundation Steps In

"We represent Thousand Currents. By this letter, we hereby provide written notice to the California Attorney General in accordance with California Corporations Code §5913 of a proposed transfer (the "Transfer") by Thousand Currents, a California nonprofit public benefit corporation, of all of the assets associated with Thousand Currents' fiscal sponsorship of the Black Lives Matter Global Network project (the "Assets"), constituting substantial assets of