I see that you heeded my warning.

0
ReplyToggle Dropdown
Msg 260 of 315 to PAULFROMNYSPAULFROMNYS
In reply toRe: msg 259

“Over and over again, Donald Trump downplayed the threat of COVID-19 — all while knowing how dangerous it was,” Rep. Ilhan Omar, D-Minn tweeted on Thursday. “Almost 200,000 people have paid the price for his lies with their lives. If he refuses to resign, we will vote him out.”

Omar was referring to the latest tape released by journalist Bob Woodward alleging that President Trump downplayed the seriousness of the coronavirus in public while saying that he knew it was “deadly” and far worse than the flu.

0
ReplyToggle Dropdown
Msg 261 of 315 to SQUADDYBSQUADDYB
In reply toRe: msg 260

The fake news media are so empty of imagination now that they have resorted to rerunning old fake news about President Trump.  Bob Woodward's latest scoop is that Mr. Trump downplayed the virus scare scenarios this spring to prevent panic.

That struck me not as "news," but "olds" — the same fake scandal the media furiously played up in early April about Peter Navarro's worst-case scenario memos.  Trump addressed all this at the time, explaining that he got a lot of contradictory and scary information and wanted to avoid panic.  What else was he to do?

As it turned out, Navarro and others predicting over 1 million American dead were way off.  The latest count of excess deaths, our best measure of real virus-related deaths, is thankfully coming to a conclusion.  Total deaths by end of next month will be in the 200,000 range, and that number is largely the fault of idiot Democrat governors pushing infected patients into nursing homes.

What's coming next week?  Trump and prostitutes urinating on a Moscow hotel bed?

TV rerun season used to be in late summer.  The new programs came in the fall, but maybe not anymore.  That may even give Joe Biden an idea — don't show up to the debates, but just send the networks a VHS of him in 2008 with Sarah Palin.

You probably should skip this one too, Karen . . .

On COVID, Democrats were the ones downplaying the crisis

The media and other Democrats, including all the ones writing  Joe Biden's talking points, know that Dr. Anthony Fauci, the CDC, the UN's WHO, most of the media including Bob Woodward, Biden himself, Dr. Ezekiel Emanuel (a Biden advisor), Nancy Pelosi, Bill DeBlasio, Andrew Cuomo and the rest all downplayed the virus in January, February and early March. Yet today, they are endlessly ripping President Trump for not scaring the public in early February.

They also ripped Trump for his early travel ban on China, calling it unnecessary and xenophobic. With few infections and zero deaths in the U.S.) at the time, they said he was trying to change the subject from their bogus impeachment.

Here is what they were saying then:

Short of that, Fauci says skip the masks unless you are contagious, don't worry about catching anything from Chinese products and certainly don't avoid Chinese people or restaurants.

"Whenever you have the threat of a transmissible infection, there are varying degrees from understandable to outlandish extrapolations of fear," Fauci said.

COVID-19: “No reason” not to go on cruise if you’re young and healthy: Fauci

Dr. Anthony Fauci, head of the U.S. National Institute of Allergy and Infectious Diseases, sought to assure Americans on Monday that it is safe to travel aboard a cruise ship “if you are young and healthy” but said he would advise the elderly and those with underlying medical conditions not to go on a cruise.

I would think that journalists would tire of this as they seek to elect the corrupt, incompetent Biden.

How many books attacking Trump are going to be promoted by the sycophant media as they collude in this election?

When will Woodward and Bernstein report on all the crimes of Obama/Biden and the other bureaucrats who used the fake dossier and massive government personnel and resources as they sought to destroy Trump and elect the criminal Hillary? That is the crime and corruption that dwarfs Watergate. Woodward now is going at it again.

The fake story from Atlantic, based on anonymous sources, is another piece of fiction that was regurgitated by Democrat campaign workers, posing as journalists, as if it was true in their unending effort to interfere in the election.

The media, including social media, is much more dangerous to the integrity of the election than anything the Russians, Chinese or Iranians are attempting to do.

Although Joe Biden was discouraging any action against the virus at the time, he now feels strongly that Trump was in the wrong...

0
ReplyToggle Dropdown
Msg 264 of 315 to PAULFROMNYSPAULFROMNYS
In reply toRe: msg 260

You may consider my comparison unwarranted. If so, consider . . .

What Islamists and ‘Wokeist’ Karens Have in Common

Adherents of both pursue ideological purity, refuse to engage in debate and demand submission. 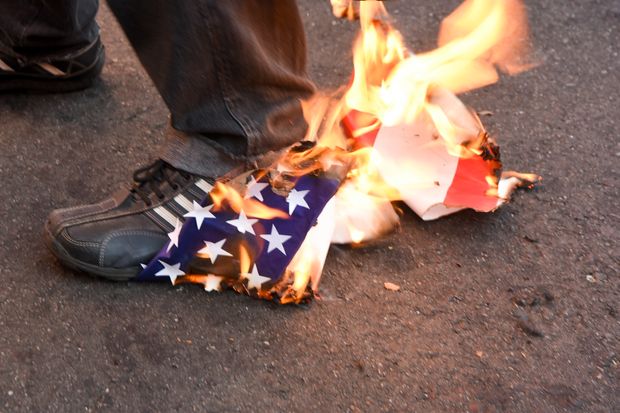 There were many American heroes on 9/11, but the greatest were the passengers and crew of Flight 93. Not only did they avert what al Qaeda planned—a direct hit on the White House—but they also embodied Patrick Henry’s credo “Give me liberty, or give me death!”

Do those words still have a meaning in the America of 2020? For two decades, I have opposed the fanatical illiberalism of those strands of Islam that gave rise to al Qaeda. I broke with my Somali family and ultimately with their faith because I believed that it is human freedom that should be sacrosanct, not antiquated doctrines that demand submission by the individual.

So implacable are the proponents of Shariah that I have faced repeated death threats. Yet I have always consoled myself that, in the U.S., freedom of conscience and expression rank above any set of religious beliefs. It was partly for this reason that I moved here and became a citizen in 2013.

It never occurred to me that free speech would come under threat in my newly adopted country. Even when I first encountered what has come to be known as “cancel culture”—in 2014 I was invited to receive an honorary degree at Brandeis University and then ungraciously disinvited—I didn’t fret too much. I was inclined to dismiss the alliance of campus leftists and Islamists as a lunatic fringe.

But the power of the illiberal elements in the American left has grown, not just on campus but in the media and many corporations. They have inculcated in a generation of students an ideology that has much more in common with the intolerant doctrines of a religious cult than with the secular political thought I studied at Holland’s Leiden University.

In the debates after 9/11, many people sought materialist explanations for the attacks. American foreign policy in the Middle East was blamed, or lack of education and employment opportunities in the Arab world. I argued that none of these could explain the motivations of the plotters and hijackers, who in any case were far from underprivileged. Their goal was religious and political: to wage jihad against their kin if they didn’t accept a literal interpretation of Islam, to denounce Arab governments as corrupt and their Western allies as infidels, and ultimately to overthrow the established order in the Middle East and establish a caliphate.

American policy makers preferred the materialist explanations, as they implied actions to solve the problem: invasion, regime change, democratization. It was unpopular to suggest that the terrorists might have unshakable immaterial convictions.

Nineteen years on, we see a similar dynamic, only this time it is within our borders. Naive observers explain this summer’s protests in terms of African-Americans’ material disadvantages. These are real, as are the (worse) socio-economic problems of the Arab world. But they aren’t the main driver of the protests, which appear to be led mainly by well-off white people.

Their ideology goes by many names: cancel culture, social justice, critical race theory, intersectionality. For simplicity, I call it all Wokeism.

I am not about to equate Wokeism and Islamism. Islamism is a militant strain of an ancient faith. Its adherents have a coherent sense of what God wants them to achieve on earth to earn rewards in the afterlife. Wokeism is in many ways a Marxist creed; it offers no hereafter. Wokeism divides society into myriad identities, whereas Islamists’ segmentation is simpler: believers and unbelievers, men and women.

This is the final call to sanity IMO..  What were experiencing in the last bastions of personal freedom is revealed in these verses of scripture = 2 Thessalonians 2:7-12   For the mystery of iniquity doth already work: only he who now letteth will let, until he be taken out of the way. And then shall that Wicked be revealed, whom the Lord shall consume with the spirit of his mouth, and shall destroy with the brightness of his coming: even him, whose coming is after the working of Satan with all power and signs and lying wonders, and with all deceivableness of unrighteousness in them that perish; because they received not the love of the truth, that they might be saved. And for this cause God shall send them strong delusion, that they should believe a lie: that they all might be damned who believed not the truth, but had pleasure in unrighteousness.

The truth being: GOD is, and a rewarder of those diligently seeking Him.   It is 666 time = unregenerate man in religion, government, and person as the DELUDED reality in this world; as the love of GOD draws out the last possible genuine response to Himself.

0
ReplyToggle Dropdown
Msg 266 of 315 to PAULFROMNYSPAULFROMNYS
In reply toRe: msg 265

All we need now is to get what Nostradamus had to say about all this!

Sure, but what is the depth of purpose in the writings of Nostradamus?  Unbelief will deflect, what will belief do?  What is the heart of things believed without empirical evidence?

0
ReplyToggle Dropdown
Msg 268 of 315 to PAULFROMNYSPAULFROMNYS
In reply toRe: msg 267

What I meant is that it would heap crp on garbage!