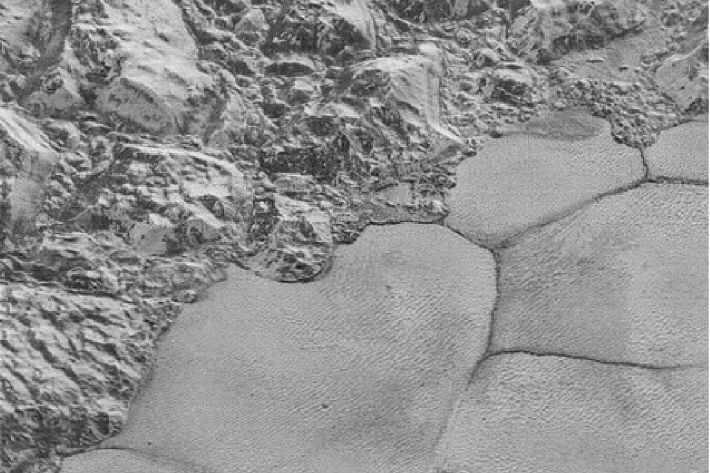 For a minor planet, Pluto throws up some pretty big surprises. The icy world has dunes, but unlike Earth's sandy versions, Pluto's seem to be composed of flecks of methane ice.

Published today in the journal Science, it's the latest in a swag of new discoveries uncovered by NASA's New Horizons spacecraft.

When New Horizons flew past Pluto in July 2015, it sent back detailed images of the icy world's surface.

Matt Telfer at the University of Plymouth in the United Kingdom was one of many planetary scientists and geologists who scoured the pictures for interesting features such as dunes.

"There were a few areas that looked interesting," said Dr Telfer, who co-authored the paper.

"But this one spot, the more we looked at it, we thought 'they really, really do look like dunes'."

Upon closer examination, their location, orientation and spacing all pointed to them being dunes.

But there was a problem: planetary scientists thought Pluto's atmosphere was too thin to sustain the winds needed to sculpt the ripples that were visible.

So how did they appear?

How to build a dune on Pluto

Think of dunes, and you probably picture sweeping swathes of hot sandy desert. Winds whisk sand grains into the air, which fall to the ground in ordered ridges.

On Earth, this happens largely because our atmosphere is thick enough to keep the wind blowing.

But Pluto has a comparatively thin atmosphere — only 0.001 per cent of what we have on Earth. Little atmosphere means weak winds.

Pluto is extremely cold — around minus 230 degrees Celsius — and orbits the sun at an average distance of 6 billion kilometres.

But even the meagre solar energy that falls on its icy surface is enough to warm nitrogen ice on its frosty mountains.

The nitrogen ice turns into a gas in a process called sublimation. Still-frozen methane grains from the slopes are shaken loose and lofted into the atmosphere.

"On the order of a stiff Earth breeze, methane grains around a quarter of a millimetre across will blow around," Dr Telfer said.

Size wise, the methane grains are "on the order of typical Australian dune sand from the Simpson or Strzelecki [deserts]", he added.

Temperature differences in the atmosphere trigger "thermal winds", which keep the methane grains moving along and eventually dump them on the plain below.

Those grains, in turn, kick up more grains and so on, to eventually produce long, thin dunes.

It turns out that Pluto's thin atmosphere, plus its low gravity, may help the dune-forming process. With little gravity or wind resistance to drag or slow them down, methane grains can stay airborne longer.

The dunes are no more than half a million years old, because that's how long it takes the slab of ice they sit on to completely turn over.

But Dr Telfer suspects the dunes are much younger — perhaps on the scale of hundreds of Earth years.

And that particular site is, at the moment, the only place known on Pluto that ticks all the dune-building boxes: a supply of granular material, enough wind to push them around and atmosphere — even a little bit.

This visualization is a brief tour of the global terrain of the planet Venus as revealed by radar onboard the Magellan spacecraft. The height of the terrain ...

A mysterious bow-shaped "gravity" cloud that hovers over mountains on Venus could speed up the planet's day by a couple of minutes, according to a study.

The study, published today in Nature Geoscience, may help explain variations in the planet's rotation seen by different spacecraft over the years.

Venus spins at a leisurely pace, taking an average of 243 Earth days to complete one full rotation.

Measurements taken 16 Earth years apart by the Magellan and Venus Express missions differ by up to seven minutes, said Thomas Navarro, a planetary scientist at the University of California, Los Angeles.

"We have to average the displacement over a long period of time to get an estimate.

"We kind of know what the average duration of the day is, what we don't know very well is how the fluctuations of the rotation rate could make the day vary."

Venus is also hard to study because it is shrouded in thick clouds of sulfuric acid.

Unlike the leisurely pace taken by the planet itself, these clouds rip right around Venus in just four to five Earth days.

"We do not understand much about why the atmosphere is super rotating," Dr Navarro said.

But not all the atmosphere appears to super rotate.

The Quest for the Holy Grail continues 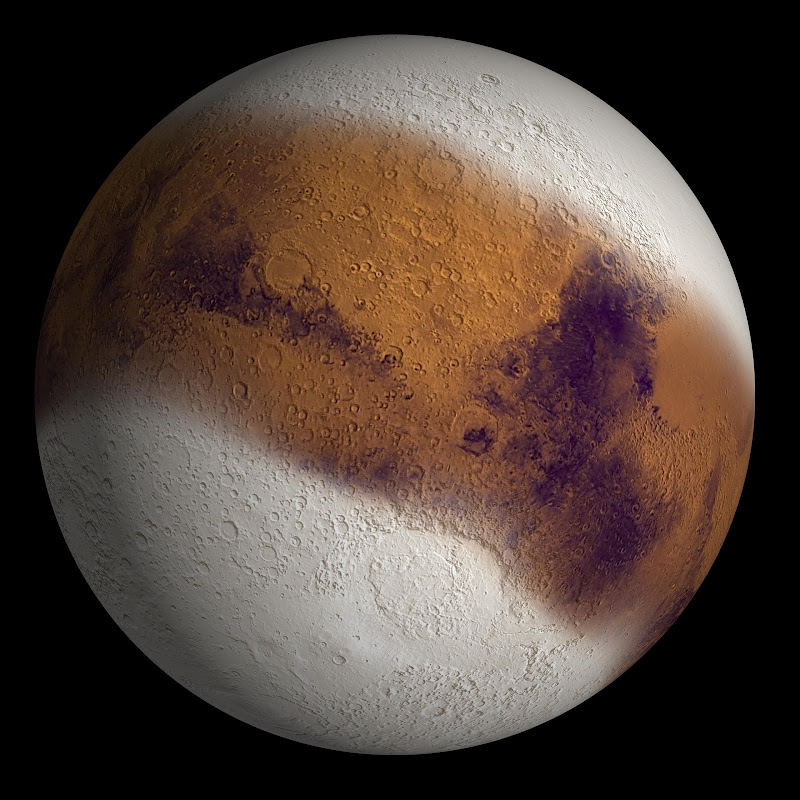 In a massive shot in the arm for the search for life on Mars, a giant lake of liquid water seems to be buried beneath the ice near the Red Planet's south pole.

Using ground-penetrating radar on an orbiting spacecraft, an Italian team picked up signs of a 20-kilometre-wide body of liquid water, hidden 1.5 kilometres under the ice cap.

They published their observations in Sciencetoday.

Whether that body of water is a relic of past oceans or part of a bigger network of subterranean lakes is still a mystery, said Roberto Orosei, a planetary scientist at the Italian National Institute of Astrophysics and lead author of the paper.

"We need to determine if this discovery is unique or if it's something that exists elsewhere on Mars," he said.

Whether it's a one-off or not, he added, has important implications for finding life lurking on Mars today.

"This [bright reflection] is what you see in places like Antarctica, over Lake Vostok and other subglacial lakes," Dr Orosei said.

But whether the Martian subsurface lake is mostly pure water or sludgy sediment remains to be seen.

The MARSIS instrument can't tell us how deep the water is or how much stuff is mixed with it.

It could be pure water, maybe a metre deep or so, or water-saturated sediments tens of metres thick, Dr Orosei said. Both scenarios would produce the same radar signal.

So what can we deduce about the lake?

To stay liquid in such frigid conditions, the lake must be salty.

Blood Moon last night, but I missed it

Curiosity and awe have greeted a complete lunar eclipse, the longest one of this century and visible in much of the world.

The so-called "blood moon," when it turns a deep red, was visible at different times in Australia, Africa, Asia, Europe and South America when the sun, Earth and moon lined up perfectly, casting Earth's shadow on the moon.

The total eclipse lasted one hour, 42 minutes and 57 seconds, though a partial eclipse preceded and followed it, meaning the Moon spent a total of three hours and 54 minutes in the Earth's umbral shadow, according to NASA.

A total lunar eclipse occurs when the Earth's shadow moves across the Moon, blocking out light from the Sun.

"What it actually shows is the solar system in action, and it gives you a bit of a better perspective of your own place in the scheme of things, in the universe," he said.

Astrophysicist at the Australian National University Brad Tucker said a total lunar eclipse is something even experts get excited about.

"The Moon passes into the Earth's shadow and that red colour really is the atmosphere of our Earth covering the light to bed.

"So you're actually seeing … the sunrise and the sunset of the Earth simultaneously," he said. 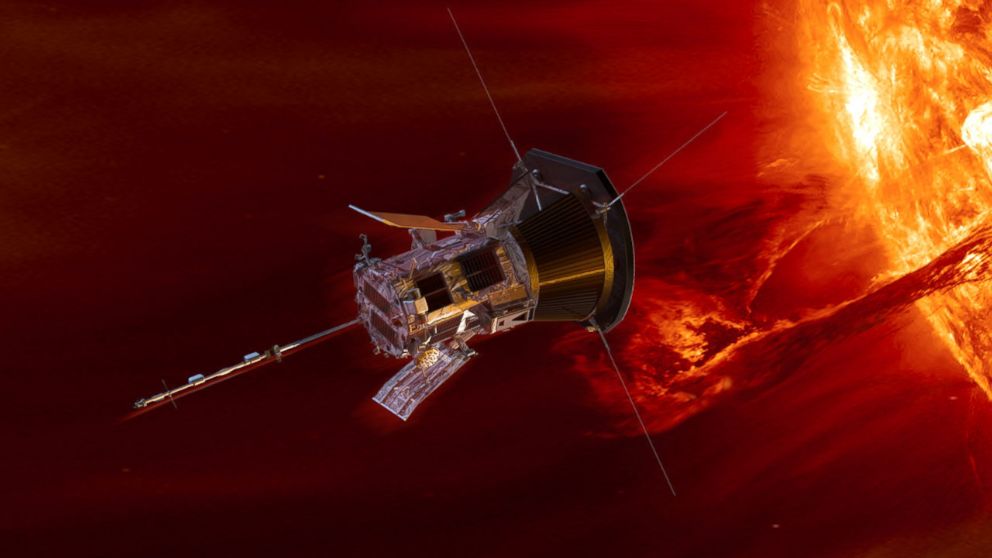 NASA launches probe to give closest look ever at the sun

NASA launched the first-ever mission to get as close as possible to the sun, its corona and solar wind.

I heard it got delayed at the last minute..

Glad they fixed the problem!

'Finally go up and touch the sun'

By better understanding the sun's life-giving and sometimes violent nature, Earthlings can better protect satellites and astronauts in orbit, and power grids on the ground, he noted.

In today's tech-dependent society, everyone stands to benefit.

With this mission, scientists hope to unlock the many mysteries of the sun, a commonplace yellow dwarf star around 4.5 billion years old.

Among the puzzlers: Why is the corona hundreds of times hotter than the surface of the sun and why is the sun's atmosphere continually expanding and accelerating, as the University of Chicago's Mr Parker accurately predicted in 1958?

"The only way we can do that is to finally go up and touch the sun," Mr Fox said.

"We've looked at it. We've studied it from missions that are close in, even as close as the planet Mercury. But we have to go there."

The spacecraft's heat shield will serve as an umbrella, shading the science instruments during the close, critical solar junctures.

Sensors on the spacecraft will make certain the heat shield faces the sun at the right times.

If there's any tilting, the spacecraft will correct itself so nothing gets fried.

With a communication lag time of 8 minutes each way, the spacecraft must fend for itself at the sun. The Johns Hopkins flight controllers in Laurel, Maryland, will be too far away to help.

A mission to get close up and personal with our star has been on NASA's books since 1958.

The trick was making the spacecraft small, compact and light enough to travel at incredible speeds, while surviving the sun's punishing environment and the extreme change in temperature when the spacecraft is out near Venus.

"We've had to wait so long for our technology to catch up with our dreams," Mr Fox said.

"It's incredible to be standing here today."

More than 1 million names are aboard the spacecraft, submitted last spring by space enthusiasts, as well as photos of Mr Parker, the man, and a copy of his 1958 landmark paper on solar wind.