Here's a graph I made to illustrate why 30 round magazines are so popular: 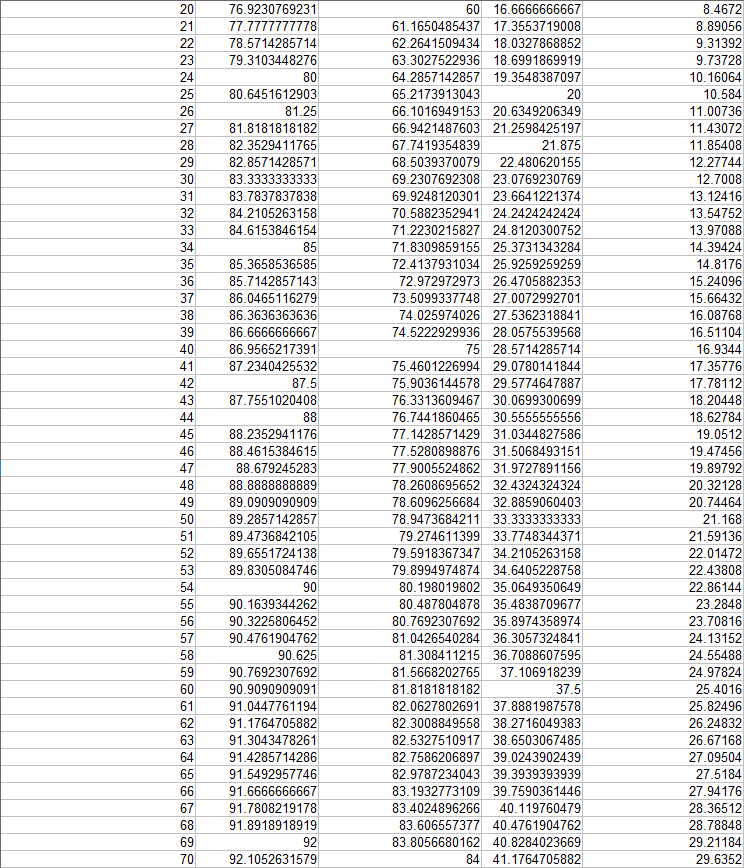 Is "uptime" really a critical measure for an individual combat rifle though?  Riflemen should not be in the business of just dumping rounds downrange as fast as possible.  That's what belt-fed machine guns are for, if it's needed at all. The rifle's main job is aimed fire and riflemen should be taking time between shots/bursts to aim, observe, move, etc. Rifles used for prolonged rapid fire will heat up so quickly that they become effectively worthless long before the impact of "uptime" becomes relevant on the battlefield.

I suspect that magazine height is actually a more important driver of capacity.  That governs how low the gunner can get with a loaded rifle, which is what an infantry soldier I  combat often cares about most. It also explains why we settled on 20-round 7.62 mags and 30-round 5.56 mags; they're about the same height, and about right to aim from prone without digging the magazine into the ground.

Did you notice that the top curve assumes a sedate rate of fire of 45 rds/min? Uptime is a measure of the percentage of the time your gun is up and ready to shoot, as opposed to reloading.

Mag height is the theory everyone's kicked about for years, but it doesn't explain why, for example, drum mags aren't popular among AK users. Reliable, efficient drums have existed for decades, but are rarely seen.

If the height theory is the case, why aren't AK mags 25 rounds? Why are RPK mags 40 rounds?

In fact, shooting prone, I've never had any problem with my AK-74. It's a different posture than a bolt action for sure, but it works fine. AK mags are very, very long, about as long as 40 round AR mags. Yet we don't see 40 round AR mags very often. On the flip side, many drums are no longer than their double stack counterparts, so that doesn't explain the paucity of their use.

In fact, it's only off the *bench* that I find mag height to be a big issue, and then *30* rounders are too tall, which is why I almost always use 20s in that situation. I suspect this is where that idea comes from.

Not to mention, prone shooting is not the primary method of shooting anymore. So you'd expect a return to larger magazine sizes. We're not seeing as much of that as I'd expect.

The thing is, the uptime curve does not show reasons NOT to carry large mags. All it shows is that there are diminishing returns past a certain point, given an average rate of fire. And that helps explain why, despite fairly modest penalties, we don't really see a lot of use of higher cap mags, even though they exist!

So the biggest jump was going from 5/8 rounds to 20, above 20 it looks more like "nice to have" than "combat effectiveness will suffer" kind of requirement.

Had not noticed that it is for 45 rpm.  But honestly, that still seems pretty high, and assumes a rifleman is doing pretty much nothing but fire and reload.  Tactically, that seems wrong.  Riflemen should be spending more time looking and moving than shooting, in general.

Tactically, that seems wrong.  Riflemen should be spending more time looking and moving than shooting, in general.

It's a descriptive measurement of weapon performance, not a prescriptive one. Obviously riflemen don't just dump roughly aimed semi-auto shots into a single target by default, however there are situations where maximizing the sustained amount of firepower a rifleman can put out pays dividends. Think of, for example, a Squad which has been caught in a disadvantageous position by a superior opponent, and needs to put out firepower now otherwise they'll be destroyed - or even the classic example of "human waves" in Korea, where there are targets in the open conducting the final phases of an assault.

It's similar to how the 0-60mph test doesn't tell us how a car will perform in all or even most circumstances, but gives us a good intuitive sense of how the car will accelerate - a measurement like this tells us how much firepower the rifleman's weapon can sustain when he's asked to.

Not to mention that there are a number of forces that have weapons with 30 to 42 round magazine capacities functioning in the Squad Automatic Weapon/Automatic Rifle/Light Support Weapon role.  Not the least of which is the USMC!

Depending on the cadence of fire, yes. For support weapons the biggest jump is from 0-35 or so.