You rejected this design because you were not able to provide a large capacity magazine (something nearly useless for an IW as long as you can have a 20/25/30 rds mag, according to your own analysis),

I created that analysis because of the results I got from Hellcat. I had had the thought for a few years that each round in your magazine does not have equal importance to the shooter. After Hellcat showed that it was probably impractical to reduce the size of the ammunition enough to facilitate very high capacity magazines, I got more interested in what capacity of magazine made the most sense. It seems obvious that the 20-round magazine of NGSW is not enough (indicated by the demand for 30 round magazines in Vietnam, Rhodesia, and other conflicts).

So I thought for a bit about how to quantify that difference in value. Uptime is the most direct way to do that. So Hellcat -> the uptime analysis.

Is this a rational response? Yes, I put different weight on different metrics. Is that a surprise? Wouldn't it be very poor analysis indeed if everything were weighed the same?

Also, you've omitted the real reason I rejected Hellcat: The payoff never materialized. I am willing to accept the drawbacks of micro-caliber ammunition, if there is a substantial payoff. If practical, compact large-capacity magazines are not possible, then the case for this sort of round kind of falls apart.

Also not sure why you're saying no 5.56 round can match that barrier pen, because 5.56 Super does, according to the calculations I'm using. We could argue back-and-forth about whether those calculations are representative, but that was one of the criteria I was using when analyzing Hellcat.

With a short round like the .17 Fireball or the .500 Hellcat, it seems possible to replace "double stack 5.56 mm pouch" with triple or quadruple "side-by-side" pouch, allowing the soldier to carry up to 9-12 magazines on his chest / waist instead of the current 6 (in 3 x double stack pouches).

You can sort of do that, yes. The Hellcat 30 round magazine could be carried four abreast instead of three abreast, but not three-deep instead of two-deep. So you could carry 240 rounds on your chest instead of 180. The 45 round magazines (as everyone who's seen them has pointed out hahahah) are about three inches longer than a 5.56 PMag, so while you can carry 45 rounds in the same way, you also could carry 40 round PMags instead. Here's a size comparison: 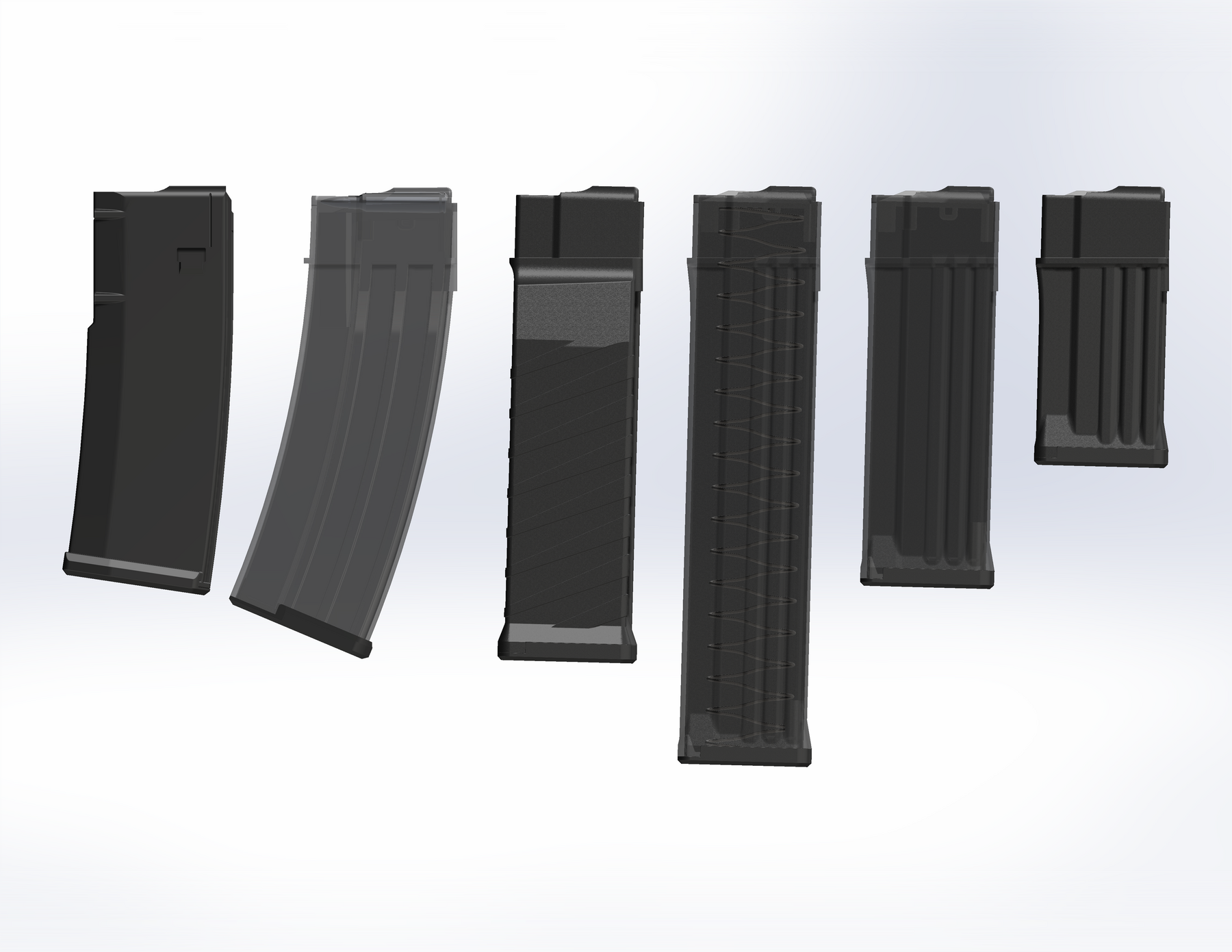 Yeah, the exterior ballistics are great: 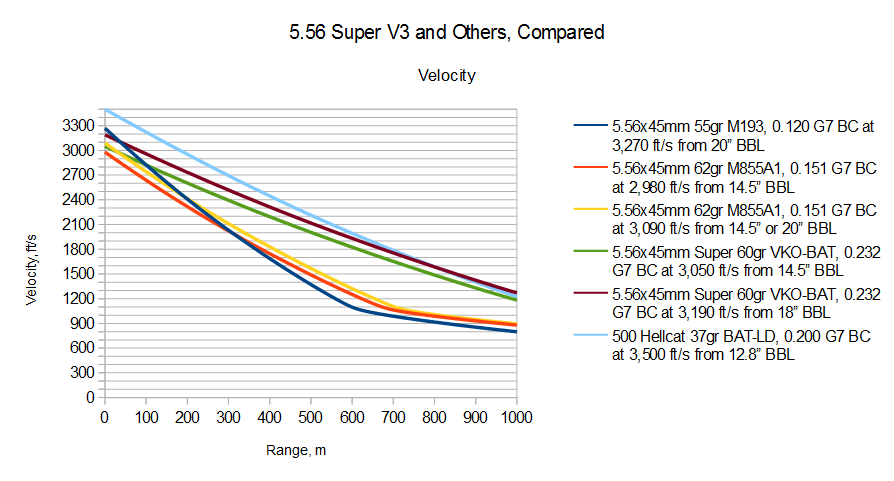 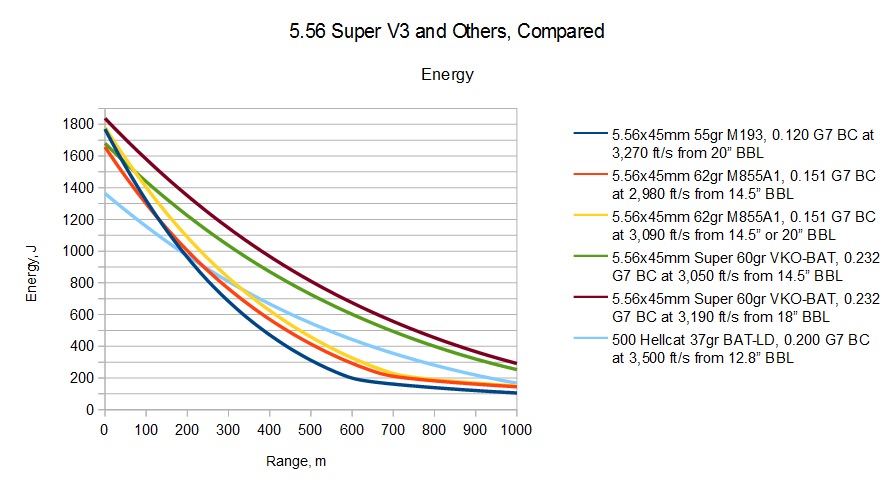 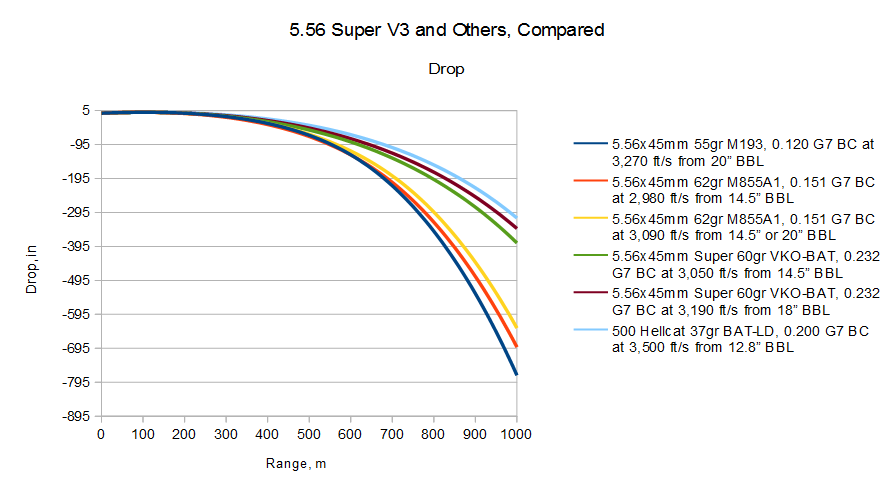 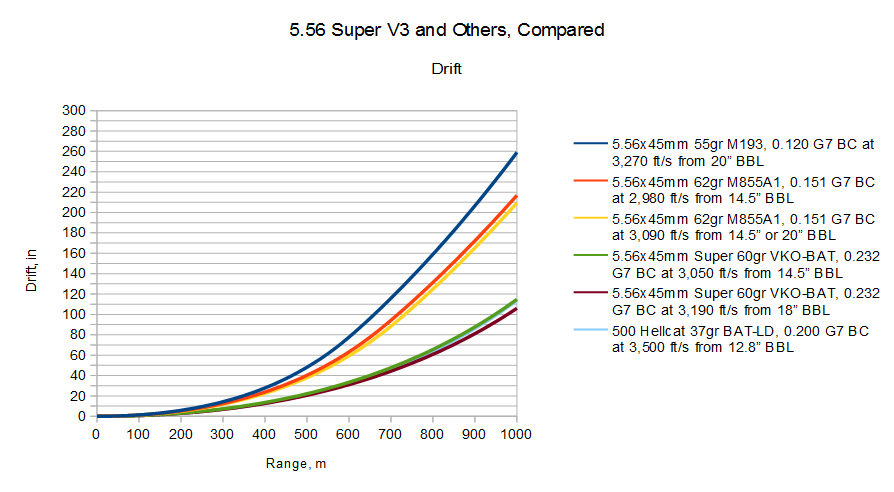 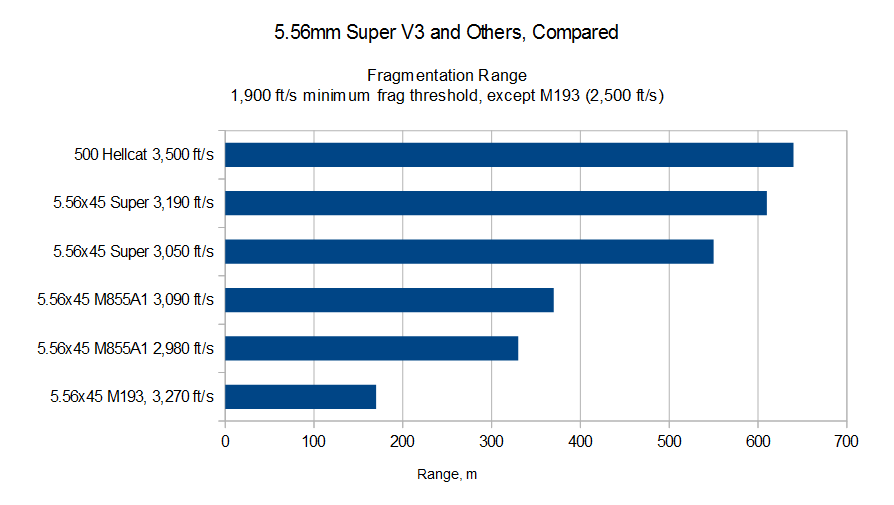 And like, if the 500 Hellcat sounds good to you, I suppose that's fine. But since the ammunition density didn't shake out how I wanted, and there were some real penalties, I decided to pursue other concepts.

you choose to increase the cartridge & weapon weight (and recoil)

Not by much, for the record. Tigershark weighs less than 90 grams more than Hellcat.

And like, I'm not in favor of flechettes, either? So I'm not sure why this is surprising.

How do you calculate frag range? just speed or do you add up another variables?

How do you calculate frag range? just speed or do you add up another variables?

Not 100% happy with the math I used for this analysis, but I am losing interest so might as well post it: 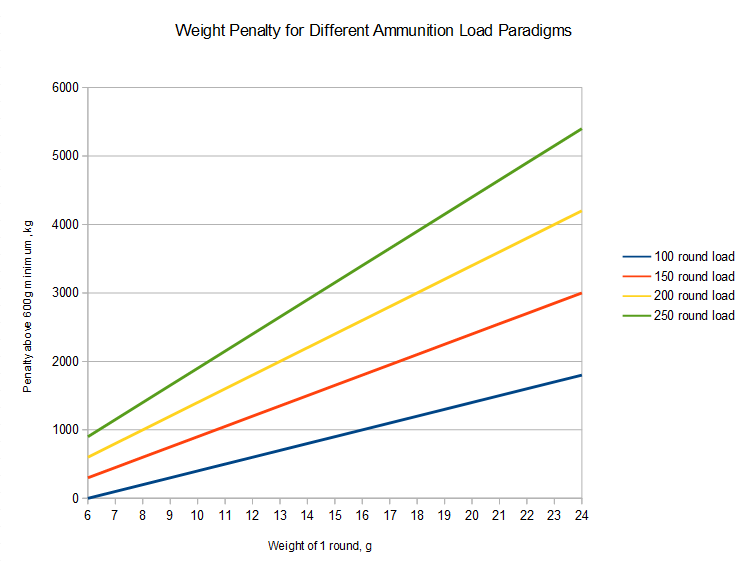 BTW, if you want to execute this concept correctly, you need to start thinking in terms of duplex or triplex ammo, as that dramatically increases the bullet-in-magazine density.

And yes, I've explored this idea too: 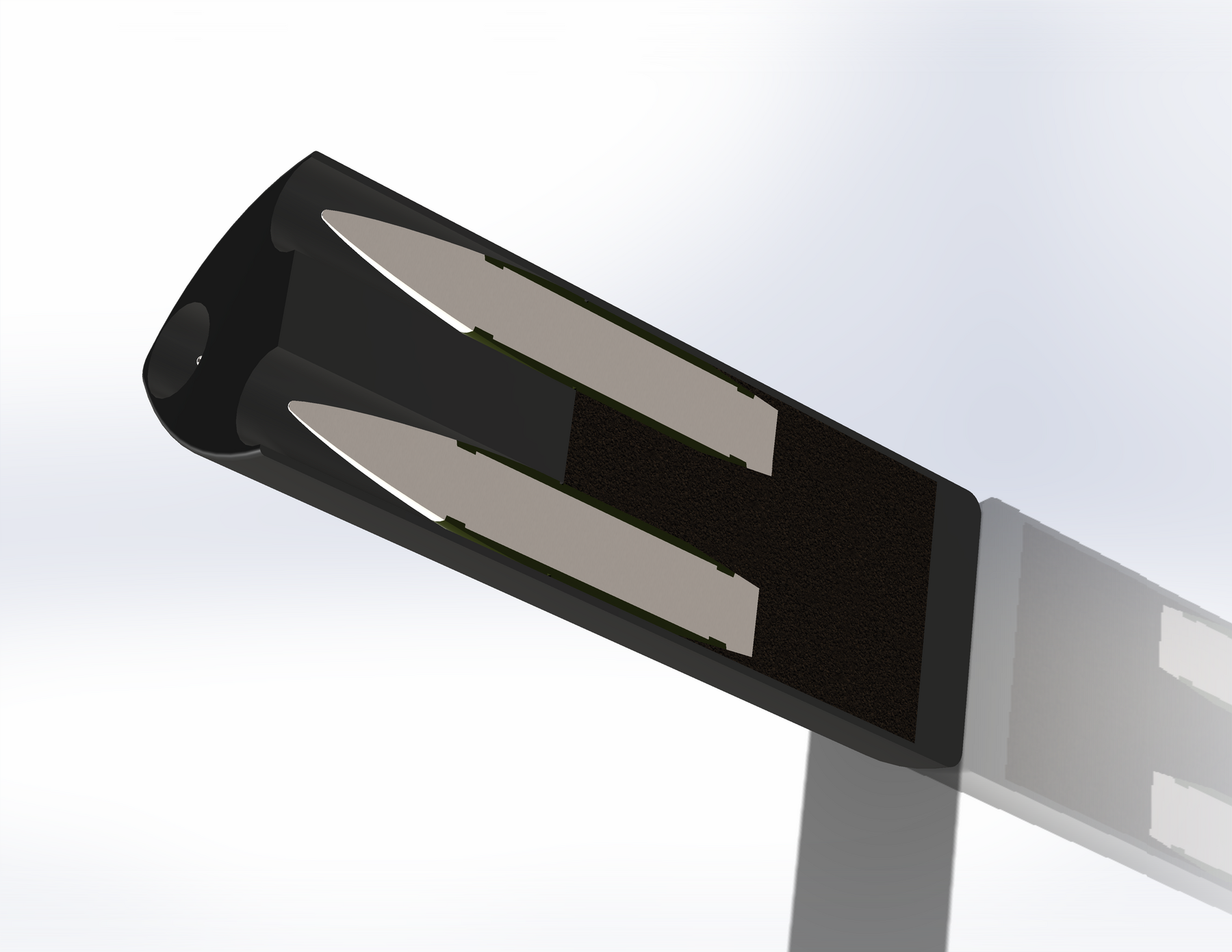 Including some basic studies on firing mechanism.

The big challenge is the barrel, which must have either three bores in very close proximity, or the ability to rotate a cartridge to line up with the bore at very high RPMs.

This is my current favorite proposal: .224 Valkyrie with the COAL increased by forty thousandths of an inch, and the MAP increased to 5600 BAR, and loaded with the Mk3 VKO. The additional COAL enables finer bullets while making sure most of the time you can't chamber the overpressure rounds in regular chambers (which aren't in abundance anyway). Note that the 5600 BAR limit does not impart much of a kaboom risk, but it does impart a stress risk, i.e. bolts will break too soon if you fire a steady diet in a rifle not rated for that round. Difficult to do that if the magazines physically do not fit in the wrong rifles.

What's the point in keeping the original chamber spec? Good question. I have considered several times alternate specs that would prevent the rounds from being chambered at all in existing .224 Valkyrie chambers. I do not believe those solutions make sense. If you're going to do that, you might as well go neckless, which is another idea certainly. But this one has a pathway. I can start empirical work on it for $500 smackaroos. Most of the failure modes are graceful. Performance is great all around (it smashes all the GPC metrics).

I promised you the briefs on Hellcat and Archangel, but work was busy and I had a few days of passing out almost immediately after coming home. But I've finally remembered, so here they are.

A note. The Archangel brief was written before Archangel was designed. It was a pitch to a company that I will not name for me to design the gun. They declined, and I designed it anyway. Nobody ever said I was a great businessman, hahaha. But it gives you a great idea what my goals and thought processes were when designing that gun.

The Hellcat brief was written at the end of 2019 because a lot of people were asking me to bring them up to speed on my projects (Hellcat being then current). The brief includes a basic summary of Hellcat as well as the other guns I had designed to that point.

Thank you, Nathaniel. Would it be also possible to check the renders you posted time ago about archangel and hellcat?