His comments describe the LSAT/CT ammo as a 'black plastic vienna sausage.'

Whats interesting is that in the last few years, all of the LSAT/CT ammo Textron has displayed has been a transparent amber color.

So its possible his testing (if it happened) was years ago. 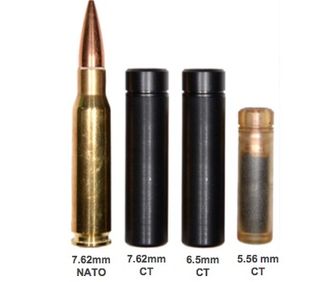 Why can't we?  Is it reasonable to conclude that 2/3 of the contenders for a lucrative contract voluntarily chose to drop out of the competition, because they didn't exhibit their candidate weapons at a trade show?

Stan, I do not believe any of the entrants have dropped out, I was just collating the various rumors' around the NGSW, now that we are in the final stretch

If you read his comment he did see an accuracy drop off, he was shooting 3-4 MOA, so it's not out of the question that it's too inaccurate for the stringent requirements set for NGSW,

As has been noted, there is justification to question his credibility, so it is not out of the question that accuracy is better than h claims.

Does anyone here know how accurately 6.8 CT ammo shoots?  And have you seen the accuracy specs in the requirements document?

I meant when you read Emerics comment reporting the results of his neckless ammo experiment (He said it was 3-4 MOA) and then comparing it to the "USAMU Tester", and yes In an earlier post I attached an image of the draft requirements about the MOA requirement, it seems to be about 1.7 MOA

Yes, I saw that image.  However, it is a draft of a request for proposals, not a requirements document.

The RFP lists "desired goals" -- a brief summary of the main performance and characteristics they hope to get -- but doesn't go into detail.

The requirements documents I have seen went into much greater detail, and specified "threshold" (i.e., minimum acceptable) and "objective" (i.e., what they hope to get) performance.

We definitely know his accuracy claims about the GD entry are wrong since guns and ammo just did a feature on their gun and is talking about 1 moa consistently including flyers.

Unfortunately we don't get to see it's insides in the article.

So between someone pointing out the black Vienna sausage thing and this, at best we have another 6.8 spc grade USAMU guy if he was AMU at all.

As someone just old barely old enough to remember fairly reputable gun guys swearing that Glocks and other "Plastic frame guns" were going to prove to have horrible longevity any day now in the era I cut my teeth in, it's starting to look like the hordes coming out against "plastic casings" are pretty much just this generations grey beards bitching because it's new and scary and they don't like it.

The problem being, the gun industry is a very small place dominated by perception not actual reality so these disparate angry old men could genuinely fuck up a good thing.

I meant when you read Emerics comment reporting the results of his neckless ammo experiment (He said it was 3-4 MOA) and then comparing it to the "USAMU Tester", and yes In an earlier post I attached an image of the draft requirements about the MOA requirement, it seems to be about 1.7 MOA

- After firing the neckless round, we loaded the same bullet with the same powder load in a conventional brass case, and fired those rounds from the same gun. While the accuracy was improved, the difference was not very significant.

- One problem with the "USAMU tester" comment is that both Textron and True Velocity rounds are put in the same basket, but the TV round is pretty conventional in the way it sit in a properly designed chamber.

Thanks for the primary source response Emeric, this has really cleared up any doubts surrounding the supposed accuracy issue, As I said before, I am not a personal believer in this theory, the post was to encourage discussion in this forum to get to the bottom of this, and it seems like we have