The aim was to reduce the recoil of the contemporary 5.56mm ammunition to make the rifles more controllable in burst fire. To achieve this the bullet weight was reduced from 55 to 37 grains by making it from steel with a plastic core, yet the much improved FF meant that the BC remained the same. Little more than half the propellant was needed to match the muzzle velocity of the M193 so the cartridge case could be shortened to leave room for the long bullet, and the chamber pressure was so low (39,000 psi instead of 52,000) that the use of an aluminium case became feasible, leading to an overall reduction in cartridge weight of 50%. The trajectory remained the same, but the recoil impulse was reduced by 35% (equivalent to a reduction in free recoil energy of over 60%).

The Army has also confirmed that the suppressed XM5 is 36 inches in overall length with a 13.5-inch barrel.

The XM250 has a 41.87-inch overall length (with suppressor) and a 17.5-inch barrel. The weapon’s stock is no longer side folding, reportedly due to Army length requirements, and the weapon is “not considered [to have] a quick-change barrel like the M249.”

gee that is one heavy loadout

The gun will definitely be heavy.

Yeah sure, but when people are already going to slingster style padded slings to spread the load of their 5.56 rifles including me it definitely says that even fully kitted 5.56 m4a1's are probably heavier than is really ideal.

Rifle and ammunition weight doesn't exist in a vacuum and I think that we're about to find this out in a big way.

stancrist said: No, you absolutely do not need another weapon. You only need another barrel, one that has the correct rifling twist for the bullet.

The US didn't adopted a "M16A1 with a new barrel", they adopted the M16A2, which is another rifle.

Yes, that is quite true.  However, the M16A2 does not just have a different rifling twist than the M16A1.

The M16A2 differs from the M16A1 in that numerous changes/improvements  were made to the design.

Except for the caliber, the M16A2 was an almost completely different rifle than the M16A1.

You're wrong on both counts. But if that minor detail is of such great importance to you, here are cartons labelled 5.56mm: 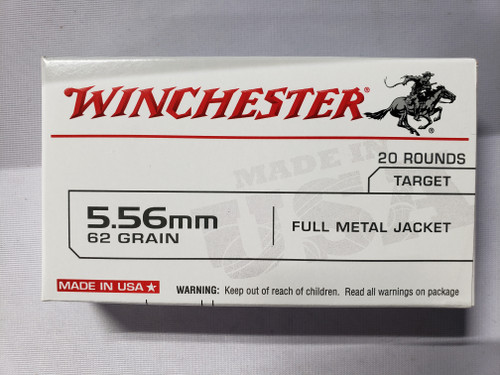 stancrist said: I did not say NATO adopted 5.56 "to please" the US. I said NATO adopted 5.56 because it was a standard US caliber. The only reason there was NATO interest in 5.56x45 was because the US had adopted and was using that cartridge. If 5.56 had never become a US standard caliber, it's extremely improbable that NATO would have wanted to adopt it.

As the US is the main driver behind NATO, and forced the initial adoption of the 7.62 x 51 mm (against the will of a significant number of NATO countries) in 1954, only to adopt the .223 Rem less than 10 years after (and without any considerations to other NATO countries), I think that it's not arguments, but self-fulfilling prophecy.

Call it "self-fulfilling prophecy" if you like, but the fact remains that the only reason 5.56x45 was adopted by NATO is because it was a US standard caliber.

The Belgians would never have developed the SS109 loading if 5.56mm had not been a US standard caliber.

Rifle and ammunition weight doesn't exist in a vacuum and I think that we're about to find this out in a big way.

It should prove interesting.

I see they apparently dropped the original 210-round basic ammo load nonsense.

That helps a little with soldier carry load, but at the expense of combat endurance.

Yes, combat endurance is something that's a very key interest of mine.

In the case of the machine gunner load 4 100 round nutsacks is probably ok but the rifleman load seems pretty lacking to me personally.

In the case of machine gunners, the ability of 6.8 to turn cover into concealment versus the 5.56 m249 it ostensibly replaces is likely extremely worthwhile.

I personally think pairing 6.8 belt feds and DMR's with 5.56 carbines could be workable but doing both the rifleman and gunner seems like combat persistence will take a dangerous hit.