If the M993 or .338 AP would be hot loaded to the same extend as the SmK(H) they would certainly outperfom it.

The Time Traveler tungsten technology of the SMKH really is better then whats in M993, at least for surviving impact with ceramics.

At basically all velocities I've seen tested by Buffman, the M993 shatters (even when it penetrates a plate it does so as a collection of fragments.)

The SMKH in both tests zips through the plate with relatively minimal energy loss, then zips through the clay backer behind the plate, and the core is never seen again - very suggestive that its not shattering or even that deformed by slamming into ceramic.

Hence my belief that theres more at work here then core weight / length / energy. But rather that the formulation of the core, and its method of sintering (or alloying or magic), produces a much more ceramic impact resistant penetrator.

The penetration diagrams (as a function of the impact angle) of both the 15 mm H-Pzgr and the 30 mm H-Pzgr are very steep, much more than the slope of comparable steel core AP ammo, so I still think that those very hard WC-Ni cores are not performing "as well" as softer WC-Co cores against sloped armor (but it's just my opinion).

This could be the case.
But again the type of steel used is of conciderable importance. If face hardened plates have been used it would have made a conciderable difference.

Depends on the alloy and exact heat treatment.

After that, the steel starts to behave like a brittle medium

If they are trough harneded.
Usually high hardness armor is face hardened. 500+ HB 10-3000 is pretty common for modern armor material. With extremes going up to 600 and these plates do not shatter... at least not if they are not made in China.
Armor penetration is extremly complex. Lots of variable and usually the information available to the public and especially on the internet doesn't define them. So its really difficult to compare.
This is also why a batch of steel for use in armor is being tested for its balistical properties befor being released for manufacturing.

I need to review again the literature of the "Stiletto" company, They claimed impressive AP capability for their rounds, but I don't remember the kind of WC they were using

If you've got better / more in depth data on them that would be awesome.

Their website makes pretty astounding claims, it would be great to know how grounded in reality they are. The SMKH in both tests zips through the plate with relatively minimal energy loss, then zips through the clay backer behind the plate, and the core is never seen again - very suggestive that its not shattering or even that deformed by slamming into ceramic.

I agree.  However, the plate had already been hit by three, very high velocity/energy rounds, I think the armor had been effectively destroyed before the SMKH test.

Notice that the SMKH bullet hit right on the edge of the back face bulge caused by the M993 bullet.  It seems very unlikely that the SMKH actually hit intact ceramic.

If you've got better / more in depth data on them that would be awesome.

Great info as always, thank you. Based on those specs, does that seem to offer comparable or better performance to the ADVAP style exposed tungsten tip bullet from the GD slide?

Similar to M993, they are binding it with Cobalt (as opposed to the Nickel of the SMKH and you said SLAP).

I wonder whether their core is similarly vulnerable to shattering on impact with ceramics as the M993 core is?

Heres the best video example of M993 shattering. It penetrates the plate, but enters the gel as multiple fragments, rather then a solid core. 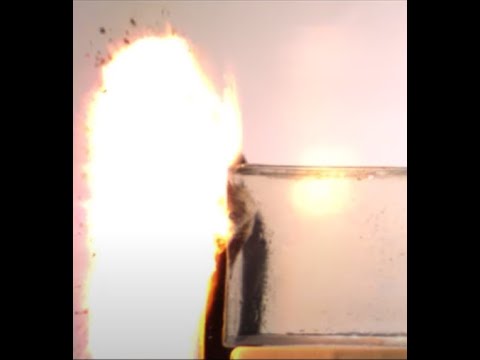 Unfortunately, I can't answer that question.

EDIT : with the above set of hypothesis, a .277 Fury ADVAP is duplicating the performance of the XM948 SLAP up to 500 m, and is slightly better after 500 m due to it's higher BC.

Why concern? In the picture the penetrator fragments look awefully effective.
It might even be intentional to get good behind armor effect?

One of the main functions of the Cobalt in the WC Co sinter mix is to increase the resistance to impacts. To improve the flexibility and ductility of the material. Prue WC is very hard but very brittle. This is why there are different mixtures of WC and Co available for different uses.

I am not convinced that a WC-Ni-Fe mixture would give better shatter resitance.

The material EmericD mentions, TSF22, also is a tool grade WC-Co mix. With ~8 % Co. Special about it is the super fine graine structure. Its about as hard as you can get without using pure WC.

What I find intresting is that is seems nowadays the ammo manufacturers just use tool grade WC materials they can purchase on the market. My guess is they don't even shape the penetrators themself. They just order them from a company specialised in sintering. The ammo manufacturers just assemble the cartidge from parts that are delivered to them.
This of course has implications for the performance. The tool grade WC materials are all a compromise tailored for one specific application. Which is why milling workshops usually have a selection of different cutting tools. But armor penetration is a very complicated process and unlike milling in a workshop the surounding factors are not known in advance and can not be controlled. So its virtually impossible to select the ideal penetrator material in advance. Actually it seems necessary to pick the best compromise that will allmost allways work in a usefull way.
Getting trough hard ceramic plates but shattering and working fine against steel armor might be such a compromise. Allthough for the M993 I rather think penetration of ceramic body armor has not been a factor at all concidering the time of development.

Why concern? In the picture the penetrator fragments look awefully effective. It might even be intentional to get good behind armor effect

The issue is that Ceramic plates function by shattering penetrators into 'un-piercy' sized fragments that can then be caught by the UHMWPE backer.

So they key for Ceramic defeat is a penetrator that can survive its impact with the ceramic to the fullest extent possible.

In that M993 test, it was able to make it through. But many other M993 tests from Buffman have shown failure due to shattering.

Very cool that you will be conducting ceramic testing; hoepfully you can report back but understand if you cant.

Not sure which armor you will get to test. But the Iranian armor found in Ukraine, along with the various Level IV Chinese plates readily available on Aliexpress I think should be looked into as probable 'adversarial' systems. Adepts Colossus plate might be worth trying too as a harbinger for future advances in armor.

Thank you for doing the .277 ADVAP calculations; those are extremely impressive performance estimates.

Based on your calculations, what do you expect that .277 ADVAP projectile would weigh? I imagine a good bit heavier than the steel/copper 6.8 'GP' EPR projectile?