Any new trends in military firearms lubricants for small arms ?

The failure of the .338 Tungsten AP load against Chinese Level IV jogged a memory of mine from SHOT 2020.

At the show, Ammo Inc had displayed a number of Level IV plates that their new AP ammo had penetrated. I had forgotten about it, figuring their stuff was run of the mill Tungsten.

Well, now upon looking, their Level IV killer was the HAPI - a novel Tungsten API developed by SW Kenetics: 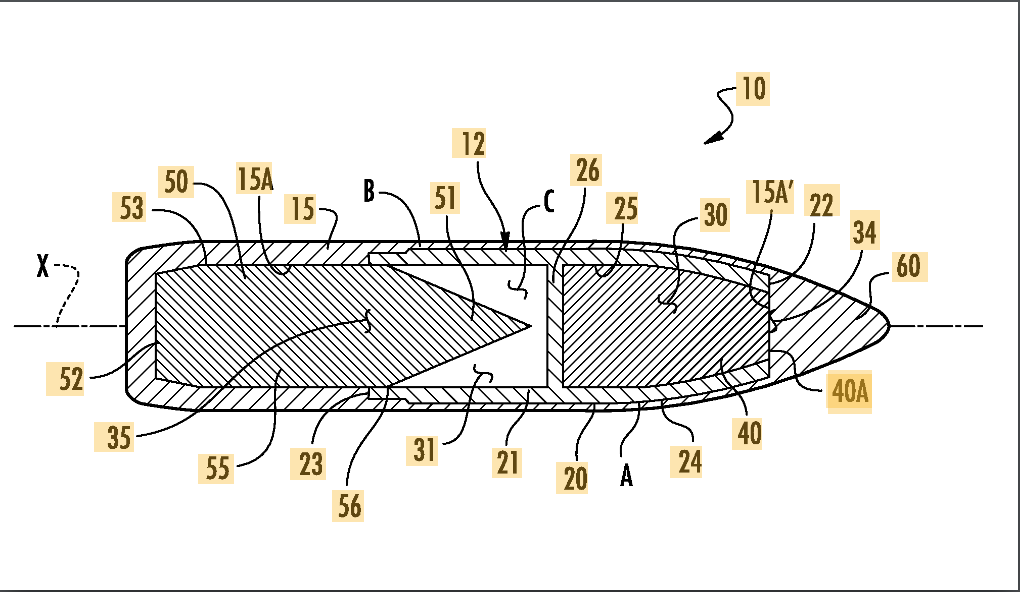 The gist being that the HAPI operates sort of like a Tandem Charge, where the forward mixture blasts/burns a path to weaken the armor, which the Tungsten core then punches through.

This, on its own, does not seem particularly revolutionary.

Yet, the sales guide for the round offers some remarkable claims; begin page 15: 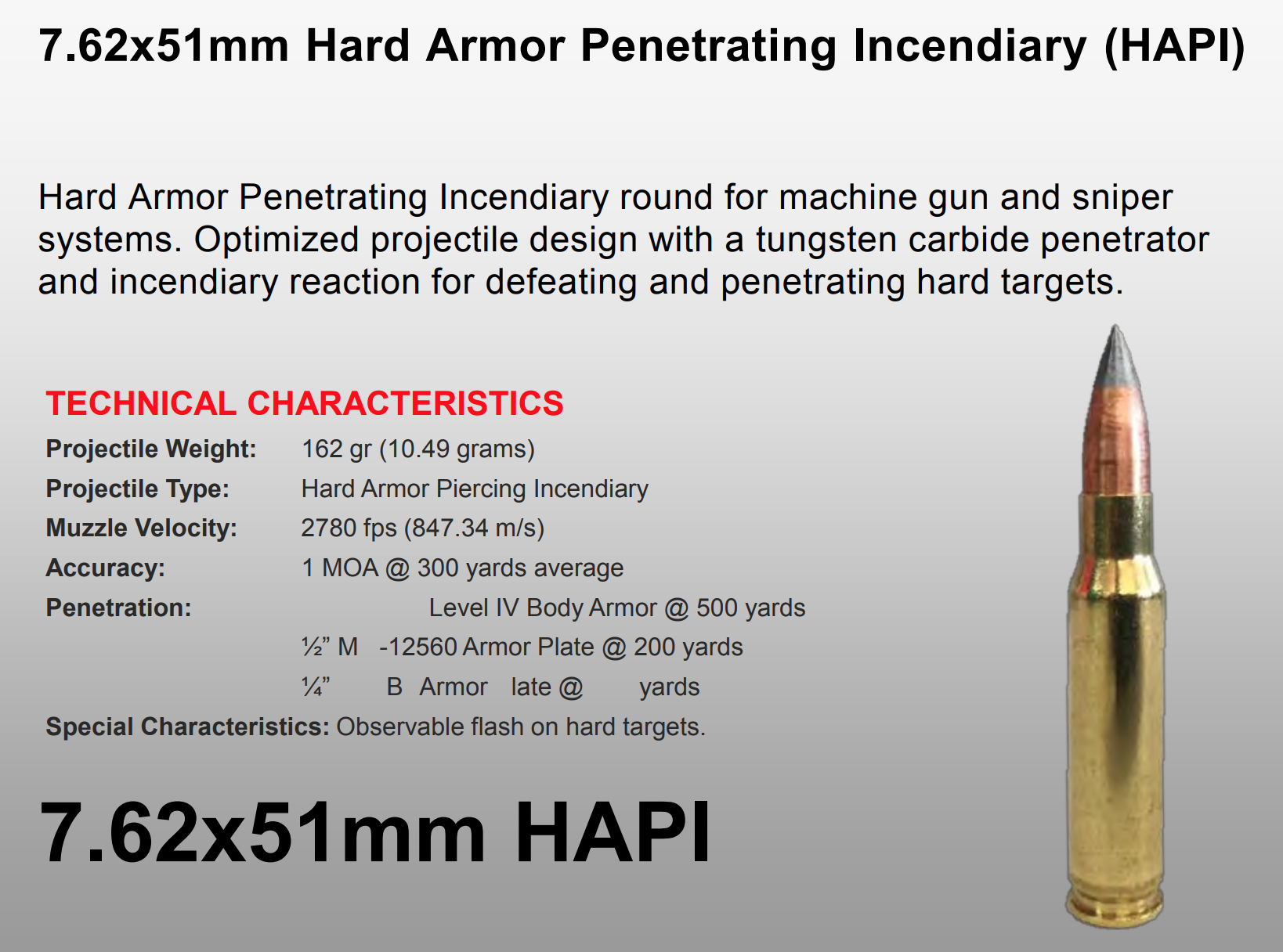 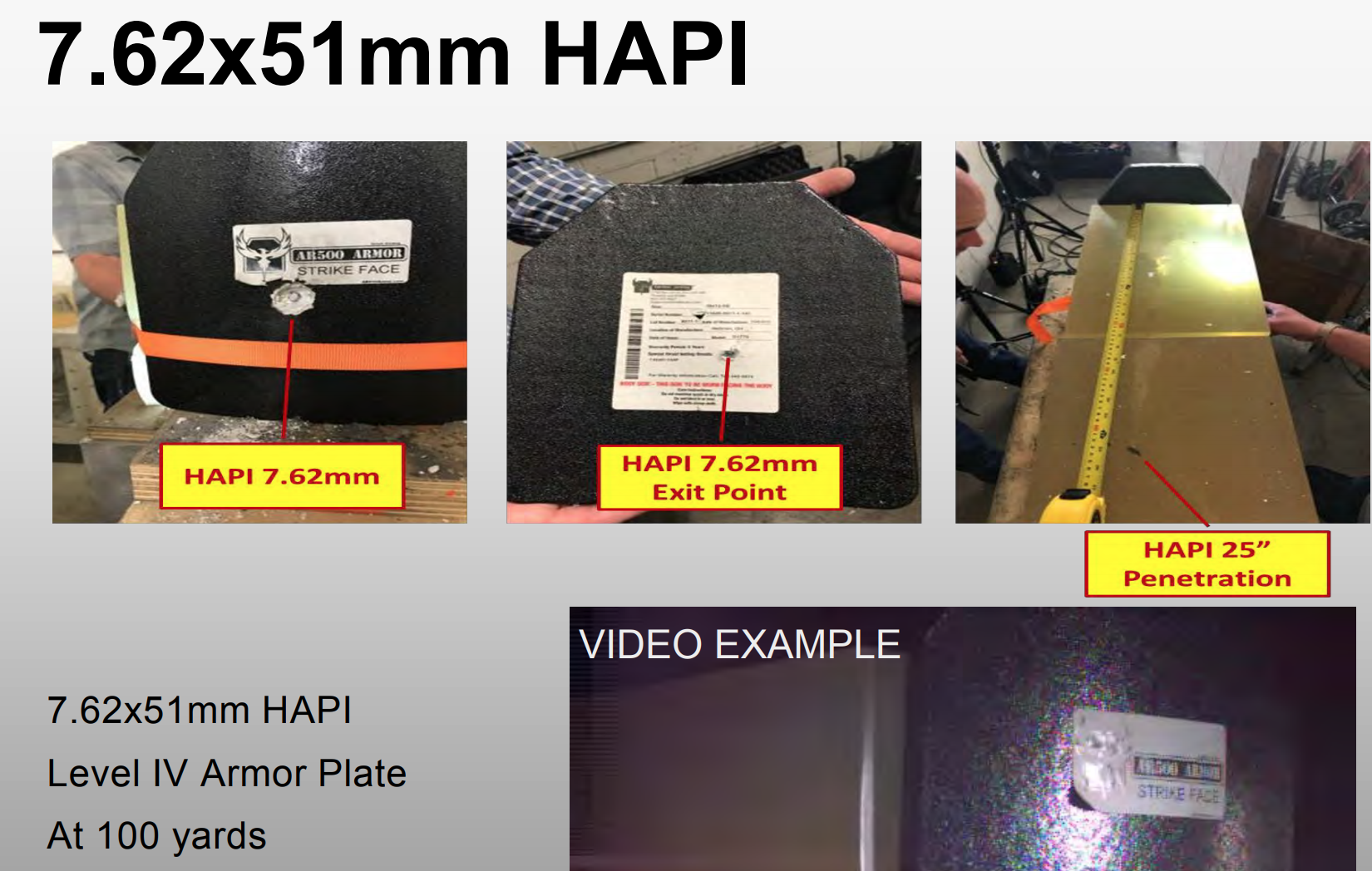 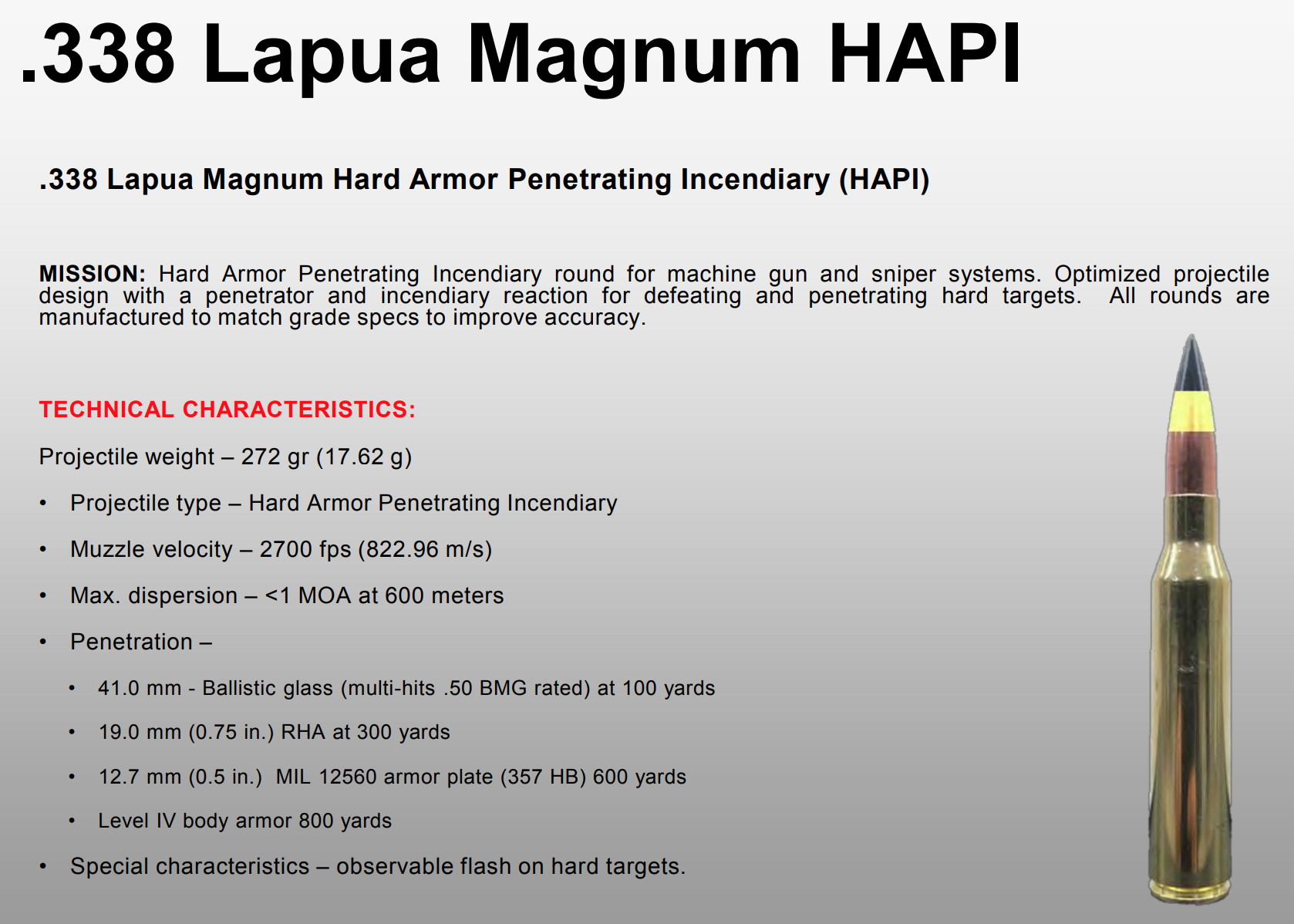 And claim that the .50 HAPI exceeds the classic Raufuss in penetration: 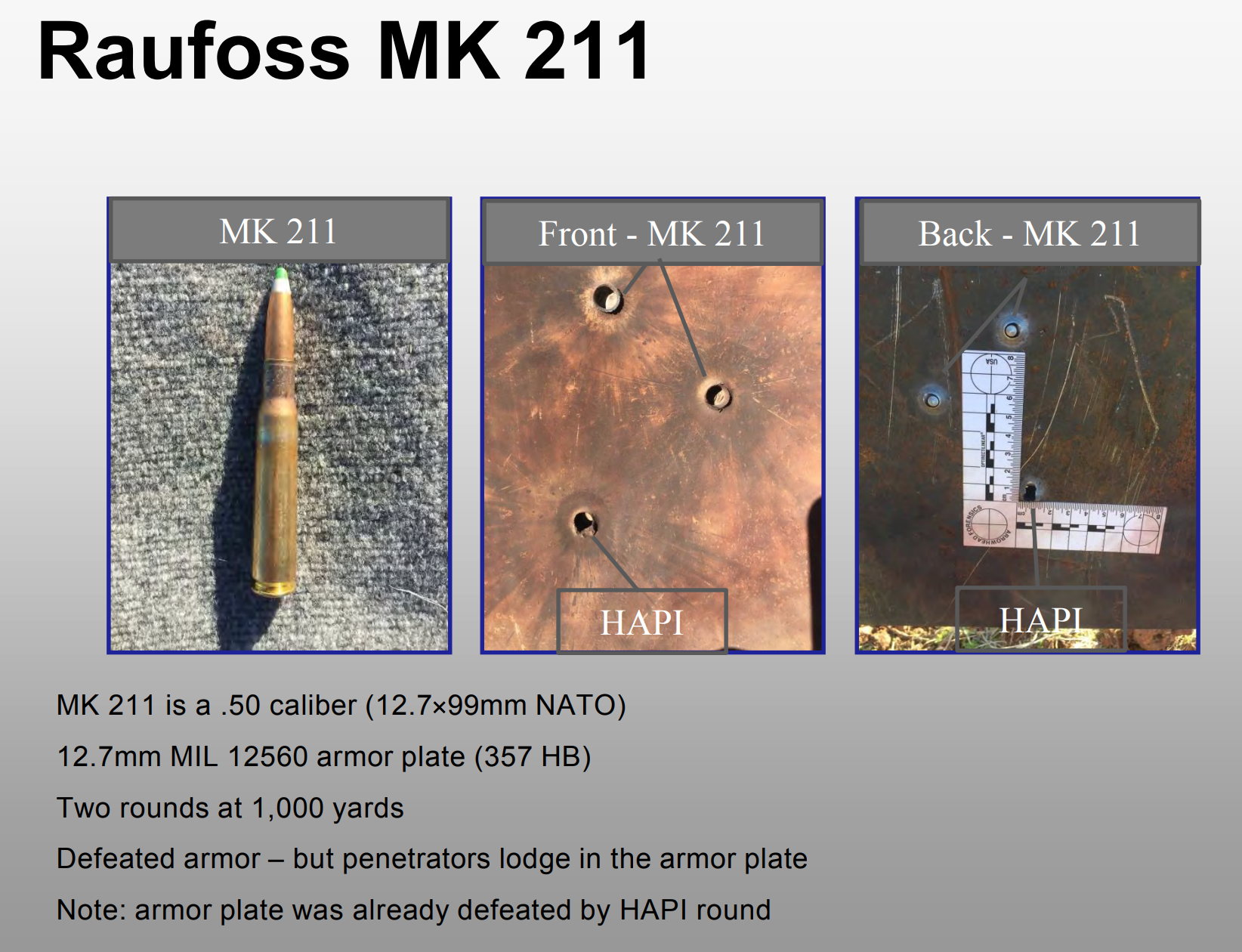 Normally I take ammo manufacturer claims with a hefty does of skepticism.

On the other hand, while ammo manufacturers have been fleecing civilian shooters for generations, lying about military specs seems pointless. Civilians can't buy the ammo, and the military would test it prior to purchase to make sure it worked.

And Ammo Inc did buy SW Kenetics to acquire this patent, something that they probably wouldn't do if they technology didnt work.

Whats especially interesting is their 7.62 API load claims level IV armor penetration at 500yd, while their 7.62 AP offers no claim of Level IV at any distance - yet both claim the same level of steel penetration:

So, perhaps they've developed some Incendiary mixture that attacks ceramics?

The composition of typical Level IV plate is 2 layers; ~0.3" of ceramic tile, backed by ~0.7" of UHMWPE. Right now, the ceramic smashes/deforms the pentrator, and the UHMWPE backer catches it.

But of this new mixture is able to sufficiently degrade the ceramic prior to penetrator impacting, it would be able to easily pierce the UHMWPE backer, which by itself can be pierced by basic M855.

0
ReplyToggle Dropdown
Msg 2 of 6 to gatnerdgatnerd
In reply toRe: msg 1

I can see the ICRC reacting to this one. A round designed for anti-personnel use with an incendiary element?

Suddenly anything less than 300NM or .338LM seem like obsolete for sniping over 600+m

Against unarmored, this still goes

0
ReplyToggle Dropdown
Msg 4 of 6 to gatnerdgatnerd
In reply toRe: msg 1

Normally I take ammo manufacturer claims with a hefty does of skepticism.

Especially when they're shooting plates from a company that has arguably the worst reputation in the industry, at least in terms of products performing as advertised.

On the other hand, while ammo manufacturers have been fleecing civilian shooters for generations, lying about military specs seems pointless.

The likely target audience was in the name of the PDF.

So, perhaps they've developed some Incendiary mixture that attacks ceramics?

Did that "level 4" plate that they allegedly used the .308 HAPI on look like ceramic to you?

0
ReplyToggle Dropdown
Msg 5 of 6 to MustrakrakisMustrakrakis
In reply toRe: msg 4

Well, there is white dust in the impact crater, which we typically see from ceramic strike faces.

Looking back in the photos I took at SHOT 2020 last year, I have this photo from their booth. They are displaying a Paraclete Level IV ceramic that they claim to have penetrated at 300yd with their round.

0
ReplyToggle Dropdown
Msg 6 of 6 to gatnerdgatnerd
In reply toRe: msg 1

Keep in mind not all tungsten ammo is created equal. M995 can penetrate L4 at very close range. I don't know if that Chinese armor was created fora higher threat level than L4 but I also wouldn't freak out just yet.