So why use RCL instead of RPG?

Well, in the US Armed Forces, there seems to be institutional dislike of exposed warheads.

Other than that, I don't know, but I would guess differences in accuracy, time of flight, etc.

441D fires a 5.07 lbs (2.3kg) projectile with 590g HE fill of PBXN-110, steel body containing an additional 800 steel pellets. Body splinters into fragments approximately the same size as the pellets (unknown if PFF / scored internally).  Safe to 40m, fully armed by 70m, not supposed to engage targets closer than 200m

Great info, thank you! I'm going to copy that into my notes.

Does anyone know the HE fill for the LAW Anti Structure M72A9? I know the 'reduced caliber' ASM is 400g HE, curious what the full size ASM brings to the table. 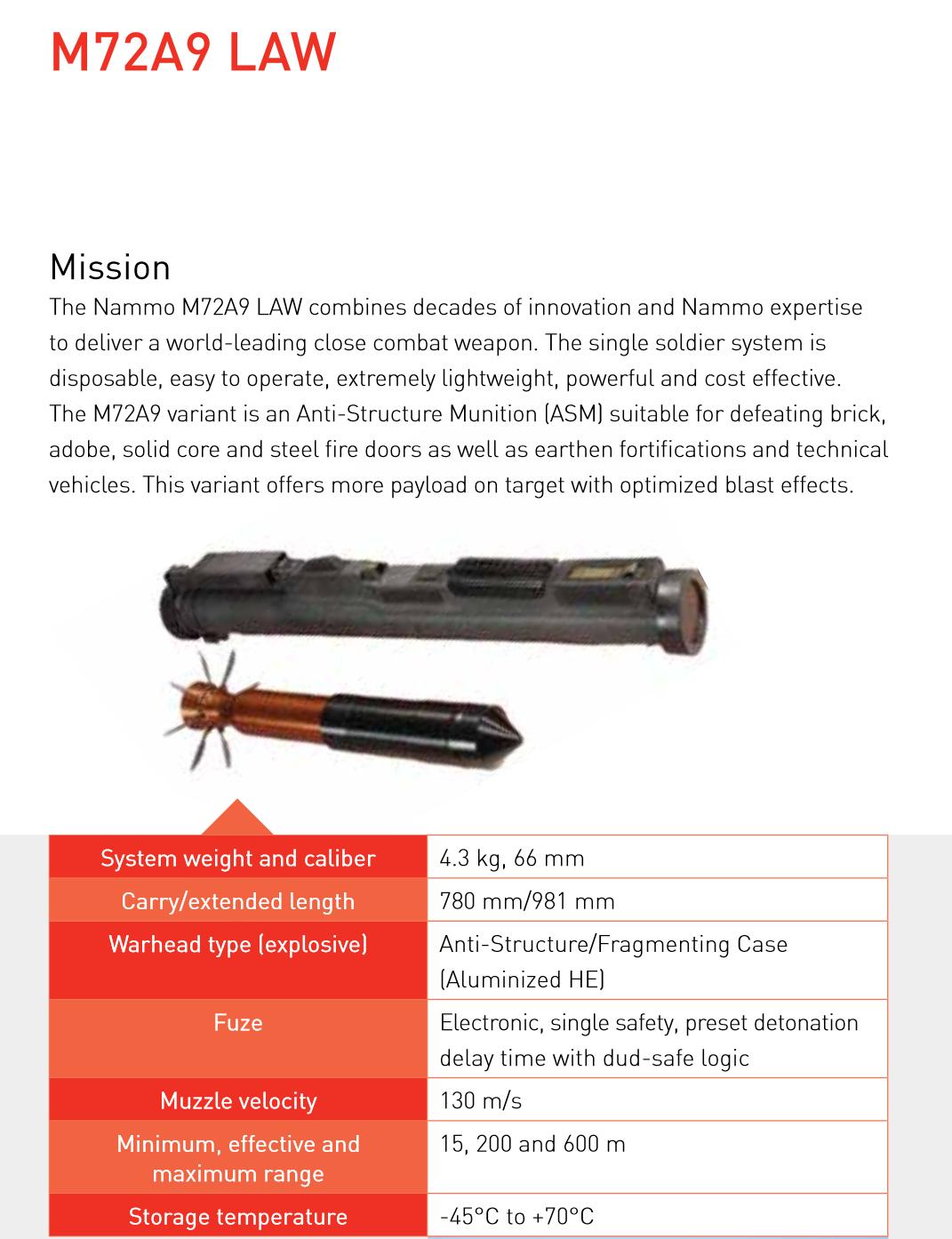 If it turns out that the M72 ASM is comparable in payload to the CG 84mm ASM, I'm going to officially throw Carl under the bus.

Especially as the newest LAW's seem to have the option of a Fire From Enclosure variant for urban warfare, which I haven't seen for the CG.

0
ReplyToggle Dropdown
Msg 122 of 146 to renatohmrenatohm
In reply toRe: msg 119

If it turns out that the M72 ASM is comparable in payload to the CG 84mm ASM, I'm going to officially throw Carl under the bus. Especially as the newest LAW's seem to have the option of a Fire From Enclosure variant for urban warfare, which I haven't seen for the CG.

I wouldn't throw it out just yet, they each seem to have their unique advantages. The M72 has a much shorter minimum range, which may be very useful at fireteam / squad level.  On the other hand, Carl Gustav has a larger warhead (as per renatohm's catch), ostensibly better accuracy than rocket propelled counterparts, and potentially nearly double the effective range depending on the target and ammunition.  The crew also runs it for a living, rather than maybe messing with it once in a career before combat.  If I were lobbing airbursting rounds across a valley in Afghanistan, I think you'd still want the CG. If I was being overrun by NVA armor in Vietnam mere meters away, an M72 may be the ticket.

For those reasons I think it makes sense for something like the CG to be at platoon level, with something lighter and shorter minimum range (like M72 or Bur) in the squad.

1
ReplyToggle Dropdown
Msg 124 of 146 to autogunautogun
In reply toRe: msg 1

Very Informative Information in your forum

A few years ago we had a 200-300 post thread on man portable HE systems. The general consensus on the 3 best bang for the buck western systems were: -Milkor M32 w/ Medium Velocity Airburst Grenades + Fire Control Unit -M72E11 Airburst Law + Fire Control Unit  And then to your point -Imortar lightweight (10lb) 60mm with Fire control unit + SAAB MAPAM

Yes I remember that one, very neat system. The video I saw of it firing was very quiet.

Whats the actual HE/ Frag effect of them? And how are they typically deployed (ie 1 per squad? How many rounds?)

And have you tried experimenting with a FCU like the Multi Ray 800 with them?

Is Eyrx still a thing. Seems like the ideal direct fire support for platoon with a MP or thermobaric warhead.

0
ReplyToggle Dropdown
Msg 128 of 146 to grayliongraylion
In reply toRe: msg 110

I gotta be honest, I'm a little confused by this entire topic and a bunch of the rampant and wild speculation since it's really obvious from the tfb article itself, some recent army presentations, from the solicitation itself, and from the things we know about how the xm25 1.0 saga finally wrapped up last year that clearly point to this program being a program meant for an americanski xm25 to win....

For one, the DOD now owns in-house the xm25 TDP and all the hk IP related to it.

For two, they also own a good majority of the IP that would go into producing the smart optic itself which could very likely just outright be raided from one of four currently running optic programs.

For three, the only other possible contender that might meet the requirements that they've set is a rheinmetal product that may not be done and could very likely "fall afoul" of the same "German export laws" and cause a similar situation to xm25 1.0 again!

The americanski xm25 is going to win since this is a program designed around it winning and that has eliminated the roadblocks from the previous disaster.

An Americanized 25 also fits with the broader strokes of their infantry combat master plan right now.

Finally, it appears as if this solicitation is more about giving people a Better antimateriel rifle much moreso than better HE projection capabilities.

There's other programs and work out there that's focusing on brute HE projection which the majority of things being discussed in this topic fit into much better.

And arguably from my perspective I can see why they'd want this xm25 2.0 better AMR AND other stuff for their HE projection needs.

0
ReplyToggle Dropdown
Msg 129 of 146 to roguetechieroguetechie
In reply toRe: msg 128

I gotta be honest, I'm a little confused by this entire topic and a bunch of the rampant and wild speculation since it's really obvious from...some recent army presentations...