PDF Drive - a wealth of firearms, military, and other books

The Marines have begun a low rate purchase of the 30x113mm RWS for short range air defense and counter drone work: 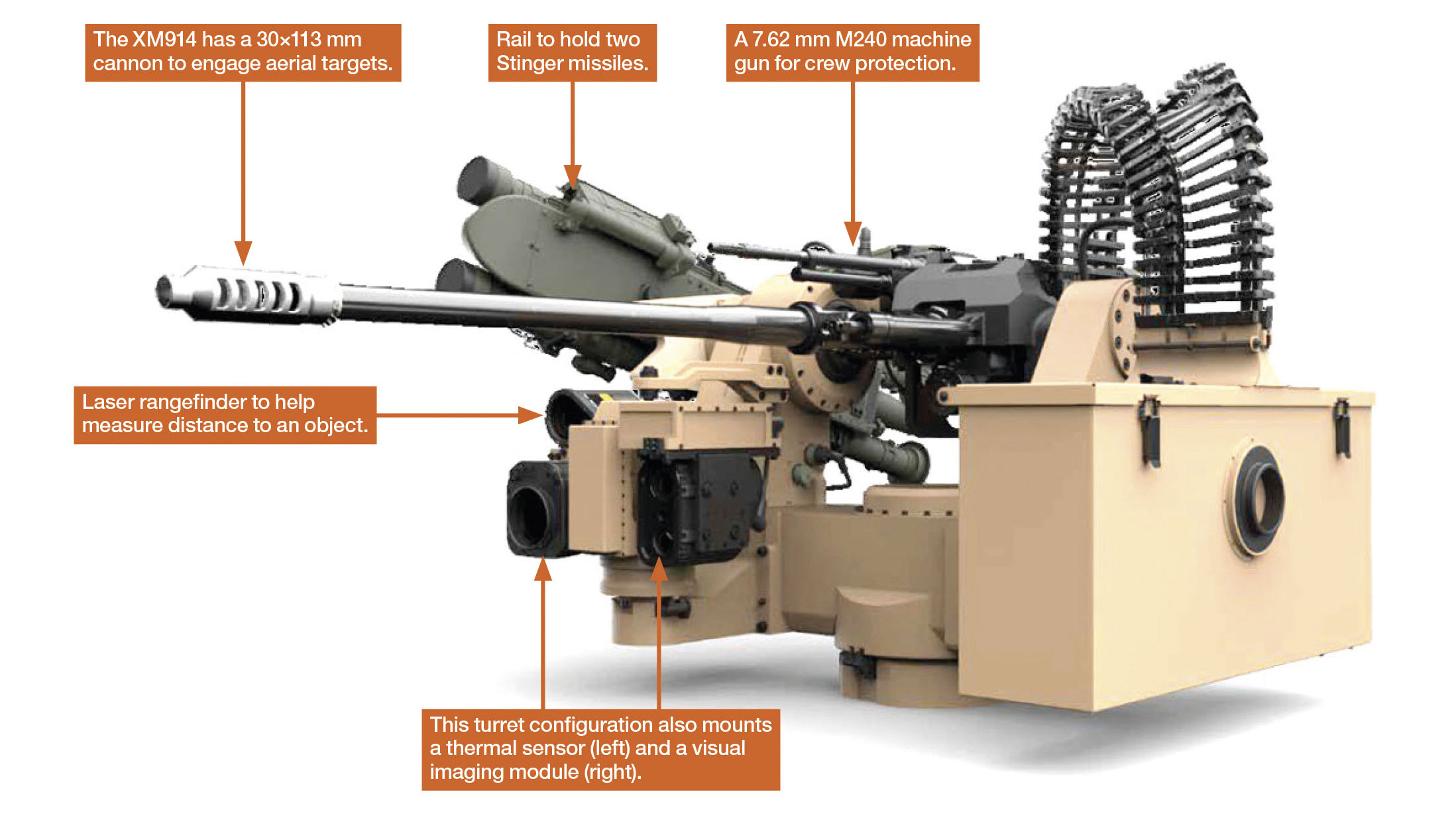 The first 30mm remote weapon system to be qualified on the JLTV platform, the KONGSBERG RS6 RWS for MADIS RWS includes the XM914E1 30mmx113mm DC driven cannon with a co-axial M240 (7.62mm) machine gun, an integration kit for the Stinger Air-To-Air Launcher (ATAL) and provisions for future C-UAS defeat systems.

Whats more interesting for us is we're seeing that the 30mm Proximity Airburst round is entering production. While there are a number of programable fuse autocannon shells (Bofors 3P, Rheinmetal, etc) this is fairly unique in being a proximity fused shell. Perhaps proximity was chose due to the unpredictable flight pattern and speed of drones?

And more info and video:

Overall it looks like we're increasingly close to seeing the 30x113mm M230LF fielded for ground combat, and we're also finally seeing some airbust rounds fielded by the US Military. While this is initially for SHORAD air defense, it's probable we will see these employed more widely as a standard weapons for JLTV's.

1
ReplyToggle Dropdown
Msg 2 of 16 to gatnerdgatnerd
In reply toRe: msg 1

I really would like to understand the rationale behind the proximity fuze. Since the shell is going to be unguided, the only way to hit the drone would be if the drone pass through the path of the cloud of shrapnel, and it could only happen if the firing solution is correct

0
ReplyToggle Dropdown
Msg 3 of 16 to poliorcetespoliorcetes
In reply toRe: msg 2

By this logic, proximity fuzes are never worthwhile.

In reality, proximity fixing expands the acceptable miss distance from essentially zero to probably a couple of feet.  That's a huge improvement in Ph.

0
ReplyToggle Dropdown
Msg 4 of 16 to poliorcetespoliorcetes
In reply toRe: msg 2

I really would like to understand the rationale behind the proximity fuze.

I'm not sure either; afaik this is one of the only modern proximity fuse autocannon shells?

I had thought a base fused, programable air burst like the AHEAD/ STK 40mm would have made more sense, in order to blast a sort of shotgun pattern of pellets forward into the drone.  This also reportedly improves fragment velocity vs a nose mounted fuse as well.

I also wonder how well a Prox fuse could work for ground to ground use, especially in an urban area wheres theres a lot of objects the shell might be in 'proximity' to enroute to the target.

Theres two main explanations I could think of for why they went with Proximity fuse over timed airburst.

1. Northrop wanted a dual purpose shell that would work well in both the M230LF against drones/air targets, as well as work with the M230 from the Apache in the air-to-ground role. Proximity would probably work better for A2G from a flying helicopter, as the 'copters distance to the target might be constantly changing, which would require constant lasing and reprograming of the 30mm shells with each shot. With proximity fuse the Apache could just hose the target, and the prox fuse would take care of the appropriate time to airbust on its own. 2. The erratic acceleration of quadcopters makes it difficult to accurately time the shell, so proximity fuse is more reliable at airbursting near them.

I'm leaning toward answer 1 as the explanation.

0
ReplyToggle Dropdown
Msg 5 of 16 to gatnerdgatnerd
In reply toRe: msg 4

Medium calibre proximity fuzes historically were large relative to the projectile and so turn counting fuzes were smaller and simpler as a solution for airbursting rounds.

Bofors 3P (now BAE https://www.baesystems.com/en/product/fuze-3p-ammunition) prefragmented programmable proximity fuzed has been around since the late 80s and now electronic and mems fuzes have enabled the fitting of proximity fuzes to smaller ammunition. The xm211 fuze fits in the same well as the regular pd fuze meaning there’s no reduction of he fill.

Since this new fuze has different modes that can be selected from the cockpit, it should be quite useful (and certainly would have been in general over the past 20 years). I like that the USMC is starting to incorporate 30x113, and while it's limited to a niche role presently I hope someone in a position of authority has the foresight to consider incorporating it more widely.

Specifically, I'd like to see them revisit upgunning the Cobra.  The current generation Viper is almost twice as heavy as the original Cobra, and heavier than the Apache, it should be able to handle the M230 recoil impulse significantly better than the original. 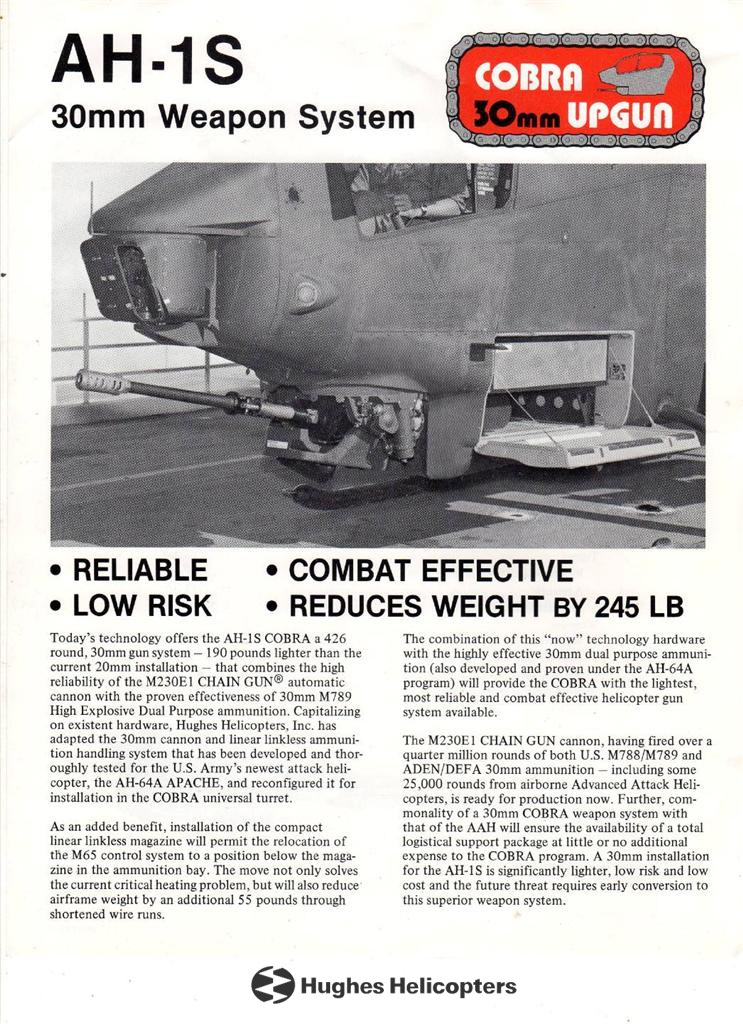 For what it's worth, I'd also really like to see the AAV-7's Cadillac-Gage 1 meter turret replaced fleetwide with a 30x113 RWS and twin Javelin (or better, Spike) launcher.  The biggest consideration here is how the system copes with saltwater exposure, but beyond that it should be a huge step up in capability with low risk as both systems are already matured.

As far as drones go, in place of the 7.62 it should be straightforward to incorporate 2.4/5.8 ghz directional jammer with a yagi antenna which will at minimum be able to sever the control link to the drone (and ideally data / video), these sort of jammers are already available in handheld form presently and can also be supplemented with a general 2.4/5.8 Ghz area jammer, which should address most modern off the shelf consumer drones.  That leaves drones made to deliberately operate off typical frequencies, but there are ways of addressing that too and it narrows down the pool of threats.

Once the control link is jammed, these consumer drones will follow pre-planned contingency procedure upon loss of control link (hover, land, or go home) any one of which should make it an easier target.  The real pain is detection and cueing.   If we have some room to play around with it, search and track can be done actively via MMW radar arrays developed for APS, or passively via wide angle staring IIR sensors (which you might want to incorporate anyway as part of an ATGM missile approach warning system), all of which can be integrated onto the RWS.

1
ReplyToggle Dropdown
Msg 7 of 16 to DavidPawleyDavidPawley
In reply toRe: msg 5

Man, I had completely failed to retain that one of the P's in 3P was for Proximity. So clearly, this new 30x113mm Prox is not the only modern proximity autocannon round.

Now I wonder if we'll see them adapt it to having full 3P capability / allow it to function in timed airburst.

0
ReplyToggle Dropdown
Msg 8 of 16 to RefleksRefleks
In reply toRe: msg 6

As far as drones go, in place of the 7.62 it should be straightforward to incorporate directional jamming with a yagi antenna which will at minimum be able to sever the control link to the drone (and ideally data / video).

This sounds very practical and worthwhile.

Though I admit to fantasizing about them using a MG42/MG3 coax with the 1200rpm bolt to allow for high ROF drone swatting...

In regards to the Cobra, switching from 20mm to 30mm seems like a no brainer if it can be successfully integrated. Much more useful as an anti personnel round, especially with this latest AB rounds. The Apaches were reportedly having poor terminal effects with their 30mm because the rounds would penetrate a bit into the ground prior to detonation, which greatly reduced their fragmentation effect. I imagine the problem would be even worse with the 20mm - same ground penetration but way less HE/Frag.

1
ReplyToggle Dropdown
Msg 9 of 16 to RefleksRefleks
In reply toRe: msg 6

Specifically, I'd like to see them revisit upgunning the Cobra.  The current generation Viper is almost twice as heavy as the original Cobra, and heavier than the Apache, it should be able to handle the M230 recoil impulse significantly better than the original.

So right after you posted this, I came across the Army's work on their new Helicopter systems....where they specifically request a 20mm: 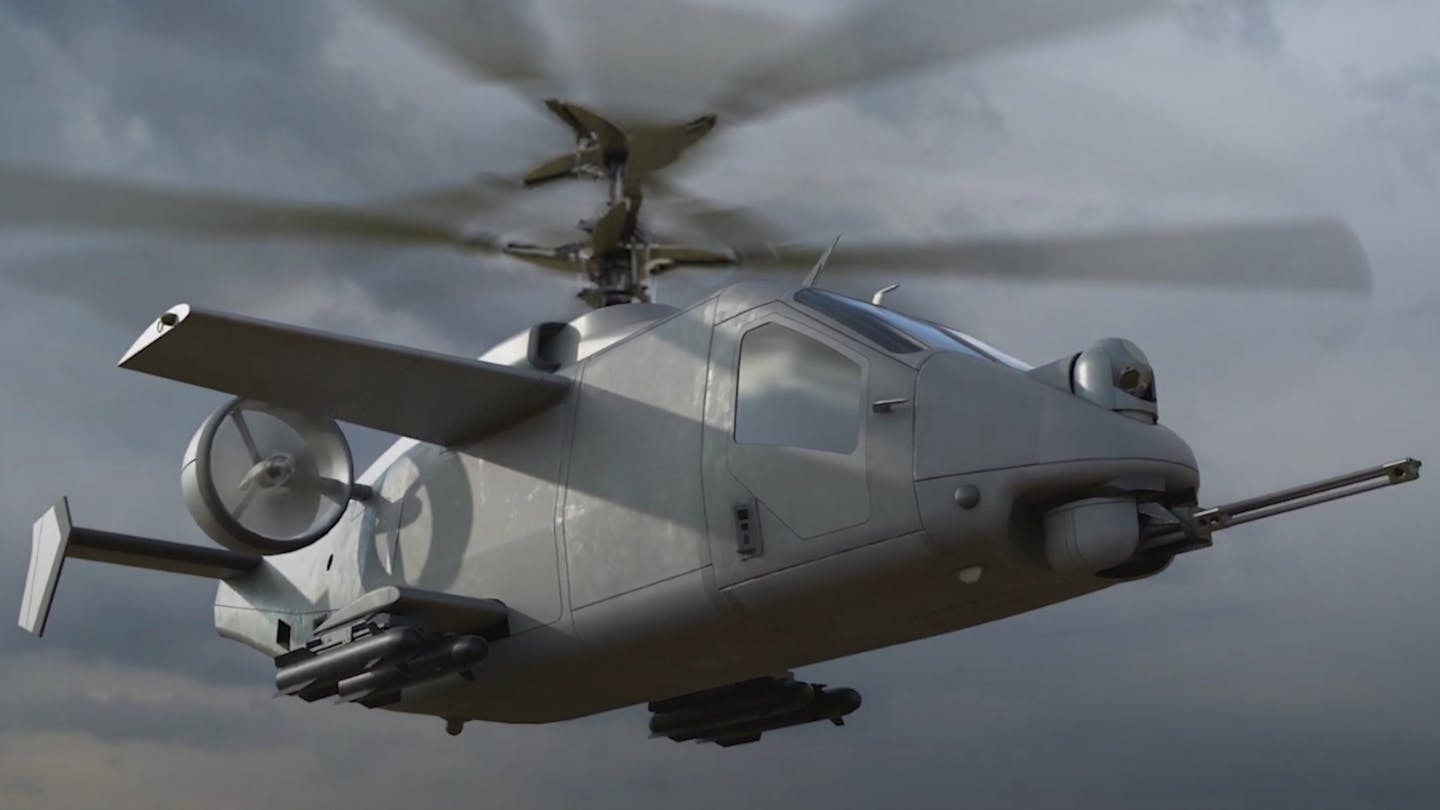 FARA CP will feature a lightweight primary armament system with rapid-fire capability to engage targets of opportunity and provide defensive fires without excessive payload and impulse considerations to the airframe.

Engineers have found that a 20mm Gatling weapon provides sufficient range and lethality while minimizing system weight and forces applied to the FARA airframe.

So much so that Northrop is designing a 20mm lightweight version of the M230LF...oy.

Canole says Northrop was approached by DEVCOM which wanted to evaluate another option than General Dynamics’ XM301 20mm Gatling gun which the Army has indicated will be integrated into the FARA prototypes.

The Sky Viper is an improved version of Northrop’s M230 Bushmaster, a 30 mm single-barrel chain gun carried by the AH-64 Apache. Downsizing to a smaller cannon round and form factor fits with the FARA design concept which emphasizes a lightweight primary armament system with rapid-fire capability to engage targets and provide defensive fires without excessive payload and recoil.

Among the advantages Northrop Grumman claims for Sky Viper is accuracy. The company says it’s more of a precision weapon than the XM301 which it sees as more of an area-suppression weapon.

The reduced recoil of the Sky Viper - which Northrop Grumman says is “ground-up” redesign of the M230 - diminishes airframe fatigue and gimble/mounting structure stress, rendering lighter system weight as a whole.

While emphasizing that Sky Viper is a FARA-focused effort (with DEVCOM funding), Canole acknowledges that Northrop Grumman is looking beyond the platform to where it might offer a solution “with a lot more firepower than a .50 caliber”. That could include the Army’s new Mobile Protected Firepower light tank prototypes for which .50 caliber (12.7mm) auxiliary guns are already spec-ed.

“The low recoil and a relatively lightweight system really opens the door for [applications] where .50 calibers tend to be the mainstay,” Canole says.

Yikes, they're trying hard to spin their airframe constraints requiring a step backwards as a positive