More information about 50x228mm can be learned in detail from the following article, which gives more specific projectile quality data.

But the shocking thing is that when introducing the mass of the projectile in this article, the article claims that the 50mm warhead actually weighs 1540 g. Totally doesn't conform to common sense: We can learn from the Oerlikon Pocketbook (1981 ver.).  Even if it is a much more powerful 50mm "full power" cartridge: 50x355mm 501MK, its projectile mass is only 1.55 kg, and it can be learned from the XM913 launch video that the L/D ratio of the 50x228mm projectile is only about 4. Meanwhile, we can compare easily that the ratio of ogive radius/diameter is almost the same as 25x137mm NATO, amazingly short and fat. How can the projectile be so heavy? Even if there is really existing such a heavy projectile, considering that the muzzle kinetic energy is about 600-650 KJ, it means that the muzzle velocity is likely to be less than 900m/s. Such a slow initial velocity and blunt bullet ogive makes everyone have to wonder whether this projectile can have a more reliable long-range air defense capability of up to 4 kilometers, which troubles me and thinks this data is absolutely untrue. What do you think of this problem?

You can see the article and other messages below. Notice the underlined part in the first pic.

0
ReplyToggle Dropdown
Msg 3 of 25 to AugmentcoreAugmentcore
In reply toRe: msg 1

I may be wrong but the main goal of Super 50 is bigger APFSDS, with bigger HE being a bonus.

As such, they aren't really concerned about HE, but considering the parent 35x228 shell weighs 'only' 550g, the weight ballpark you're mentioning is almost triple that, which means that it will have considerably more payload than the 35mm shell.

Last but not least, shell weight depends both on external and internal geometry, with 'mine shells' being much lighter than 'regular HE shells' because the explosives are far less dense than steel.

0
ReplyToggle Dropdown
Msg 4 of 25 to renatohmrenatohm
In reply toRe: msg 3

I may be wrong but the main goal of Super 50 is bigger APFSDS, with bigger HE being a bonus.

My reading was the opposite; they want the 50 so they can use either Big HE Airburst or use actually Guided 50:

The U.S. Army is testing the Bushmaster 50 mm cannon as a counter rocket, artillery, and mortar (C-RAM) and counter unmanned aerial vehicle (C-UAV) weapon. Initially developed under the Extended Area Protection and Survivability Integrated Demonstration (EAPS ID), it has been successfully tested in tracking distant moving targets using interferometric radar as a sensor, fire control computer, and radio frequency transmitter and receiver to launch a course-correcting projectile. The command guided interceptors have a thruster that receives commands for maneuvering and warhead detonation, with a tantalum-tungsten alloy liner to form forward propelled penetrators to defeat C-RAM targets, and steel body fragments to destroy UAVs.[3][4] The systems can destroy UAVs at a range of 1 km (0.62 mi) and at a height of 1,500 m (4,900 ft).[5]

More info (although still not much)

And this video mentions 'much larger warhead vs 35mm, and thats where the lethality comes from' which to me also speaks to a HE emphasis over AP. 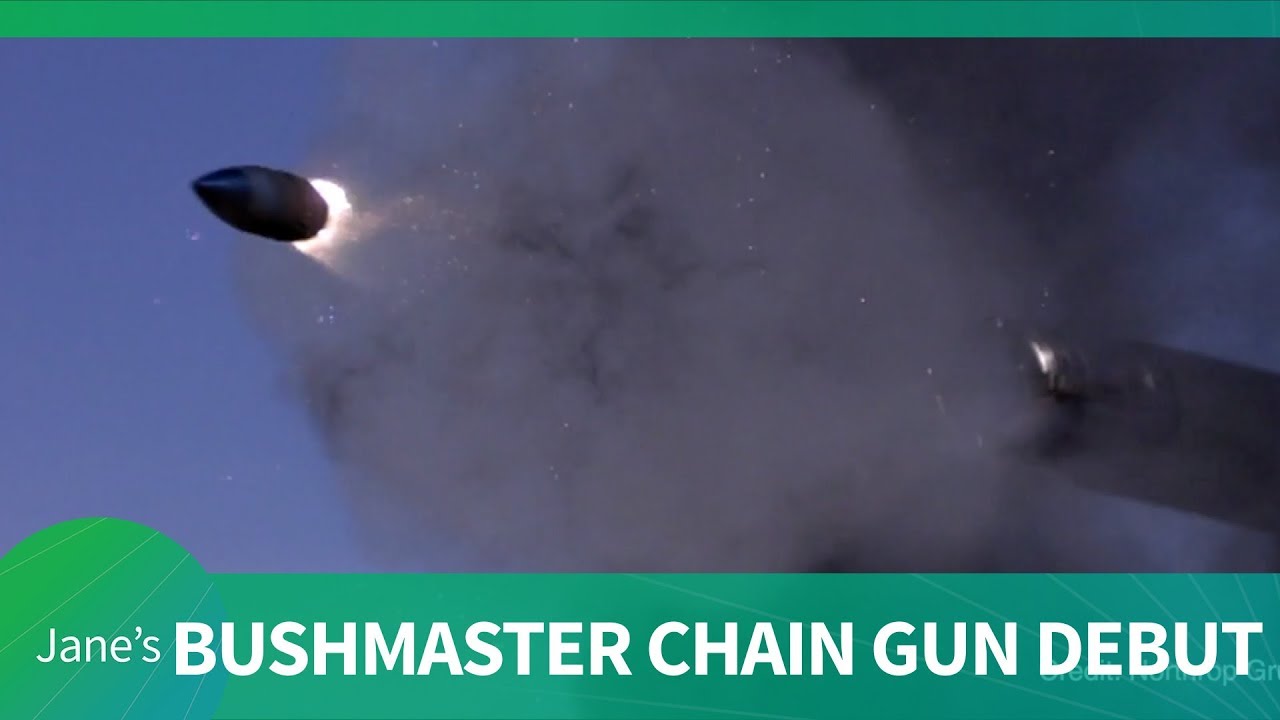 Jarrod Krull, Communications Manager, Northrop Grumman talks to Jane's about the unveiling of the XM913 50mm Bushmaster Chain Gun for the US Army's Next Gene...

0
ReplyToggle Dropdown
Msg 5 of 25 to gatnerdgatnerd
In reply toRe: msg 4

If APFSDS performance was the top priority, then I suspect they would have retained the extended 50 x 330 case of the Rheinmetall Supershot; the puller sabot frees up the maximum volume for propellant behind it. However, the very short nose probably doesn't work too well with a full-calibre HE shell. Rheinmetall did relatively little work on Supershot HE ammo, but seem to have used saboted 35mm shells. There was no doubt about the priority in this instance!

2
ReplyToggle Dropdown
Msg 6 of 25 to autogunautogun
In reply toRe: msg 5

In fact, this is exactly where this issue is controversial. The 35x228mm high-explosive ammunition charge 112 grams of Hexal PW30, while the 50mm charge is only 190 grams. The charge range of the projectile has increased by 69%, but the weight of the projectile has increased by 181%. Using the Gurney formula to calculate will easily draw the conclusion that the fragmentation velocity is much lower than that of 35x228 (1415m/s VS 1076m/s), and is even lower than 30x165mm rounds, which is obviously unexplainable. What is even more suspicious is that it can be clearly seen from the shooting video that the projectile’s L/D ratio is only about 4, which is much shorter than the abandoned Oerlikon 501MK 50x355mm projectile, but the bullet mass is almost the same.
Although it is possible to increase the weight of the projectile shell by increasing the thickness of the shell, such as the 57x347mm SR ammunition for the Soviet S-60 AA (2800g bullet weight and 154g A-IX-II charge), this is obviously outdated, even Soviet itself had abandoned this idea while designing 30x165mm cartridges for Shipnov 2A42/2A72, and for this reason, it is even more incredible to increase the bullet weight and reduce the muzzle velocity to about 900m/s. A higher initial velocity can significantly shorten the flight time of the projectile and increase the hit rate. As we all know, for projectiles that need to take into account air defense purposes, a higher initial velocity is more important than a heavier projectile when the shape of the warhead is consistent. So my question is here: there are obviously better and been proven by Oerlikon designs: low mass and high muzzle velocity, why do we have to "turn around" to use a worse design?

1
ReplyToggle Dropdown
Msg 7 of 25 to AugmentcoreAugmentcore
In reply toRe: msg 6

I have seen no details of the construction of the 50mm HE, but I would expect it to be optimised for airburst. For maximum effectiveness, such a shell might well carry a substantial load of tungsten pellets lining the shell wall, with the HE in the middle. That could put up its weight quite a lot.

Consider the two approaches to fragmentation: a conventional HE/frag like the Bofors with 3P fuzing, which can be set to detonate at a certain point when the target is within the effective radius, and the Oerlikon AHEAD which  carries only a small HE load to burst open the shell; the 35mm AHEAD shell weighs 750g, not 550g. The designers will presumably have been trying out different combinations of HE and fragments (size and number) in order to achieve the most effective all-round compromise for a range of targets.

0
ReplyToggle Dropdown
Msg 8 of 25 to autogunautogun
In reply toRe: msg 7

The 40mm "3P" projectile basically maintains a little heavier weight than the 40mm HE, but Bofors increased the propellant charge to increase the initial velocity from 1005m/s to 1025m/s rather than reduce the muzzle velocity to about 970-980m/s. Although the 35mm AHEAD projectile is heavier, reaching 750 grams, the initial velocity still maintains a high muzzle speed of 1050m/s and make its muzzle energy increase from 380KJ to about 410KJ, which also means that the long-distance trajectory will not be bad. In fact, for modern AA guns, if you want to achieve better killing effects on highly maneuverable targets (such as SDB bombs, anti-radiation missiles, JDAM, small armor-reinforced militarical drones and even MV-22 "Osprey" in full-speed mode), then its muzzle velocity should not be less than 1000m/s. A typical example is PLA newly equipped "625" 6-barrel 25x183mm Gatling SPAAG, which completely eliminated the previous GAU-8-based "LUDUN-2000" 7-barrel 30x165mm Gatling gun in small caliber SPAAG use . One main reason is that the ballistic of the 25x183B is "far better" than that of the 30x165mm projectile, although its muzzle kinetic energy is lower. Therefore, in my opinion, an ideal choice is to reduce the mass of the 50mm projectile to about 1200g, so that the initial velocity can be increased to at least 1030-1050m/s instead of the original only about 900m/s, long-distance trajectory and flight time It can also be guaranteed, which is conducive to increasing the probability of hitting.
However, it is interesting that although China has also introduced the Oerlikon 35mm GDF-003 anti-aircraft gun together with AHEAD, the Chinese-improved AHEAD projectile has a unique feature: the original 152 fragments of Oerlikon have been reduced to 133 (the original 8 layers and 19 per layer are reduced to 7 layers and keep 19 pieces per layer the same), and more Hexal PW30 is added to the vacant layer, which is said to further increase the kinetic energy of a single fragment to have stronger penetration than Oerlikon original version.

0
ReplyToggle Dropdown
Msg 9 of 25 to AugmentcoreAugmentcore
In reply toRe: msg 8

In terms of performance against walls and typical cover, are autocannon better with HE or sabots?

Would an antimaterial rifle with tungsten flechette have much use against reaching insurgents behind cover?

The answer is: neither of them will work. Ordinary HE projectiles hardly have the function of prolonged detonation due to the limitation of the fuze. This also leads to the poor penetration efficiency of ordinary HE projectiles on thickened concrete walls that are common in modern urban warfare. Take the 30x165mm 3UOF8 HE as an example, given that the A-670M warhead detonating fuze equipped with it does not have the postponement function (PD-FUZE), it doesn't even have the ability to penetrate the 300mm thick reinforced concrete wall during the test on 2A72. Sounds ridiculous, right? But it does exist. The penetration force of APDS or APFSDS for buildings however is too strong. In many cases, modern urban warfare can even be accurate to the control for a certain toilet-sized room. In this case, the additional penetration power is very likely to cause huge damage to the comrades separated by the wall while killing the established target.So according to the discussion above, adopting APDS/APFSDS to defeat non-armor target in urban warfare is certainly not safe enough.