Stumbled across this new shell being developed for the M1 Abrams by Northrop. Its essentially a Bofors 3p type of prefragmented programable shell but with a base fuse, designed for firing from 120mm tank guns. It also follows the trend we're seeing across all of the Armys guns lately to adopt airburst technology (now being seen in 30x113, 40x53, and now 120mm) 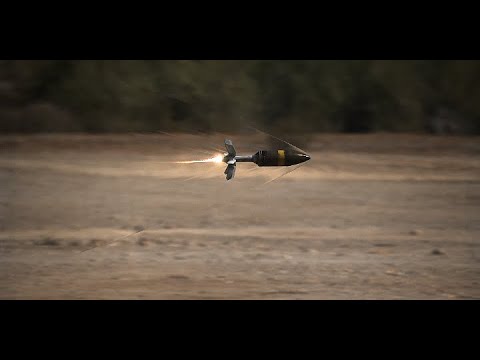 Northrop Grumman is delivering advanced tank ammunition to the U.S. Army. The M1147 Advanced Multi-Purpose round (AMP) is increasing survivability and stando...

More technical discussion of why this is handy:

But the gist is this will allow the Army to consolidate on 2x Tank Rounds as standard, and replace 4x rounds that were previously carried. Going forward tanks will just carry APFDS 'silver bullet' for killing tanks and heavy IFV's, and then this new AMP for everything else (anti personel, anti structure, light and medium vehicles, breaching walls, possibly even slow helicopters/drones.)

0
ReplyToggle Dropdown
Msg 2 of 10 to gatnerdgatnerd
In reply toRe: msg 1

More programmable airburst is always a good thing, I'd quite like to see the Carl Gustav M4 w/84mm Laser guided shells (along with programmable airburst functions) pushed down to the squad level, enabled by leveraging the potential weight savings of CT, this would probably be more effective than the new 6.8 NGSW (Although it is a really fantastic MG round)

Its funny you mention the CG Airburst, as I also stumbled across this the other day, but didnt think it warranted a new thread:

The HE 448 shell...will replace the current HE 441D/441D RS round, keeping the same functionalities, its multi-role fuse being settable in impact mode, to destroy soft-skinned vehicles and other semi-hardened targets, or in airburst mode, allowing neutralisation of infantry in the open or in open trenches. The electronic fuse is automatically set when the round is loaded into the tube, the fire control system providing the time should the AB mode be selected.

Compared to the HE 441, the HE 448 will have a different high explosive warhead; instead of the 800 steel balls with a 6 mm diameter, the new round warhead will have a much greater number of smaller balls, 4,200 with a 3 mm diameter, and these will be made of tungsten, providing an increased lethal range. Not only, the new round can reach a greater distance; the current HE 441 D can be employed against targets up to 1,200 meters, while the new HE 448 will reach 1,500 meters, a 25% increase.

So thats a really pretty nasty upgrade - going from 800 bb's to 4200 dramatically improves hit probability / penetrations m2 when used in airburst. The use of tungsten pre-fragments and selectable burst is also reminiscent of the Bofors 3p and this latest 120mm AMP projectile.

In terms of leveraging NGSW, I think the 6.8 weapons and ammo make bringing the CG down to the squad level difficult. The Squads are already overloaded with the M4 + Armor they carry now, and the 6.8 loadout will be heavier still.

However, as you mention the 6.8, while questionable as a rifle round, is a pretty bitchin machine gun round. So perhaps having 1-2x 6.8 LMG's at the squad level will allow the Platoons 'weapons squad' to abandon their traditional M240's and instead use that weight budget toward deploying 84mm Carl Gustaf's and other HE assets.

0
ReplyToggle Dropdown
Msg 4 of 10 to gatnerdgatnerd
In reply toRe: msg 3

Gatnerd, sorry for the confusion, but I meant leveraging CTA/TV ammo in another caliber(.224 Vulcan/6MM CAKE potentially) to substantially reduce weight and increase performance while also allowing a weight budget for squad level force multipliers, part of why I'm not so hot on the current implementation of NGSW is that it's so heavy that it precludes the increased fielding of precision airburst explosives on the squad level, which I think is a sub optimal trade off, last time I checked a Laser guided airburst 84mm Shell will do better at defeating peer infantry armor than a tungsten cored 6.8.

And I like your point about the weapons squad weight savings enabling a Carl Gustav team, I've had a similar idea myself wrt salvaging something out of NGSW

Edit : Here's an example of the potential we're giving up by making the 6.8 NGSW a squad level cartridge, I'm pretty damn sure the enemy would rather be on the receiving end of 6.8 than they would 4              airbursting Carl Gustav shells, along with the laser guided shells being able to unironically overmatch harassing PKM gunners better than 6.8 NGSW (although giving every squad 2 GPMG's that out            perform the M240 while weighing less than the SAW is still attractive)
https://www.youtube.com/watch?v=Gdx8tsbVZsg

Maybe you haven't considered ROEs, not only European  but also American. Being trigger-happy with Big Airburst Ammunition is not quite compatible with strict ROE. Cinetic personal ammunition is one of the best possible options under contemporary ROEs.

No debate here: a big 84mm airburst pellet is going to be more effective against personal armor. But in different circumstances such system will not be permitted

Programmable fuzing is amazing and awesome stuff and I tend to agree that things like ngsw put us in a position to waste it by preemptively stealing away the weight budget to push various HE solutions down to platoon level in useful quantities.

With the way warfare appears to be evolving, getting HE to our people In usable useful and plentiful forms does seem to be where we need to be putting more of our efforts.

Its kinda too bad that there was a dispute on the contract award for the 8x8 gear schlepper UGV we almost got to buy a few thousand of. You could have carried a lot of boom on those.

0
ReplyToggle Dropdown
Msg 7 of 10 to poliorcetespoliorcetes
In reply toRe: msg 5

Lol. You Europeans aren't priming yourselves to ram yourself face first into china's fist like we are so you can afford to keep those play nice ROE's.

I say this jokingly but in all reality I'm not kidding.

The chicoms are going to require all the HE we can get down to even the squad level due to the lessons they've been taking from Syria and elsewhere.

And while the pentagon etc can't come out and say it I can, it's only a matter of time until we exchange blows with them.

Viewed from that reference frame, the ROE thing is pretty minor compared to figuring out how to deal with the entire stable of drones and other nastiness they've been accruing.

1
ReplyToggle Dropdown
Msg 8 of 10 to roguetechieroguetechie
In reply toRe: msg 7

AMP round recently tested. Also kind of ridiculous to hear that this has taken 10-15yrs to develop, as the Bofors 3P has been around since ~2002, and this is basically a 120mm shell with a 3P type fuse...

The intent is to replace four 120mm rounds currently in use: the M830A1 Multi-Purpose Anti-Tank (MPAT), the M830 High Explosive Anti-Tank (HEAT), the M1028 canister (CAN) round, and the M908 obstacle reducing (OR) round. During testing, the crews fired 86 service rounds, testing the AMP’s capabilities under multiple scenarios and against various intended targets.

"Being able to see the effects that this round was able to have downrange, engaging a multitude of targets, bunkers, walls, troop targets, armored vehicles, it's a very functional round; instead of having five different rounds, it brings it down to two," Hall said.

Currently, the U.S. Army utilizes five 120mm service rounds, each with a unique purpose and intended target. The M830 HEAT and M830A1 MPAT rounds are primarily designed for light armor targets and, in the case of the MPAT, aerial targets. The M1028 CAN round is intended to engage troop targets over the max effective range of the mounted machine guns, and the OR is designed for obstacle reduction. The AMP encompasses all four of these rounds, with additional capabilities such as breaching reinforced walls. For tank crews, this versatility serves a vital purpose in addressing the ‘Battle-Carry Dilemma’ and giving two invaluable resources: time and space.

“What this round has done is it’s going to make tactical planning in an operational environment a lot easier. The term that we use is ‘Battle-Carry,’ what round we have in the breach when we enter combat, usually that’s going to be decided by what we expect the enemy to be throwing at us if we’re expecting tanks, we’re going to battle carry SABOT, our tank defeating round,” Smearman explained. “[The AMP] allows us to battle-carry that round without fear of running into a different enemy.”