It sound like "mission creep" occurred fairly early in the project.  I started out as "replace the 9mm parabellum."  Before long, there was a desire for a weapon that would be effective against a certain level of body armor AND have an effective range of 200m.

1
ReplyToggle Dropdown
Msg 12 of 36 to roguetechieroguetechie
In reply toRe: msg 10

I had lusted after one of their Glock Conversions for years, but it never came to pass.

Their controlled fracturing bullet seemed like a great design if it worked and could be made in Civilian legal copper/zinc: 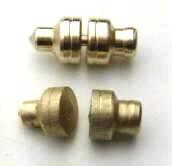 Probably the 80/20 solution to 7.92 would be .30 Luger +P+, as Barsto now makes Glock barrels in .30 Luger. Then just find a ballistics nerd with a lathe to turn out some of those CF2 bullets.

0
ReplyToggle Dropdown
Msg 13 of 36 to gatnerdgatnerd
In reply toRe: msg 12

I am a nerd with a lathe. I need to do some things before im anywhere near good enough to make projectiles though.

(Probably going have to be two.)

The idea is to get them running in 9x19 with printed Glock mags then 22 tcm and then open the mags up to double stack double feed or double stack 1.66 feed depending on how it goes. Additionally because of the geometry of the concept I personally see as the most valuable monkeying with presentation angle will probably be a large part of this.

I'm hoping to eventually get the various bits working to a degree where experimenting with something like a 7mm penna or 7.92 vbr is actually possible.

3
ReplyToggle Dropdown
Msg 14 of 36 to roguetechieroguetechie
In reply toRe: msg 13

I had thought the cheek pistol concept silly at first, but his video with the TP9 was very compelling, and as a TP9 owner I'll probably have to snag one of those tall sight mounts to try it out.

Are you planning on scratch producing your own cheek pistol concept? If so thats really cool.

0
ReplyToggle Dropdown
Msg 15 of 36 to roguetechieroguetechie
In reply toRe: msg 13

I read that and thought, "WTF is a cheek pistol?!"

A fascinating concept.  I wish I could try it myself.

I hope that we'll see reports on your CP project?

0
ReplyToggle Dropdown
Msg 16 of 36 to gatnerdgatnerd
In reply toRe: msg 14

And yes I'll report here on my efforts, I have decided on two general concepts to work off of.

The one I think will Ultimately work best is going to be a riff on this with a bunch of FGC9 DNA Thrown in at least for the initial version.

Concept 1 will be loosely based on this.

Concept 1 is going to take heavy cues from the almara MPA, using 3d printed Glock mags and essentially Mac/Uzi guts. The 3d printed mags are important for several reasons as first I need to get essentially a Glock mag Mac running, then work to alter the design to double stack double feed. Then it's onto making it run and feed 22 tcm.

Being utterly blunt here, a lot of why this step is happening is to build confidence and give me something to play around with before I start on the serious concept.

The idea behind basing v1 on the almara though is mostly about ease of getting parts I can alter and as a testbed there's lots of information out there for.

I'll be working out non reciprocating charging and a "razorback" for mounting the optic on.

I'll then put together grips that attempt to replicate the pp-2000 grip angle (which appears to actually have a 3-5 degree forward cant) with the mag going in as seen in the pp2000 pictures which may mean feed lip and follower alterations to get a presentation angle I can work with.

Once I'm confident I have this part worked out I'll start essentially building an americanski pp2k with some alterations to make it work safely as a cheek pistol. This is why I put up the pictures of the earlier guns with the "push button" cocking arrangement, because you need to be able to wrap your support hand directly over where the production pp2k bolt carrier reciprocates.

The reason I picked the pp2k early version as sorta the ideal cheek pistol layout has to do with the several degree off vertical forward cant which should in theory make the cheek pistol shooting stance work better from an ergonomic and biomechanics standpoint.

I have a new dual extruder 3d printer coming that's compatible with petg and some higher end filaments out of the box along with mill and Lathe and what I need to bend flats plus enough access to mig arc and other welders to do the miscellaneous stuff I'll need to do.

It's not going to be a fast process between time money and the need to build some tools to make the end products along the way but it should be fun and rewarding.

Depending on how it goes you never know I could feel adventurous enough to eventually have my reloader buddy help me wildcat a 7mm Penna and or 7.92 vbr version once I get true double stack double feed printed 22 tcm versions working.

The "cheek pistol" concept and just small "machine pistols" (minus the FA of course) is the first gun thing I've found exciting, and within reach, in a few years now.

The thing you shouldn't expect is for this to turn into anything commercial beyond me maybe making some of the parts that aren't off the shelf for other builders.

This is purely something I'm doing because it has caught my interests, I find it exciting, and I'm wanting to learn and explore concepts that there just isn't any commercially available guns or other parts available to use in the process.

0
ReplyToggle Dropdown
Msg 17 of 36 to stancriststancrist
In reply toRe: msg 15

You'll definitely see reports Stan and I agree that it's kinda just all around a fun concept...

I don't know how much, if at all, you follow the gun 3d printing stuff but it has went from 0-60 faster than most people thought was possible. Let me introduce you to the FGC-9 if you haven't seen it yet.

This is the FGC-9 in all it's Glory and in many ways these are what really pushed me to starting my project. There are people making these fully from scratch right down to making the springs themselves and using 3d printed bath tub ECM rifling equipment to do the barrels.

As you can kinda see in the parts layout picture, the fgc-9 is more or less a pp-2000 with the bolt flipped the other direction.

It made me realize that rather than lamenting that nothing commercially available ticks all the boxes to make a good cheek pistol, I should just make my own damn cheek pistol that fits what I think would be best!

I had a really rough 5 year period that cost me my health and the majority of my tools etc and in some ways killed my enthusiasm for actually making things, but the cheek pistol concept came along and I realized that I could probably actually build something worthwhile if I just put a couple grand into tools and got to work.

And that's exactly what I'm doing. It's going to force me to make my own tools to make the gun which Ultimately benefits me too!

In the post above this I outlined my initial approach to gatnerd but you all can rest assured that I have a whole laundry list full of interesting gun ideas I've dug up over the years which will likely make appearances in various iterations of the two basic guns. I'll be documenting what I do and how I do it as this project gets rolling, and I'll definitely make sure you guys can follow along.

3
ReplyToggle Dropdown
Msg 18 of 36 to roguetechieroguetechie
In reply toRe: msg 17

"Have I ever told you you're my hero".

1
ReplyToggle Dropdown
Msg 19 of 36 to roguetechieroguetechie
In reply toRe: msg 16

At one point you realize Styer TMP is just about the smallest form factor you can get , and rigid side folder bunch better support than flimsy telescoping stock ,

While conventinal SBR like SIG Rattler are pushing close to  Mp7 size, the pistol like holsterable gun is preferable way to carry , but at 2kg MP7 ist a bit heavy for what is is. Folks have built full sized ultra light AR15s under that weight 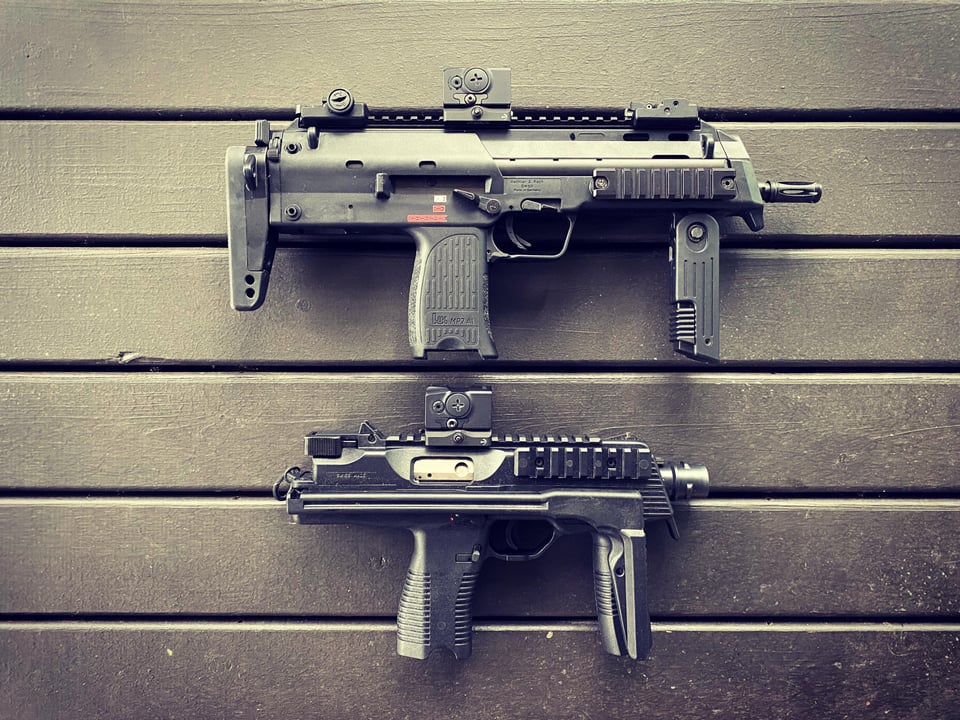 1
ReplyToggle Dropdown
Msg 20 of 36 to FarmplinkerFarmplinker
In reply toRe: msg 18

They do indeed. Amusingly, their MAC barrels are all made on the same exact barrel tooling as their competition winning Precision Rifles. The result is these little Ghetto Blasters are shockingly accurate. I've got the MPA 5.7 MAC, its a 1" @ 25yd gun.