The lack of glorious BRRRRRTTT was sad.

Nice video of how a small quadcopter is armed with a baby munition: 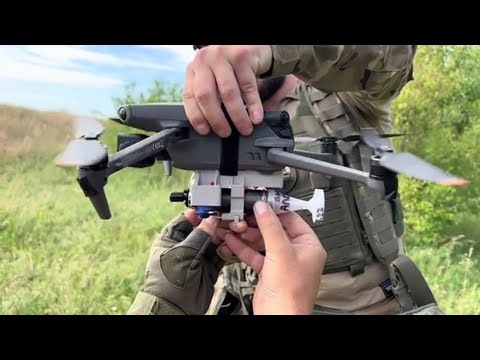 In a rather interesting sort of behind the scenes video a group of Ukrainian soldiers shows how they arm common commercial drones.Usally videos about this on...

Supposedly Brimstone missiles, but camera is potato quality so could be anything.

Superb article on the importance of Starlink satellites for Ukraines war effort; they arguably may be the single most important piece of equipment sent.

How long before Elon has to demonstrate that a Starlink bird is an effective kinetic kill vehicle?

1
ReplyToggle Dropdown
Msg 831 of 1476 to FarmplinkerFarmplinker
In reply toRe: msg 830

I wonder if they are? my understanding is most of Starlink is in low earth orbit, well below where most enemy satellites would be hanging out

Asides from enormous casualties 200KIA per day (add cca 4 WIA per KIA ) , extended and interrupted Ukrainian logistics are now the weak link.  Stocks of old surplus are draining up even abroad.

Ukraine has now almost completely run out of ammunition for the Soviet-era weapons systems that were the mainstay of its arsenal, and the Eastern European countries that maintained the same systems have run out of surplus supplies to donate, Danylyuk said. Ukraine urgently needs to shift to longer-range and more sophisticated Western systems, but those have only recently been committed, and in insufficient quantities to match Russia’s immense firepower, he said.

Russia is firing as many as 50,000 artillery rounds a day into Ukrainian positions, and the Ukrainians can only hit back with around 5,000 to 6,000 rounds a day, he said. The United States has committed to deliver 220,000 rounds of ammunition — enough to match Russian firepower for around four days.

To match Russia's 50,000 rounds per day, with each round weighing 50 kilograms, some 2,500 metric tons of ammunition would have to be moved per day from Ukraine's western border to the east. After reaching some railhead in the east they would have to be loaded on some 350 trucks to be distributed while being under fire from long ranging Russian weapons. This would have to happen each and every day.

For the first time since the war began, there is now concern over desertion. The report, seen by The Independent, says the worsening situation in the Donbas, with up to a hundred soldiers being killed a day, is having “a seriously demoralizing effect on Ukrainian forces as well as a very real material effect; cases of desertion are growing every week”.''
Morale can not replace firepower. Morale gets destroyed when soldiers come under concentrated artillery fire.

Not really.
You have to keep in mind the extrely different situations in the West, NATO, Europe and in Russia. Russia still sits on the vast stockpiles the Soviets collected over the decades of the Cold War. Now they use it. These stockpile where for a full out war against NATO. With oders of magnitude more consumption per day. So of course these will last very long for a small scale (by comparison) war. The Russians simply have the equipment. They still can compensate for the losses.
In the West everything is gone. Quite literally. Storage costs money. So the stockpiles where rationalised and given up. You propably can't immagine how bleak the situation in Germany currently is.
The idea in the last decades has been that the most likely conflicts would be so limited the minimum on hand storage is enough and new stuff can be ordered and delivered if really needed. Which seemed rather unlikely because no third world nation would be able to put up serious resistance to a force from western allies. No military operation of wetern forces in the last decades included more than 100 days of high intensity fighting.
Now we see a drawn out HIC and supprise, supprise all the non existent preperation is insufficient. At the same time we are close to a breakdown of the globalised supply chains which causes extreme complications for reacting quickly. Covid still is a problem as well.

For the first time since the war began, there is now concern over desertion

That sounds strange to me. Where would the deserters go? To Russia? Certainly not. If they simply go home they will get caught. So what are the options.
If by desertion they mean unsanctioned retreat or routing this is technically something different.