But to answer your question, the overall commander of a combined arms force should make it clear to the infantry battalion and company commanders that their units will bypass the enemy as required and keep up with the tanks.

Certainly. But since when does anything in combat (or a training excercise) work as planned.

It occurs to me that may be why the Army created Armored Brigade Combat Teams, with tank and infantry companies in the same battalion.

Personally I think that mixed combined arms batallions for a manoeuver force are a good idea. In practice the battalions of a brigade would be mixed and matched anyways to create combined arms battlegroups. Why not make this a permanent thing.
In the past the German Army also had such mixed batallions but these have been dissolved after the End of the Cold War.

As far as I can tell one source of the problem could be how the training is organised. From the information I have it seems that the IFV crews and dismounts are trained in different schools. Not inside their partent unit. It also seems like cross training is limited. This is different with in the German Army in general. With the Panzergrenadiers every one got the same basic training. They also all get basic training on the vehicle an its opperation. After that the main function for the near future of a soldier is determined. Usually by ability and talent. There can be and usually are changes over time. This is why in several of the videos that have been posted here the soldiers say things like: "currently i am assigned the function of gunner". It seems that this lower level integration is one of the keys.

The Polish Borsuk sure looks handsome , i imagine much of the shape is dictated by amphibious requrement . Here side by side with Bradely , i always taought Borsuk is a small IFV but it looks like Bradley sized, probably its small only in comparison to KF41 and  AS-21

Boxy bow to add floatation  volume to the front end. 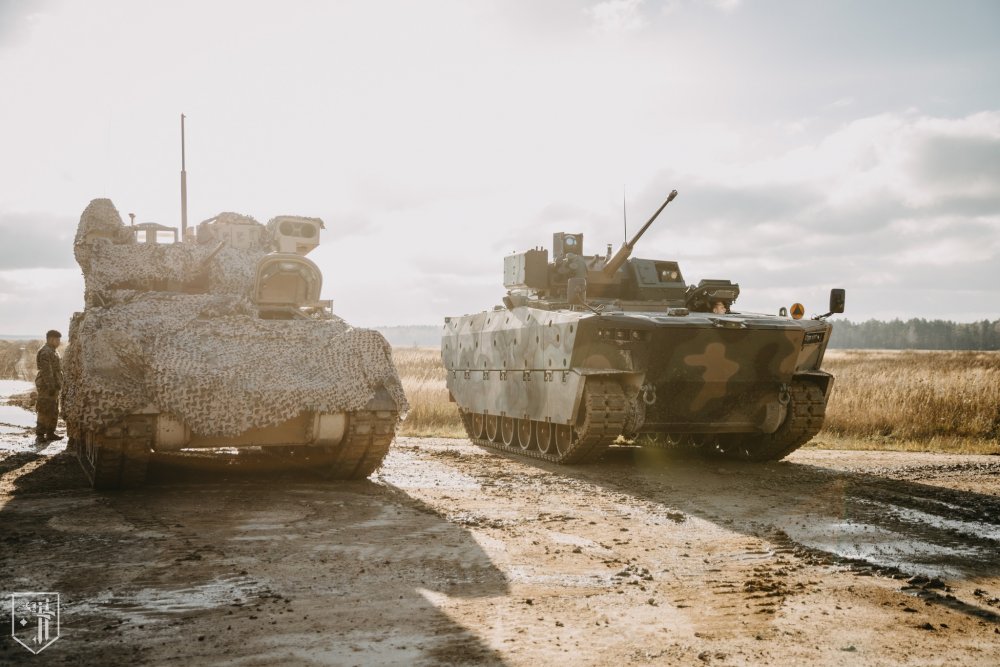 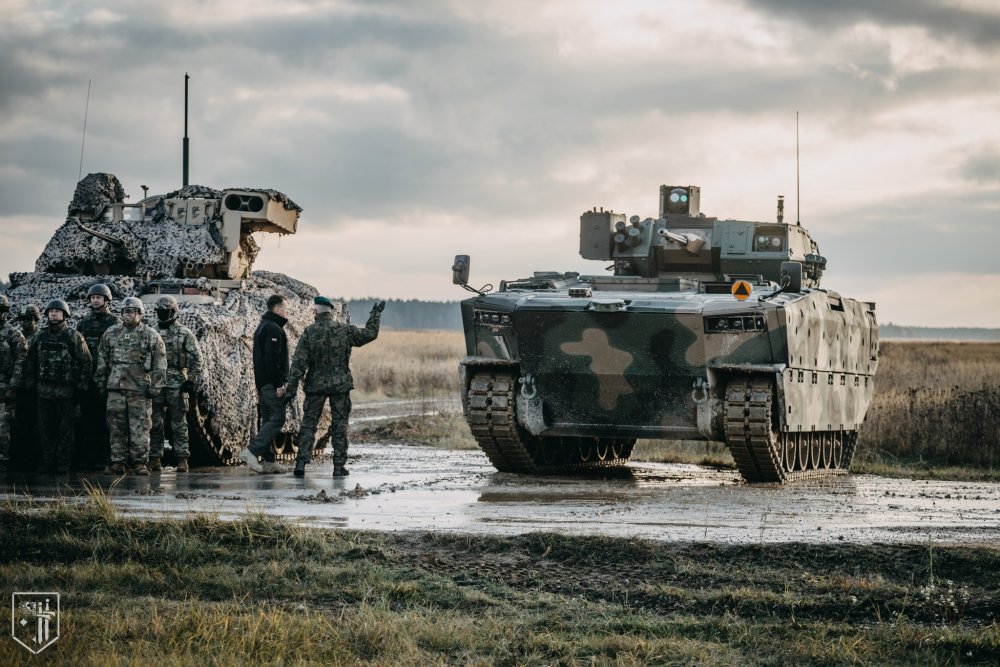 Kinda surprising Japan chose Patria AMV XP over its domestic rival.  Whatever one might think about AMV it has shown itself as most sucesfull export 8x8 , i wonder how much japanese tech will end up in the AM XP , while they manufacture them in Japan.

The Japan Ministry of Defense has announced today that Patria AMVXP 8x8 has been selected for the Japan Ground Self-Defense Force as their next Wheeled Armored Personnel Carrier 8x8 vehicle under the WAPC programme. The selection includes manufacturing licence of the vehicles in Japan, with a solid contribution to the local economy and technology development securing the supply and service in Japan. The Patria AMVXP 8x8 vehicles will be replacing the Type-96 8x8 Armored Personnel Carrier vehicles which are currently in service by Japan Ground Self-Defense Force.

“The selection of Patria AMVXP 8x8 and our proven licensing model is great proof of Patria’s capability to deliver the latest technology and to enable local security of supply. Patria AMVXP 8x8 has successfully proven its superior performance, as well as its mobility and protection, in various crisis management missions, and Japan will be the ninth user country of Patria’s AMV vehicle family. Patria has industry-leading experience of licensing and cooperation with local industries in many countries, and we are committed to this in Japan as well. The Japan Ground Self-Defense Force will receive state-of-the-art and high performance Japanese manufactured AMVXP 8x8 vehicles to support critical operations for decades to come”, says Janne Räkköläinen, Senior Vice President of Market Area World at Patria.
...[Message truncated]
View Full Message
1
ReplyToggle Dropdown
Msg 207 of 213
In reply toRe: msg 206

With the USMC switching to 15 man squads, is there anything wheeled out there that can carry that with bench seats?  How about that and shock mitigating seats? Or is the only option more vehicles in a platoon

UAEs Patria is stretched to include a BMP turret while maintaining the same number of dismounts as a non stretched version, I wonder if you ditch the turret for extra seats and swap to a non penetrating rws if it will hold a whole squad 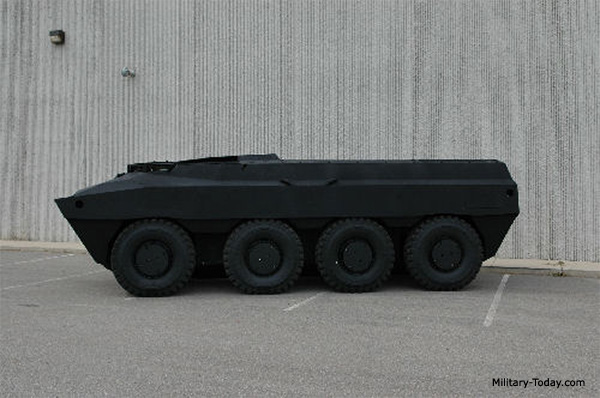 Did not know about those, thank you

13 seats max though? How are they doing this?

Just going to leave this here...

0
ReplyToggle Dropdown
Msg 212 of 213 to schnuersischnuersi
In reply toRe: msg 211

So what it the purpose of Tracked 'Boxer' where does it fit , who is meant to buy it and what is it offering over Lynx or Puma? I imagine the module interchangability is about the extent of comunality with Boxer 8x8 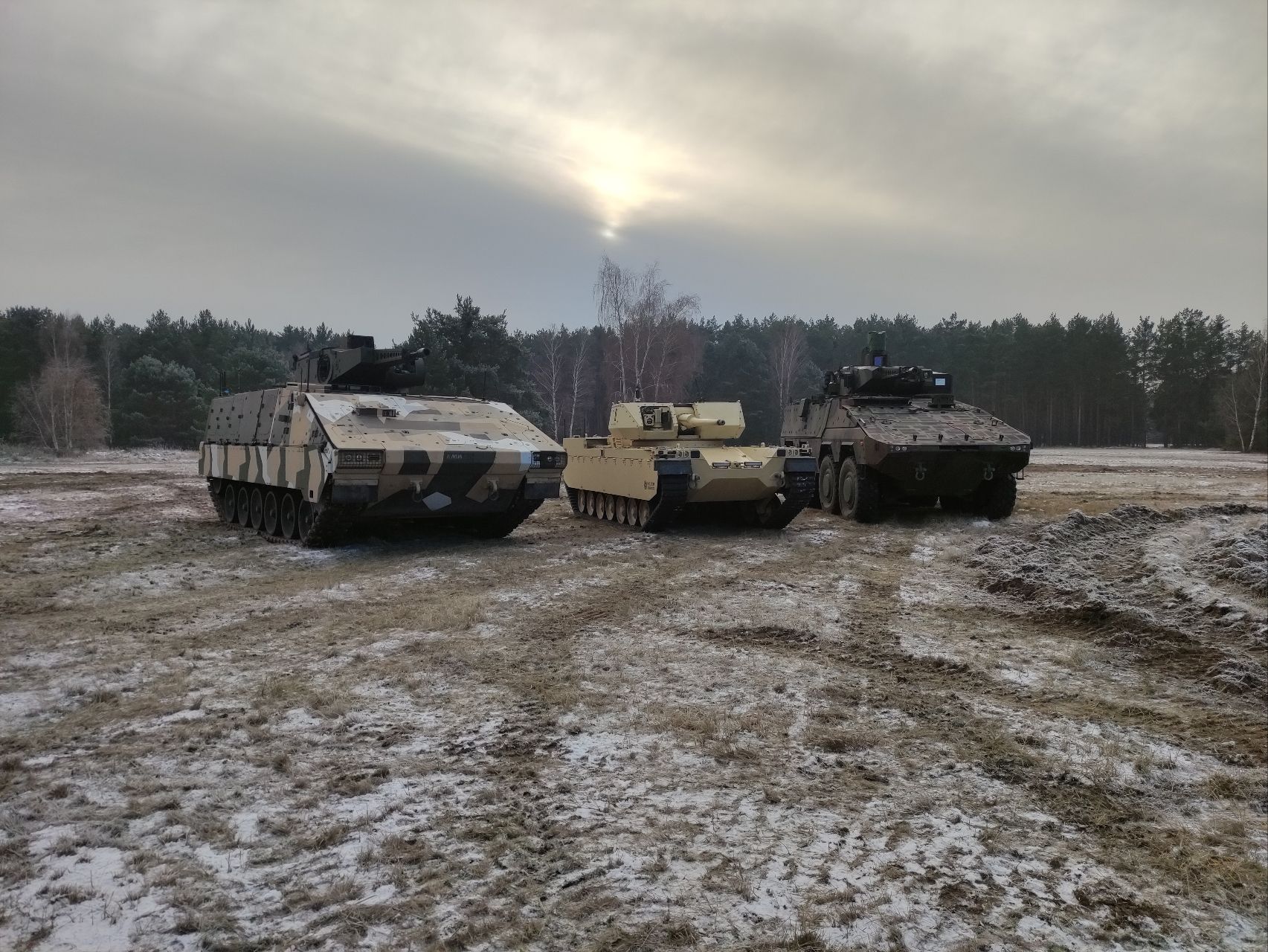 So what it the purpose of Tracked 'Boxer' where does it fit , who is meant to buy it and what is it offering over Lynx or Puma? I imagine the module interchangability is about the extent of comunality with Boxer 8x8

The Boxer Tracked is not in the same category s the Puma or Lynx. Its not an IFV but an APC/equipment carrier.
The idea is to have a tracked chassis that can use the same modules as Boxer but offers the advantages of a tracked suspension.
The comonality is pretty far reaching. The engine is the same as well. Interiour equipment and parts are the same. Even most armor panels are. The differnce parts are really only what is dictated by the drivetrain.
I think the idea of a tracked Boxer is pretty good. The wheeled one is limited in its cross country mobility and thus problematic to use with tracked combat elements. This way the same functions can be performed with the same equipment but adapted mobility. Minimum training required and different types of equipment modules and the two drivetrains need to pass inspection and testing only once. Which is a massive siplification for procurement procedures.
We will have to wait and see if the concept finds any buyers. Currently its a industry project aimed at the nations who allready use Boxer or intended to do so.