But a 500 gram AC58 can-optimally-penetrate 3-5x what the-optimal-point blank capabilities of an autocannon can.

Yes, theoretically. But this number tells you nothing of how effective it is at doing damage behind armor or knocking targets out.

Cannons are not immune to issues of angle and range.

So are rifle grenades or really any missile.

I'm just saying something like an AC58 enables each soldier to at least threaten an aweful lot of things.

But it doesn't. Even against light armored targets because of the very thin and low mass jet unless the jet hits somthing really vulnurable and importatent the effect will be zero even if armor is penetrated. If the target is equiped with a spall liner chances are the effect behind armor really is zero.

I didn't even imagine this point would be controversial

Its not. Everybody knows they are ineffective. This is why almost nobody uses them anymore.

there was this thing a while back called the panzerfaust and HEATs have gotten a lot better since.

Yes sure BUT they also got a lot heavier. Even back in the day the PG7 warhead for the RPG 7 weights more than 2 kg. Which is more than four times the weigt of a typical AT rifle grenade. The PG7 warhead is hideously outdated and generally concidered ineffective against anything but lightly protected targets.
The Panzerfaust 3 warhead that is effective in UA weights more than 4 kg. Its a completly different league. Much more explosive, much higher liner mass, much more complex design.
Even back in the day simple light HEAT warheads have been known to be notoriously unreliable in behind armor effect. That was befor spall liners and composit armor becaume widespread and quasi standard.

The raw penetration numbers people often focus on are basically useless. Because its only half of what a warhead needs to do. Drilling the hole is step one. Step two is destroying what is behind. This is where simple HEAT warheads fail.

Since I'm on a tangent. How much effect does a 40 MM HEDP have after penetrating cover? Say a cinder block wall, a couple of sand bags or car door?

A typical car door is basically the ideal case for a 40 mm HEDP. It will easily penetrate, even with fragments and the jet will endager anyone standing in the extension of the trajectory.
On the other hand sand bags are the worst case. They will absorb the blast, fragments and are notoriously problematic to penetrate with HEAT. A double row of sandbags has good chances of swallowing a greande. Parts of the jet might penetrate but its power is low and it will only endanger unprotected personell directly in its path for a couple of cm. Maybe one meter.
Cinder block walls are in between. It depends a lot on the exact type of cinder and constuction method used. Massive cinders made from burned clay are pretty tough and will offer significant protectecion. Especially in a double or more row. The hollow ones made from pressed material are less resillient and depending of how many rows and if they are filled with concrete will not even stop all fragments.

Regardless the HEAT effect of a 40 mm HEDP is really low. Its penetration is good on paper but the behind armor effect is really bad.

Why does the U.S. TEND to use HEDP to the exclusion of HE in its 40 MM grenades?

For standardisation reasons. It makes logistics much simpler. The HEDP also is mostly used for the AGLs. Where it makes some sense. 40 mm HEDP can penetrate the typical armor of a Soviet designed legacy AFV except for MBTs. While the effect of a single hit is low an AGL would engage with bursts or sustained fire and can compensate by saturation. This gives a 40 mm AGL comparable capabilities to a .50 cal.
This is the original idea at least.
Ever realised that allmost no AGL is equiped with dual feed?
Issuing them to infantry men to use in their GLs follows the same idea. It means the grenadier only carries one type of ammo. Which is at least somewhat effective all the time against all types of targets. It simplifies logistics and training.
There are a lot of weapon systems and munitions that are designed that way. One prominent example used to be the 120 mm tank gun. Only two types of ammo APFSDS and multi prupose which is a HEAT-MP type. Less then optimal anti soft target effect and fragmentation was accepted for armor penetration to make the shell effective against light and medium armor.

0
ReplyToggle Dropdown
Msg 118 of 233 to grayliongraylion
In reply toRe: msg 106

Same situation as the 40mm duo - big bro is too powerful for individual weapons.

Thinking again on this, maybe a Neopup derivative firing the bigger 25mm could be a good choice.

0
ReplyToggle Dropdown
Msg 119 of 233 to renatohmrenatohm
In reply toRe: msg 118

Thinking again on this, maybe a Neopup derivative firing the bigger 25mm could be a good choice.

It could even use a 30 mm grenade.
The Neopup IMHO suffers from the fact that they wanted high MV for long range and penetration. The Neopup launches the 20x42 at higher speeds than a 40x53 is typically fired. The recoil impulse is massive. In the region of typical for rifle grenades. The recoil mechanism compensates for this so we can assume this level of impulse is acceptable for such a weapon.
The 110 g 20 mm grenade is launched at ~300 m/s. Which results in a recoil impulse in the area of 30 Ns. So a 300 g grenade launched at 100 m/s would be possible for such a weapon.
It comes down to what trajectory and what payload is required.

0
ReplyToggle Dropdown
Msg 120 of 233 to schnuersischnuersi
In reply toRe: msg 116

Its not. Everybody knows they are ineffective. This is why almost nobody uses them anymore.

Given the fact that most western armies stopped using RGs, only to replace them with the 40 x 46 mm HEDP which is even less effective, I don't think that "RGs lack of effectiveness" was a real criteria.

I don't think that "RGs lack of effectiveness" was a real criteria.

Agreed.
But the other way round: if they were effective they might have not been replaced. Especially not by something even less effective in the AT role.
The idea of using grenade launchers as AT weapons was abandoned.

0
ReplyToggle Dropdown
Msg 122 of 233 to schnuersischnuersi
In reply toRe: msg 121

But the other way round: if they were effective they might have not been replaced. Especially not by something even less effective in the AT role.

Clearly, at the time RGs were dropped, they were considered ineffective against tanks.

But at this same time, the 40 x 46 mm HEDP was considered effective against all other light vehicles (or at least sufficient), and THAT is no longer the case...

I am easily confused.  Is the more pertinent argument that 40mm LV grenades have too little HE so the better option would be rifle grenades with their higher payloads?

Rifle grenades are much more limited in terms off effective range and dealing with armor and bunkers has been relegated to LAW like launchers instead of riflegrenades.

I think the issue with Rifle Grenades is one of accuracy. How accurate are they, and how many RG's will a rifleman ever fire to be able to get combat accurate with one?

In the initial (I'd argue, wiser) use of the 40x46, the US had a dedicated Grenadier, armed with a M79, and thats what he did. His job was accurate grenade delivery, and both his practice and combat employment was largely focused on building and improving that skill set.

Given the huge trajectory, low velocity, and shitty sights, these weapons require a serious amount of 'zen' feel for the weapon and range to be used accurately, which is possible with practice.

I was talking to a Vietnam marine awhile back, and he describes their grenadier being in the zone, and just blowing a VC sniper out of a distant tree on his first shot. Meanwhile he tried firing the M79 later and couldnt hit the broadside of a barn because he didnt have that 'zen' feel for the trajectory. 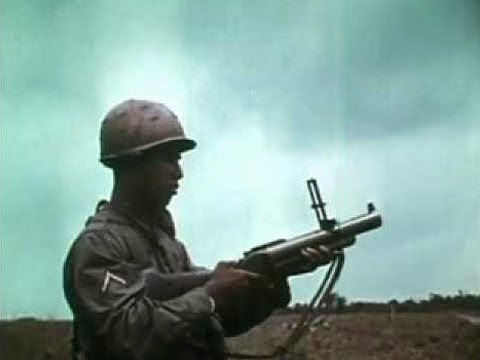 Without extensive practice via dedicated grenadier (or a sophisticated smart scope) I suspect most of these low velocity weapons, whether they be RG's or 40mms, will have similarly poor accuracy to this guy in Iraq, whose dropping rounds right into the street in front of him, missing an entire building sized target thats just across the street in the middle of the day. 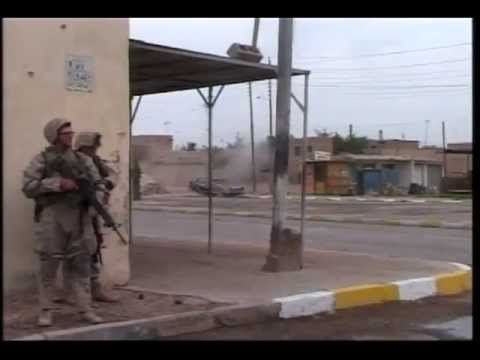 Vootage of Marines firing M-203 grenade launchers from a building corner at a car across the street. Scenes include Marines entering the city and clearing ea...