A very important thing to note is that TV can absolutely ratchet the pressures up if necessary AND they're getting enough of an efficiency bump in a cartridge this size to potentially get a little more MV out of any given peak pressure.

These are both fairly significant factors in making TV case technology one of the safer bets.

They also have their case manufacturing technology streamlined enough to make scaling production doable in a short interval.

I'm not super sold on the Lonestar/GD rifle but everything else they have is damn tempting.

On the note of TV pushing the pressures up, the legacy 240's we have (and the Barrett LWS I'm not so sure on mk48/240L) already have bolts and carriers theoretically safe to damn near 100k psi.

With the wider economic and political situation the way it is, I'd almost be inclined to tell sig and TV to suck it up, take the best of both programs (IF we can physically make enough Delta p cans!), and dump a moderate amount of money turning legacy 240's etc into 6.8 slingers while also doing a pure fleet back end swap to 5.56 and 7.62 neckless in the legacy fleet for anything that really can't do the high pressures.

This buys us breathing room, time to spool up, and hopefully results in people not blowing up guns by trying to chamber hot shit in stuff it doesn't belong in.

If you really want to go full bonus points, make a new standard lightweight link pattern for all the conversion guns to eke out just a bit more weight savings and possibly some long term cost savings too.

There's a few different ways you could do this in stages to make the workload on depots armorers etc more manageable.

Another thing I'd probably look at doing is a new optic or two that aren't quite ngsw fc level complexity but do run digital reticle projection and a ballistic comp onboard or an easy interface to swap the reticles depending on the exact ammo being used.

Interesting that it shows 50-rd capacity for the automatic rifle.  First time I've seen that anywhere. 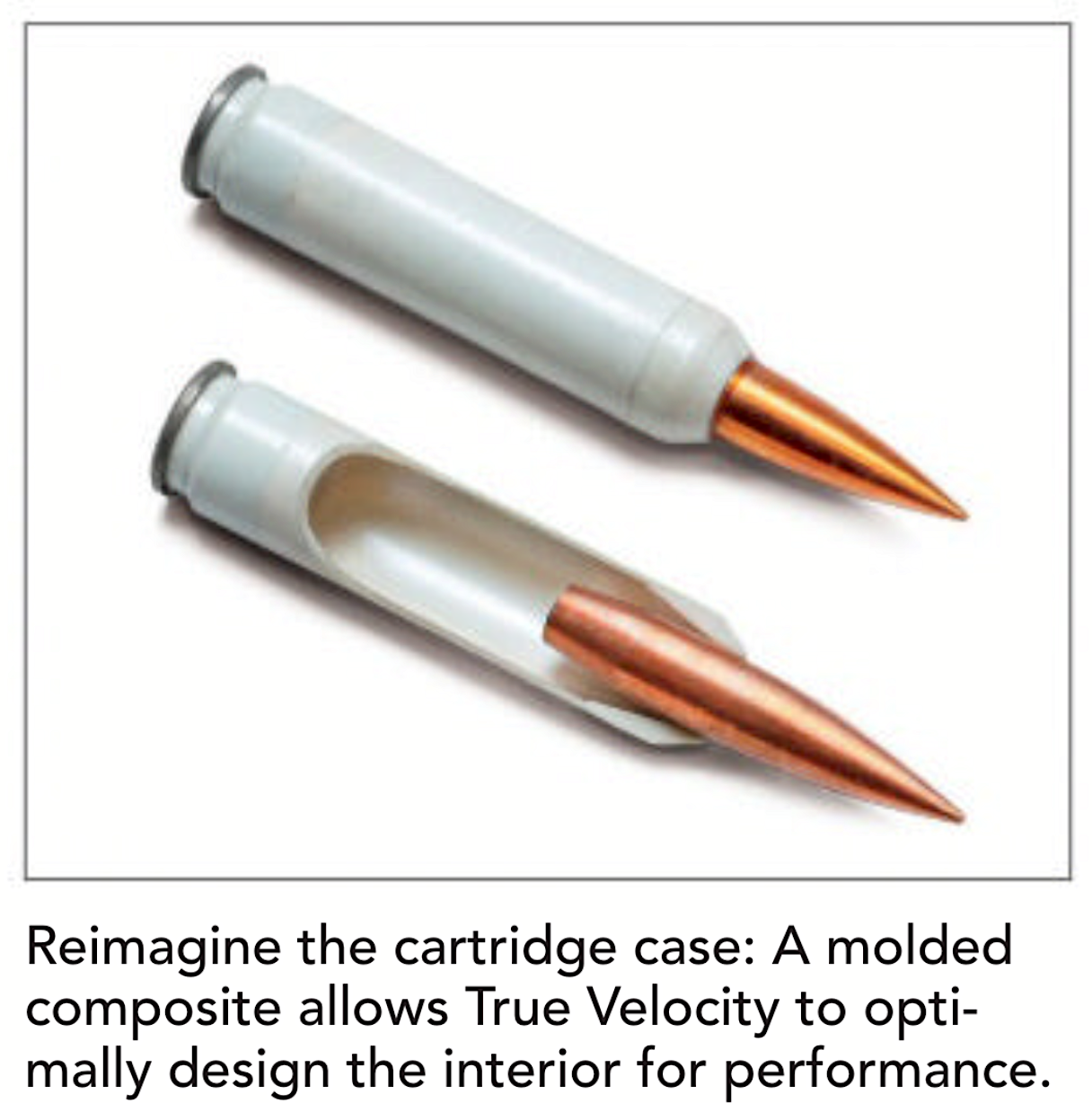 This also gives us an idea of how Emeric's 5.56 Neckless might look in polymer using that Balle D projectile he developed.

I dont have the issue but its available from the same source I got this months digital G&A. Hopefully someone will snag it, as its apparently a '14 minute read' aka pretty indepth article on SIGs NGSW.

Previously Soldier Systems had reported the weights for both: 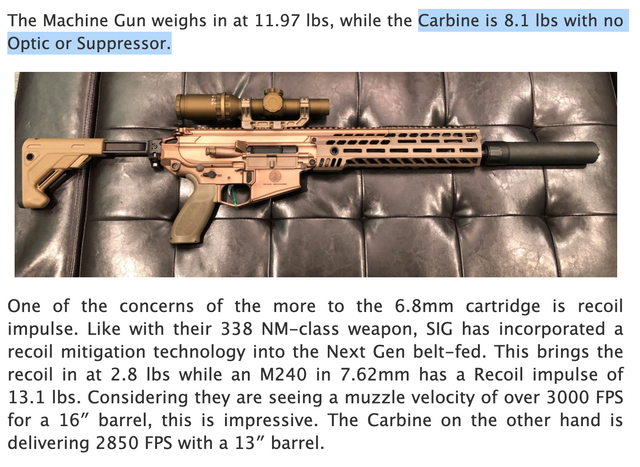 Yeah, It's already hitting 135gr @ 3000 FPS with 65KPSI, Imagine what it could do with the full 80KPSI out of a 22" Barrel, for applications like this the extra barrel length from a bullpup can be a huge boon, not so much with 5.56 IMO

For comparison the 6.5CT Carbine is 8.3 lb (According to Textron), however we have no concrete numbers yet on the Textron NGSW-R

That is just weirdly heavy. I imagine part of that is still being a prototype, plus having the extra complexity of the open bolt / close bolt firing ability. But still. Heavy.

The slight wildcard in the analysis is the suppressor. I assumed the Titanium Brevis was used. However if it was Iconel one, which is 6oz, that would put the RM277 at 10lbs flat. Which is still heavy but would be less.

Some notes from the article now that I've re-read it:

-Rifle ~1moa in testing; a few flyers outside of MOA due to meh trigger

-Can be fired in open and closed bolt configuration

The ammo difference between Civilian and Military is a bit weird. They make it clear that the .Gov NGSW round isn't 80kpsi, as that would prevent backwards compatibility. Yet they mention twice that the .Gov round is hotter then the 65kpsi commercial version, and also uses a different powder and internal case dimension.

So best guess is the TV .Gov load is somewhere between 66kpsi and 79kpsi, with the velocity of the GP EPR projectile over 3000fps.

I've just had some information "straight" from GD, and it's true that they experienced accuracy problems in some cases.

Due to the case geometry, they had to use a cold hammered barrel with a cut chamber (instead of a barrel with the chamber made during the hammering process). With this kind of process, the chamber is not always concentric with the bore, but with conventional ammo that's generally not a huge problem.

Unfortunately, with a plastic case (which is less rigid than a brass case) and a very short internal neck (as seen on the G&A picture) feeding from an automatic weapon, the problem is more acute.

Then add in the equation a bullet with a CoG not located in the best place, a weapon with a thin barrel and a suppressor, a recoil mitigation system that is inducing a lot of barrel vibrations, and this explains why GD experienced (in some cases) bullet in-bore balloting and large bullet yaw at launch, and also why G&A could achieve very good accuracy from a test barrel, or from a converted bolt action rifle.

My understanding is that the "out of alignment" chamber is much more acute with the Textron CT moving chamber design.