The Quickload comment was about the fact that he was using the online Powley calculator for literally years, it still gives pressure in CUP for fucks sake, and yes Balle D, 7n6 and 6mm Unified are all excellent producible designs, Don't think I'm someone who thinks we're stuck with potato 1.1FF .30Cal bullets forever, because I'm not one of those people

But likening actual military bullets to solid copper lathe turned flatline bullets is just not very smart, those are literally gucci target bullets, not at all suitable for mass production or even military use,

And your comment about what makes them unmanufacturable should be obvious, if it was possible to turn out sub 0.7FF Military bullets in large quantities it would already have been done but there really is no excuse for not matching Balle D's form factor in the 21st century

However that's not what Nathaniel ever suggests, he's basically chasing a high at this point, where his earlier designs and concepts were very sensible and grounded, take .224 + .243 Vulcan for example, and then went completely off the deep end with Von Karman Ogive bullets (that have never been made outside of a lab) and 100KPSI TV Cases (and FYI there's no evidence TV can even handle that),

And we haven't even gotten into his gun "designs" yet, although the word concepts would be more accurate, I personally would not want to stand anywhere near Bearcat with a 100KSPI during a test fire without an EOD suit on myself.

Edit 1 : To better illustrate what I mean about "chasing the high"

You can clearly see a trend here, with the designs starting reasonable and grounded, and then trending into fantasy

What is the estimated Form Factor for the 6.8 GP EPR that has been shown?

That provides a pretty solid baseline for what we know (rather then hope) is possible with EPR manufacture. Its certainly a step up from that M80A1... 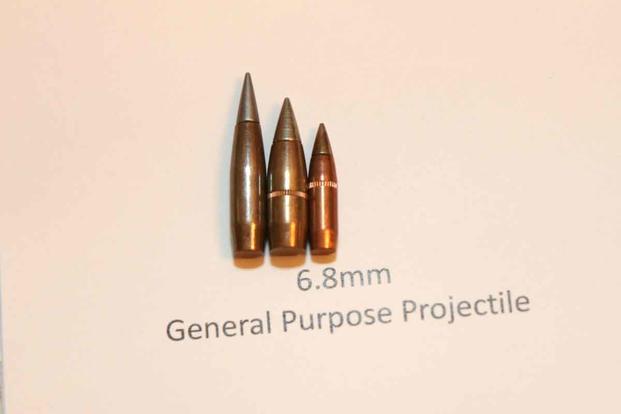 I imagine it's that the base is a hardened(ish) sturdy steel alloy for handling high pressure vs the malleable steel used to form like a 7.62x39 case.

Such an alloy / hardness probably cannot be 'drawn' like brass/mild steel and has to be machined or MIM'd, necessitating the multi piece construction.

That actually raises a very interesting question for both SIG and TV's cases. Namely, are their Steel Bases MIM'd or do they have to be machined on a swiss lathe (like a copper solid target bullet.)

If the bases are MIM, then affordable mass production is possible. If the bases have to be machined then cost is going to be high. The rough grey finish of the TV bases look suggestive of MIM to me, whereas the more shiny steel of SIG's base looks machined. But I have a pretty limited manufacturing experience - sending my sketches out to contract manufacturers is about the extent of my hands on experience with metal work.

What is the estimated Form Factor for the 6.8 GP EPR that has been shown?

Here is my estimate of the XM1186 bullet:

Wonderful, thank you for doing that analysis. 0.87 is a very nice form factor, especially for mass production.

Now, do you think, given the copper and steel of the GP, that it would be 135gr? Or more like 125gr as another member here estimated (somewhere) in the last few pages of this thread?

Thanks a lot. Crystal clear.

I wonder if the pressure requisite is motivated by an objective of saving tungsten as much as possible (or even entirelly) against body armor... but such arrow-shield competition is quite bias against the bullet, at least for now.

But then I can't understand the rejection of the beretta solution for a rifle (for MG is an entirelly different matter). I mean, the more barrel lenght, the better for Eo and Eo is what it is being looked for.

Anyways, if you are right I just don't understand why SiG have any possibilities. IF CT problems can be enough mitigated, then weight and costs savings would obliterate that machined steel plus brass complex case

But then I can't understand the rejection of the beretta solution for a rifle (for MG is an entirelly different matter). I mean, the more barrel lenght, the better for Eo and Eo is what it is being looked for.

I am a hugeeee bullpup guy. The majority of my personal rifle collection are bullpups. Really into them both personally and as a concept.

But from that G&A article on the RM277, I came away less enthused by the design, at least in its state of development that it was reviewed by G&A.

At 10-10.4lbs, its 2lbs heavier then a) the other NGSW rifles b) a good deal heavier then current commercial 7.62 bullpups. When we also factor in the likely 2lb NGSW-FC, plus the heavish ammo, plus whatever battery pack its going to use... reducing rifle weight is going to be at a premium.

The controls (open vs closed bolt option, unusual safety, odd sliding bolt release) also did not look as intuitive as I'd like. Controls wise both the AUG/F2000 and now X95/Tavor 7 / DT MDX all looked much more intuitive and easy to pick up.

So while I do think Bullpup is the way to go for maximum AP ability, I can see why this particular bullpup is struggling.

On the positive side, they did report near 1 moa accuracy, and the bullpup is remarkably short and size efficient. It might be the most size efficient in the world (32.25" w/ 18.5" barrel + suppressor is super short.)

I'd love to see his stuff actually get proper testing and development to be honest.

I dunno if that could be called "proper testing", but here are some bullets manufactured:

Those bullets were then loaded:

and fired for accuracy:

then with a radar to determine the CD:

the blue curves are the measurements for 5 different shots (i7 around 0.89), and the red curve is the computed form factor (~0.75).

You can see that the difference is real...

Excuse the profanity, but it's about fucking time militaries got their act together on good ballistic shapes, hopefully others will follow suit

And for the record I am not Anti-Nathaniel,

Nor am I.  Actually, I have quite high regard for his knowledge and talent.

All I'm saying is that it is not logical to tout unproven designs as solutions.