Takeaways from the first 30 minutes of questions

1. Textron was indeed disqualified prior to the RFP phase of the program for "not meeting requirements", although he was not able to specify which ones (let the speculation commence)
2. SIG apparently had the "most value" for the army
3. They weren't able to confirm whether it could penetrate lvl4 plates
4. It is not intended to replace 5.56 and 7.62 NATO

What is the point if it is _not_ supposed to replace the NATO standard cartridges???

7.62 could be kept for vehicles and non infantry use machine guns. Artillery and engineer units have a lot of machine guns that aren't humped around.

6.8 would probably only be used by Infantry, Rangers, Special Forces and maybe dismounted Cavalry.

I think that it is unreasonable to believe that the US will not be soon running into at least some foes who are able to wear the kind of protection that it has been using for a couple decades.  The price of effective body armor is falling every day and the current events are pointing out WHY it is worth getting.  As slowly as the US Military works, it is important to at least have something available to deal with even small groups of well armored adversaries.  The US may even learn something and (reasonably) quickly develop a better alternative.*

I'm not arguing that the US will not encounter armored adversaries, nor that it should not develop methods of countering them.

Rather, I'm saying that the threat posed is not acute enough to justify rushing into a new caliber/case technology that appears to be suboptimal, especially as once adopted the caliber may be around for decades.

If there was any chance of TV's polymer cases working, every effort should have been made to bring that technology across the finish line, rather then re-investing in metallic cases that are comparable in weight to brass.

The Army began pushing to arm infantry squads with more potent weapons in 2017, when leaders told Congress that the service's M855A1 5.56mm enhanced performance round would not penetrate modern enemy body armor. Ultimately, the Army plans to equip infantrymen with rifle and automatic rifle variants of the NGSW, which is chambered to fire a specially-designed 6.8mm projectile.

As a short-term fix, the Army selected the new M110A1 -- a weapon it originally chose in 2016 as its new Compact Semi-Automatic Sniper System -- to serve as the SDMR. It will be used with the service's new 7.62mm enhanced performance round to give squads more penetrating power to defeat enemy body armor, Army officials say. 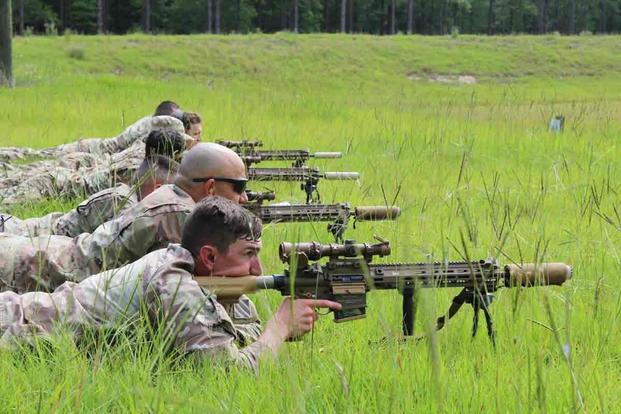 Emeric had mentioned the French are going a similar route, using Tungsten DM151 in their 7.62 DMR's as an AP squad capability. This load offers superior performance to the now outdated M993, and should be capable of fulfilling the Armys AP needs for the next few years or more.

I just dont see the need to rush into what looks like a sub-optimal solution.

That said, its possible TVs cases just dont work / cant be fixed. But until thats confirmed I think the choice of the SIG case is a serious mistake.

Yes, the TV ammo is technologically superior, but it cannot at present be fired in the SIG weapons.

Similar to the already demonstrated 6.8TV conversion of the M240.

NGSW is specifically intended for "Close combat troops" which the Army has defined as Infantry, Scouts, and Combat Engineers.

Unless they also field M240 conversion kits, though, even infantry units with 6.8mm squad weapons are going to have a ton of 7.62 machineguns, both on vehicles and in weapons teams (unless they use the M250 to replace the M240s, not just the M249s in the rifle squads).

It was kind of remarkable how little they had to say about the actual firearm in that hour. The only hard data we got, I think, is confirmation that SIG's ammo is at least somewhat lighter than 7.62 NATO. And that the rifle is confirmed to be around 8lbs, while the AR is confirmed to be around 13lbs. We already knew that, but its at least useful to know that the guns stayed that weight through testing.
Otherwise there was a lot of saying very little.

Something I did notice, was that they came back to talking about how quickly they had everything moving in this project. They describe how what would have been a nearly 10 year project was expedited to only take a couple, for example. I guess they know something we don't it seems.

Ironically, the fact that the SIG 6.8 is indeed suboptimal, at least in cost and weight of ammo, may keep its use limited enough that it will be easier to replace with a more effective solution.  Whatever that will be.

The most important parts of NGSW will probably be the smart optic and the adoption of a rifle/carbine with a foldable stock.  If the US Army refuses to use bullpups, hopefully the barrels of its weapons can be kept to a reasonable length by utilizing a folding stock.

What is the point if it is _not_ supposed to replace the NATO standard cartridges???

The purpose is to give the close combat force overmatch capability against "near peer" opponents.  See 2:11-2:42  https://youtu.be/nTYzGuAcaUw?t=131

stancrist said: Yes, the TV ammo is technologically superior, but it cannot at present be fired in the SIG weapons.

Similar to the already demonstrated 6.8TV conversion of the M240.

Yes.  I didn't say the SIG guns can't be converted to fire the TV ammo.  I think such a conversion almost certainly is possible.

The problem is that it would take time to develop and test the conversions, but the Army clearly wants to field NGSW ASAP.

Also, the need to increase barrel and overall length to get the same velocity would undoubtedly be considered undesirable.

And IIRC earlier in the thread somebody (Guardsman?  Emeric?) reported that there were accuracy issues with the TV ammo.

All of which means the TV ammo may not be as optimal as you think.  It may be that the SIG ammo is actually the best option.