I recently became aware of the Spike SR missile, which is a really promising weapon design.

Essentially, its a cross between the AT4 disposable rocket and the Javelin ATGM. 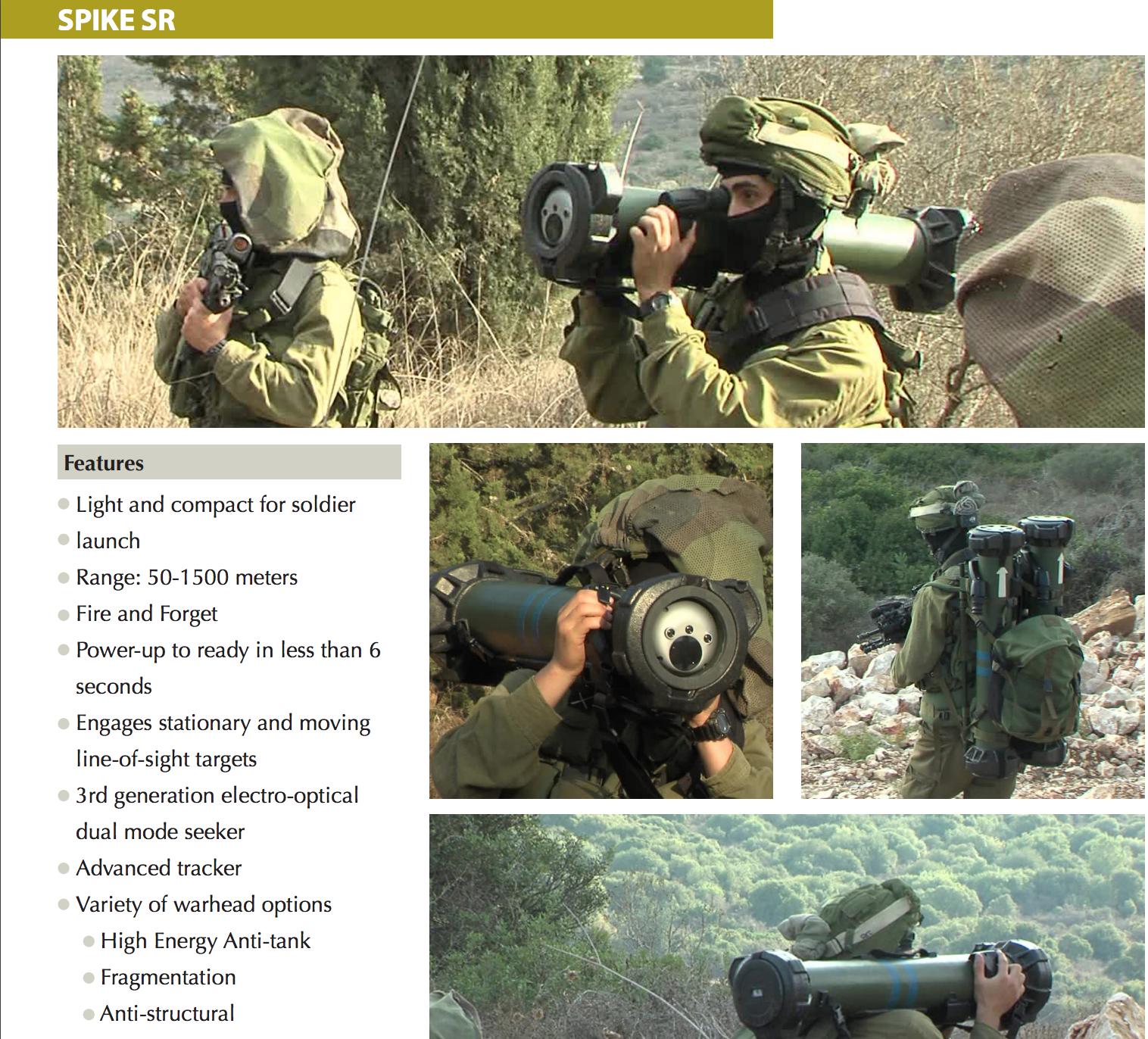 Whats pretty revolutionary about the design is that its a self contained, disposable, guided missile.

Whereas the Javelin or similar use a separate Fire Control Unit with its own thermal camera for targeting, the Spike SR uses the missiles seeker itself as the target designator. The missile simply routes what it sees to a little digital viewfinder on the tube for the soldier to see what its aiming at.

This is a huge advance.

-Overall missile system is lighter (Javelin FCU is 14lbs by itself). By comparison, the complete ready to fire Spike SR is 21lbs.

-Each missile tube is independent, so it is no longer a crew served weapon. With Javelin, 2 men carrying 2 missiles can only fire 1x at a time, and then must swap the FCU to the other missile. With Spike SR, both can fire at the same time, or engage 2 separate targets.

-Overall system is much cheaper, as expensive FCU is omitted. Spike SR is reportedly $75k. Whereas the Javelin FCU costs $126k and then $77k for the missile.

Overall, the Spike SR is very promising. But perhaps even more promising is its ingenious aiming system that eliminates the FCU. This style of design opens up a whole world of possibility for lightweight, semi-affordable, guided munitions.

For example, its possible in the future we could see something like a Guided M72 LAW, which uses a simple fold out LCD screen as the 'optic.' Or this system could be adapted to the compact Martlet missile to allow it to be used as an infantry weapon.

1
ReplyToggle Dropdown
Msg 2 of 17 to gatnerdgatnerd
In reply toRe: msg 1

Very reminiscent of the Predator Short-Range Assault Weapon that the USMC bought in limited numbers (a few hundred) around 2004.

My one concern about using a missile seeker as the FCU is that seekers tend to have very narrow FoVs, while the Javelin FCU (for example) is quite useful as a surveillance sensor even without a missile.

1
ReplyToggle Dropdown
Msg 3 of 17 to gatnerdgatnerd
In reply toRe: msg 1

How resistant to counter-measures is it?

0
ReplyToggle Dropdown
Msg 4 of 17 to taschoenetaschoene
In reply toRe: msg 2

My one concern about using a missile seeker as the FCU is that seekers tend to have very narrow FoVs, while the Javelin FCU (for example) is quite useful as a surveillance sensor even without a missile.

Possibly remedied by the improved resolution of relatively cheap sensors and a reduced range. The Javelin has a 64x64 sensor and a 2.5km range, so if you want to resolve anything at that distance you’ll need a narrow field of view. Modern “cheap” sensors are 300 to 600 elements square so would give up to ten times the field of view for a given range. The shorter range would give you an increase in field of view in proportion to the range. The Spike SR could have a further 60% wider FoV compared to Javelin.

0
ReplyToggle Dropdown
Msg 5 of 17 to FarmplinkerFarmplinker
In reply toRe: msg 3

How resistant to counter-measures is it?

As an passive imaging fire and forget weapon, the only countermeasures would be hard, dazzle, obscuration or modification of your signature.

0
ReplyToggle Dropdown
Msg 6 of 17 to RovingPedantRovingPedant
In reply toRe: msg 5

We are quickly reaching a point in electronics where there’s no reason you couldn’t turn anything LAW sized and up into a fire and forget weapon for less than $6,000, including reseller markup. What lags is not the technology so much, but expectations — things cost such and such because they always have, and if the manufacturers can incorporate measures to make it less expensive on their end then great! Additional margins. But it doesn’t get passed onto the customer (govt) save for whatever is necessary to ensure the bid is won.

1
ReplyToggle Dropdown
Msg 8 of 17 to gatnerdgatnerd
In reply toRe: msg 1

Luckily for us both the javelin missiles themselves and the fcu are somewhere in the process of an upgrade that will drop the cost and weight of the fcu while making it capable of much longer observation and resolution range.

The javelin is still going to be better than this in some key ways, but at $75k a pop you can get two of these spikes for the price of one pike!

I know which of those two I'd rather have

1
ReplyToggle Dropdown
Msg 9 of 17 to RefleksRefleks
In reply toRe: msg 7

We are quickly reaching a point in electronics where there’s no reason you couldn’t turn anything LAW sized and up into a fire and forget weapon for less than $6,000, including reseller markup.

Well, yes, but actually no.

At least if you want a weapon that is safe and reliable in all weathers and conditions.

You could make a system that works* for a low price but it would be a cheap system. You wouldn’t necessarily know what capabilities** you weren’t getting either.

* for a given value of “works”

** things like “functions in the rain”, “doesn’t accidentally go off when you are using your radio” or “doesn’t loop back onto operator”

I don't know much about realistic costs, but it does seem like a fair amount of work is going into lowering costs for sensors.

This method by DARPA looks like its trying to create a 'standardized' seeker that could be used across multiple platforms, increasing economy of scale and lowering costs.

BAE Systems tested the seeker during the first phase of DARPA’s Seeker Cost Transformation (SECTR) program. The SECTR seeker integrates with a wide range of weapon platforms that use munitions and can operate in day or night. It enables autonomous precision guidance via passive electro-optical and infrared sensors in environments where GPS navigation is unavailable or unreliable.

“Low-cost, precision munitions are critical to our customers, which is why we’ve developed a flexible seeker that radically lowers the cost typically associated with precision guidance,” said Mark Meisner, a chief scientist at BAE Systems. “The SECTR program is allowing us to deliver advanced sensing and navigation capabilities for munitions to warfighters faster.”