In the Azerbaijan-Armenia conflict, we have see the use of a very promising new drone called the Orbiter 1K. 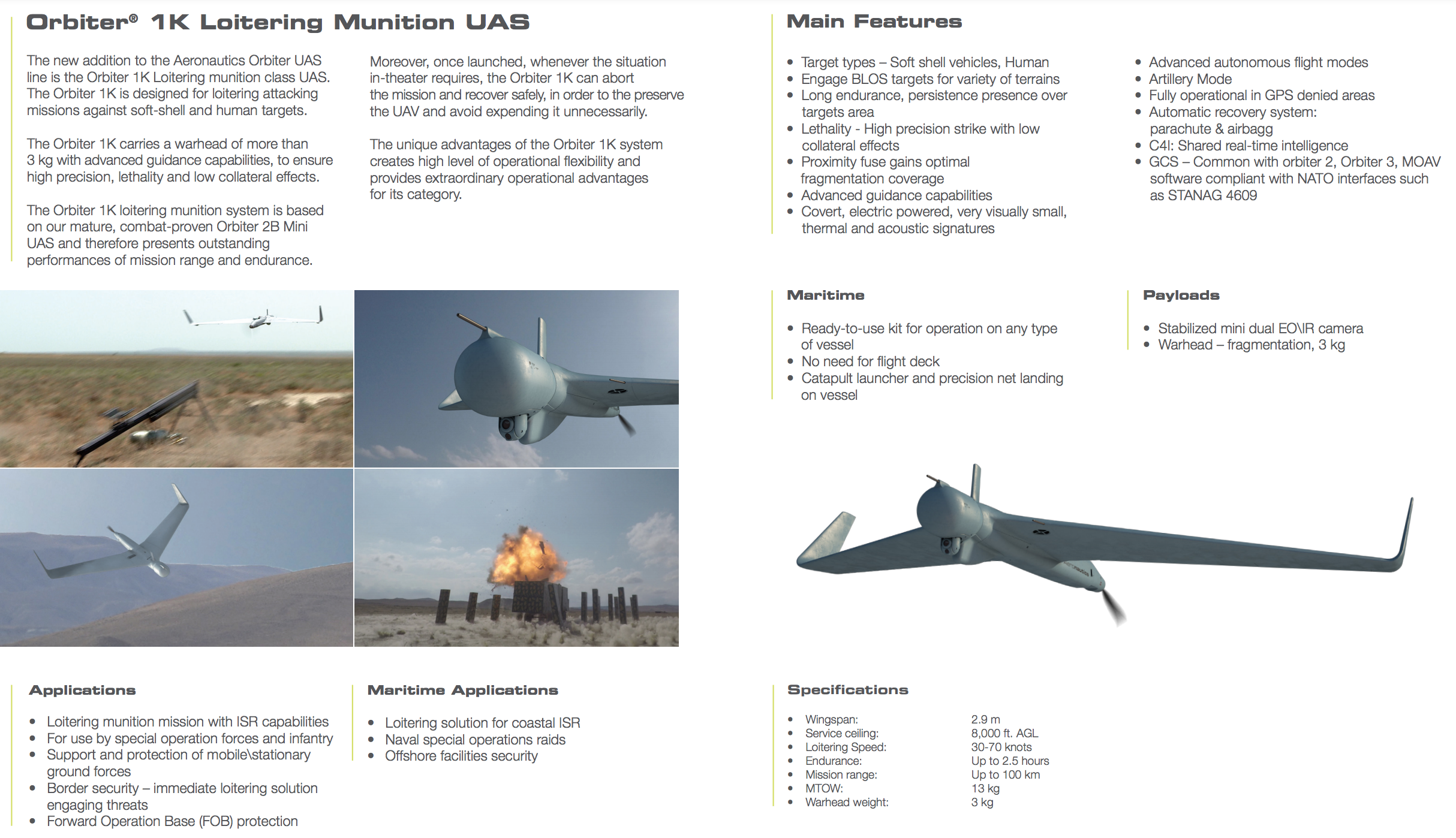 And video of launch, the pre-fragmented airburst warhead, as well as the parachute recovery system:

Small drones (Raven, Scan Eagle, Blackjack) are typically unarmed, and can only be used for surveillance and to direct targeting from other weapons.

Meanwhile, Loitering Munitions (Switchblade 300, Switchblade 600) are single use 'slow missiles.' Once fired, they do provide some surveillance capability, but their flight time is only 10-40 minutes, with a 10-40km range and they are single use only - they cannot be recovered and used again should no target be found.

What makes the Orbiter 1K remarkable is that it occupies a very promising Niche between Small drones and Loitering Munitions.

- Launched by small 'slingshot' - does not require airstrip

-Recoverable: Because the Orb 1K has a parachute, it can be recovered and used again and again.

-Firebase security: just keep one of these over the firebase at all times for ISR and Defense.

-Air surveillance + Close Air Support for Infantry. For example, every squad/platoon that leaves the firebase could have an Orbiter 1k overhead, or have it scout ahead both before and during a mission.

Now the downside. At ~$75k each, requiring minimal infrastructure, and a design that has been sold to many different countries, its highly likely that NATO could face Orbiter 1K's, or very similar drones.

So far it has killed a bus.

Following the Armenia-Azerbaijan conflict  with Azeris fielding plenty of armed and suicide drones vs an opponent armed with legacy soviet gear.  , the war seems to be in a stalemate with small Azeri gains in territory against a quasi-state actor ,sure the losses in Armor seem considerable but end of the day Armenian separatists are still kinda holding the line.

While the suicide drones and other armed drones are definitely a threat that needs to be countered to minimize the losses to high-value military gear, they showed great impact in low tech war in Libya, Syria, Azerbaijan, but in all these occasions, the end result was at best a stalemate (SAA in Syria retook all the goals on M5 ,In Libya things ended up as a standoff and in Ajzerbajan progress bogged down,) they are far from war winning weapon some make them to be ,even against non peer actors .

I think their introduction is likely to be very transformative, similar to the IED.

The IED turned traditional mechanized infantry on its head, forcing the use of either foot patrols, or fielding of completely new vehicle designs purpose built to resist them.

Orbiter and its like (Armed, airstrip independent small drones) are poised to be the IED equivalent Disruption to traditional Western Air Superiority.

US infantry hasn't faced hostile air attacks since Korea, if even much then. The reason being that the US/NATO maintains superior Fighter, Bomber, and Surveillance, which they use to destroy an enemies air assets prior to any ground launched invasion.

Armed Airstrip Independent Small Drones (AAISD) fundamentally change that dynamic. AAISD are essentially 'insurgents of the sky' in that they are small, hard to find, and can operate with little visible infastructure. That means they cannot be reliably destroyed or spotted prior to invasion.

Whereas a drone like Predator requires an airbase, you could fit 3-4 Orbiters + launcher + controller in a 2 car garage. And they could be launched from the driveway using the little slingshot with 10 minutes of setup and couple guys - and then be used to strike targets as far away as 100km.

The result is that even with complete Conventional Air Superiority, Western troops would still be facing precision air attacks. Worse still, Orbiter is very hard to detect with the naked eye, and has a low radar and IR signature.

As such, I expect we'll have to see SHORAD deployed down to the platoon, if not squad level.

0
ReplyToggle Dropdown
Msg 5 of 7 to gatnerdgatnerd
In reply toRe: msg 4

The IED turned traditional mechanized infantry on its head, forcing the use of either foot patrols, or fielding of completely new vehicle designs purpose built to resist them.

No using them as the police turned mechanised infantry on their head, same as happened in Ireland 50 years ago where they largely gave up using roads. The first design response to widespread use of  mines was South Africa. That is where the fire mine protected vehicles came from.

The reason being that the US/NATO maintains superior Fighter, Bomber, and Surveillance, which they use to destroy an enemies air assets prior to any ground launched invasion.

Attacking third world countries sure. Peer would be completely different. The lack of AA defence in NATO is mostly laziness and cost cutting.

Worse still, Orbiter is very hard to detect with the naked eye, and has a low radar and IR signature.

It's been recognised that it would become a threat for a very long time, but no one but China and the Russians have developed counters that were more than prototypes. New sensors and the ability to deal with the munitions as much as the drones themselves appears to be the solution being sought.

0
ReplyToggle Dropdown
Msg 6 of 7 to gatnerdgatnerd
In reply toRe: msg 4

I think peer war these things would be much less effective, as EW and anti air defenses could make some of the drone operations much harder to conduct effectively ( at least until some sort of low cost AI is flying and targeting for them ,without remote control) . and  lets be honest SAM and SPAAG have since WW2  done gunnery practice on small drones so these targets are something that should be easy enough to defeat. The issue is more that western forces lack organic air-defenses due to being used to vast air supperiority.

*of course target drones have IR flares and radar reflectors to make for a juicy target, but target size , speed and altitude is comparable to 'attack drones'

Hanwha's EOTS is fitted with three sensors: A infra red camera, a TV camera and a laser range finder. During testing, the EOTS demonstrated the tracking of a small UAV target (2.5 meters x 2.0 meters) moving at a speed of 200 Km/h at a distance of 5 Km. Detection range is even larger.

I have to agree here.

The azeri Armenia situation is pretty clearly showing that even in the hands of people who have access through turkey to all of the requisite ewar and etc support infrastructure to properly support a drone blitz, they are far from an automatic I win button like some people both in and out of government believe they are.