The RWS optics might not be well suited of scanning the sky 24/7, but a dedicated optic on at least one of the vehicles like that Hanwha EOTS could ,then have target data distributed to units RWS upgraded with some AD function, 40mm airburst like Nammo has demonstrated with Kongsberg RWS might be the ticket.this one might do it without dual-feed grenade luncher as it seems to be a versatile projectile.

Watching the vids of RWS ,most are slow as hell and not very 'fluid' in their movement ,they kinda go from pointing at point A to point B in a rather rough way,would need be considerably more fluid and faster moving for Air defense role but that is likely very doable. At the prices manufacturers charge for RWS you would expect this to be of no extra cost.

But likely the EW might be the best shield.

Like Poliorcetes said Chinese can likely make this in absolutely mindboggling numbers for not much $$ shooting down and chasing each drone might not be practical.

One more thing,i can only imagine how these things impact troops morale as suddenly anything moveing or making noise in the sky can be a threat not just stuff on the ground.

0
ReplyToggle Dropdown
Msg 10 of 18 to poliorcetespoliorcetes
In reply toRe: msg 7

That would be an extraordinary waste of money. Also they are individually controlled in the video which makes them vulnerable to ECM, decoys, and distinguishing live targets from dead ones. Even a battalion of these things (24 launchers based on artillery organisation) would be less than 1000 rounds. If the round cost is $20000 and the vehicle $ 1000000 it is still not something that will be practical in the numbers you are suggesting.

with economies of scale and leveraging as much commercial component as possible, I find feasible to reduce one order of magnitude your figure. I would assume that this CH-901 is going to be less exquisite that an AeronVironment switchblade 300 or a Coyote

Civilian drone industry is almost entirelly theirs. That should mean something

0
ReplyToggle Dropdown
Msg 12 of 18 to poliorcetespoliorcetes
In reply toRe: msg 11

with economies of scale and leveraging as much commercial component as possible, I find feasible to reduce one order of magnitude your figure.

By pulling numbers out of your ass you mean. A military grade system with a multi year shelf life will not be using a lot or any commercial components. The issue is as much the logistics of fielding them as their cost, so there might well be massive numbers, but their success will depend as much on SEAD, ELINT and ECCM as numbers.

I cannot understand how my post is connected with your answer. Excuse me for grossly figure any quote

The drone used is supposedly CG-901 ,is a fairly short range drone ,10km is close to some ATGMs and this is much slower than ATGM.

The CH-901 kamikaze drone combines the advantages of a drone and a bomb and can hover for 40 minutes before attacking a target. It can be used by special forces during counter-terrorist operations. CH-901 is a portable assassin drone that weighs 9kg and can be easily carried by one soldier and launched from the field to hunt down and attack opponents. The CH-901 kamikaze drone can be equipped with warheads or a camera to perform reconnaissance missions and detect enemy positions. The CH-901 can fly at speeds from 7 to 120 km / h with a range of up to 10 km and, loaded with a high-explosive warhead, can hit lightly armored targets. CH-901 can be armed with a fragmentation charge or HEAT warhead capable of penetrating 10 cm of armor and destroying tanks and light armored vehicles. The CH-901 is capable of detecting targets at a distance of more than 1.5 km from an altitude of 450 m. The CH-901 is launched from a container and can be ready for use in less than 3 minutes. 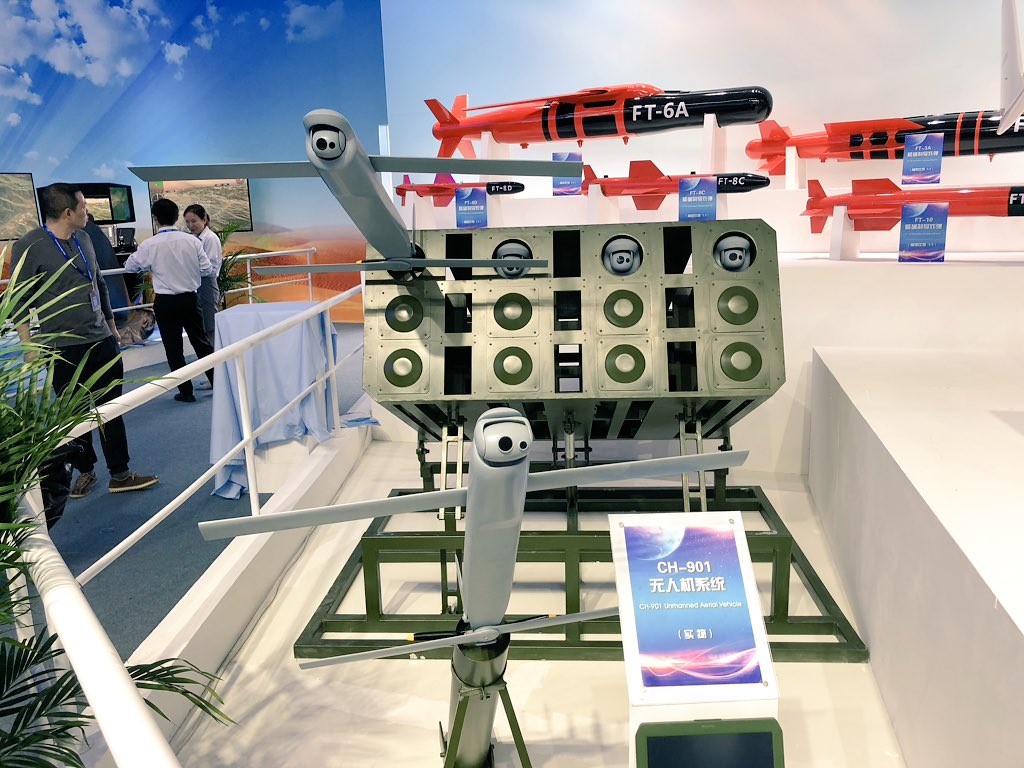 The CH-901 kamikaze drone combines the advantages of a drone and a bomb and can hover for 40 minutes before attacking a target. It can be used by special forces during counter-terrorist operations. CH-901 is a portable assassin drone that weighs 9kg and can be easily carried by one soldier and launched from the field to hunt down and attack opponents.

So basically switchblade. Is there a version that is completely autonomous? The thing I noticed is that all these suicide drone videos I've seen have been manually targeted. The original 90s concept was for the drone to fly to a locale and then hunt for targets autonomously, but that does not appear to be part of these current drone's behaviour.

Switchblade is smaller and with less TRANSMISSION range than CH-901. CH-901 Transmission range could be extended with some sort of mesh network without a more powerful emitter

0
ReplyToggle Dropdown
Msg 17 of 18 to poliorcetespoliorcetes
In reply toRe: msg 16

Switchblade is smaller and with less TRANSMISSION range than CH-901. CH-901 Transmission range could be extended with some sort of mesh network without a more powerful emitter

it's 4 times the size so of course it's more capable.

0
ReplyToggle Dropdown
Msg 18 of 18 to poliorcetespoliorcetes
In reply toRe: msg 16

Original switchblade is really just too small for any Peer conflict with armor involved, was designed to chase guys with Ak's and flipflops and maybe ruin a Toyotas paint job. But new much larger Switchblade 600 is already out there.

Taken from Russian site so its google translate

I justify.
1. Video signal transmission from the UAV to the control station (CS).
1.1. Under normal conditions.
1.1.1. Already at distances of 10-15 km, under normal conditions, the US is in radio shade in relation to the EW station and the EW interference almost does not reach.
1.1.2. US is usually placed at a distance of 10-40 km from the front line. Electronic warfare stations are usually placed at a distance of 10-20 km from the front line.
1.1.3. Thus, the signal from the UAV at an altitude of 3 km reaches the US perfectly, but the interference of the EW station does not. The video stream goes smoothly.
1.2. When using a repeater plane for a UAV or in the mountains, the situation is different. But there the following points come into effect.
1.2.1. The control stations usually have directional antennas of high quality, this is 15-30 dB of gain.
1.2.2. Beamforming is used on small and medium-sized UAVs, which is about 5 dB.
1.2.3. The signal strength decreases according to the square of the distance.
1.2.4. Thus, if the UAV, the electronic warfare station and the US are located in a triangle with sides of 40 km, the interference power should be approximately 500 times more powerful than the signal from the UAV.
1.2.5. At such distances, the time of arrival of the signal from the UAV, the time of processing by the computer and the time of the arrival of the signal from the electronic warfare to the US total about 500 μs, which is comparable to the time the packet is transmitted by the radio modem, before switching to another frequency. As a result, the method of automatic detection of the operating frequency does not work, and you have to jam a wide range of frequencies. This also increases the requirements for the transmitter power of the electronic warfare station.
1.2.6. Thus, at point 1.2.4 and a 10-watt transmitter, the UAV will need> 5 kW power of the electronic warfare station. And this is if the DC is not in radio shade.
1.2.7. The repeater aircraft can always try to maneuver in order to leave the UAV in the receiving area, but keep in the shadow of the electronic warfare station.
1.3. With a UAV distance of several kilometers from an electronic warfare station, the requirements for interference power are reduced hundreds and thousands of times, and the transmission of a video signal becomes impossible.
1.3.1. But, it is often possible to select such parameters of the height of the UAV and the height of the repeater aircraft, at which the UAV hangs directly above the electronic warfare station and at the same time transmits the video signal completely freely.

2. Transmission of control signals from the US to the UAV.
2.1. Even if the interference is 10 times stronger than the signal, in fact, you can safely receive the desired signal. It just takes 10 times more time.
2.2. The speeds of modern radio links are usually from 1 to 100 Mb / s.
2.3. If we take the average length of the control command to be 10 bytes, and the minimum required control frequency is 1 command per second, then the minimum flow will be 10 b / s.
2.4. At 10 Mb / s, this would require one million times the interference over the signal. I will not even count the required power of the electronic warfare station.
2.5. At the same time, the UAV has little opportunities in signal selection.
2.6. (in real life, everything is much more complicated and better for electronic warfare, but the calculations well illustrate that a seemingly simple task, to hammer a UAV receiver, is actually very, very extraordinary).

3. There are, however, exceptions to the above. This is the exploitation of known bugs in protocols and implementations.
A classic example is GPS spoofing. But we must also remember that, on the other hand, progress does not stand still. For example, from 2022 a new version of GPS is launched.

4. My conclusions.
4.1. EW ground stations can only protect themselves with interference, and even then, not always, and at the same time are extremely vulnerable against homing dronikadze.
4.2. Therefore, the REB functions can only be considered as a bonus addition to the RTR functions.
4.3. Emphasis should be placed on the electronic warfare aircraft systems.
4.4. RF Armed Forces, relying on ground-based electronic warfare and ground-based air defense in the risk zone.
4.5. The problem of combating UAVs does not have a simple solution and requires a combination of short-range and long-range air defense, RTR and REB, acoustic and optical reconnaissance, long-range strikes against ground targets.
4.6. The balance of cost and efficiency of UAVs / ground defense against UAVs has shifted significantly in favor of UAVs.
4.7. At the same time, existing UAVs are a specific weapon with many restrictions. In fact, the current generation of UAVs is a means of measured, methodical and unhurried front-line terror.
4.8. With opponents equal in strength and their active actions, existing UAVs cannot make a decisive contribution to the conduct of hostilities.
4.9. At the same time, the next generations of UAVs - swarm UAVs with high decision-making autonomy and salvo launch are extremely dangerous weapons that break the usual notions of warfare.