If something like the 7.5 FK would be considered, I wonder if the US would also consider non-traditional bullet shapes.

I doubt it.  In the seemingly unlikely event of 7.5 FK being seriously considered, I'd expect that a traditional (albeit rather stubby) spitzer bullet would be used.

I think there are YouTube videos of such bullets tested against body armor.

A new 'Krinkov Class' / 'SBR Class' PDW has been released.

The Dissent (awful name) by CMMG.

-->Pretty comparable weight and length to the MP7, with the ability to use 5.56 mags and ammo. Downside is not Holsterable, and no doubt tremendously loud.

It's also slightly shorter with +1" of barrel length compared to the SIG Rattler, which is 16" folded with a 5.5" barrel.

Action looks to be Direct Impingement, while deleting the traditional AR buffer tube. 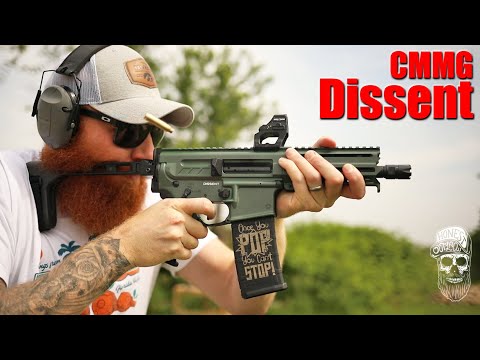 New for 2022, the CMMG Dissent is a lot of punch in a little package.Get cool swag: https://the-honest-outlaw.creator-spring.com Here is a link to donate to ...

I think a 7.5"-8" barrel could make a compelling Carl Gustaf / NLAW / Milkor companion for those not looking into a dedicated PDW caliber ala 5.7/4.6.

I went a slightly different direction but got to pretty much the same place...

Mine is 5.56, has an 11.5" bbl and will soon be sporting a brake and blast can though it doesn't really need it because it already shoots extremely nice.

The foxtrot Mike fm15 is also a DI gun just like the cmmg dissent, though I think I like what cmmg is doing with the recoil springs better.

I do question the exact niche the cmmg gun is going for too...

Realistically with the 6.5" bbl and no brace or hinge in it's factory weight spec it's going to wind up substantially heavier once it's actually in usable configuration.

I believe the fm15 11.5 started out around 6 pounds but once I threw on the hinge, tailhook mod 2 magnifier and dot it's definitely not 6 pounds now.

It's still extremely light and handy but it's definitely no feather weight.

I wonder if cmmg did the sling qd point on the rear below the picatinny interface like foxtrot Mike did, that sling point is darn handy

0
ReplyToggle Dropdown
Msg 638 of 639 to roguetechieroguetechie
In reply toRe: msg 637

Personally I'd love to see a Pic rail adapter to use the polymer B&T MP9 stock:

That should put stocked weight at ~5.3lbs.

Yeah I'm a fan of the jmac and the mp9 stock would be even better in some cases.

This said, due to the nfa I can't "stock" this gun.