"The French army is still using ~10,000 M2HB manufactured before 1944, and we used then heavily since the war in Indochina."

The US has had similar results - there was a discovery of one made in 1933 that was still in service and operating perfectly: 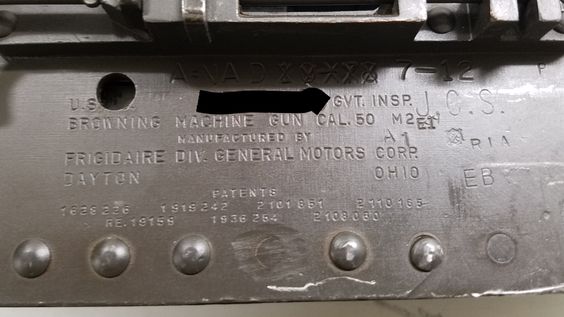 The design seems to be so successful that it has essentially killed off any competition. As far as I can tell the only alternative .50 bmg machine gun is the STK50 from singapore?

0
ReplyToggle Dropdown
Msg 50 of 81 to JPeelenJPeelen
In reply toRe: msg 46

I cannot help but repeat my view that a cartridge according to requirements should be chosen first. After that, an "optimal"  (compromise of conflicting design goals) weapon should be designed around it.

The question is whether we will actually see that occur. Theres been talk of a desire for a 'GPC' type intermediary cartridge for 15+ years, yet theres yet to be any manufacturer step up to the plate and create an intermediary sized weapon. Perhaps the LWRC SIX8 as an exception.

Meanwhile the cartridge we're seeing genuinely take off a bit militarily as a 5.56/7.62 alternative is 6.5 Creedmoor (and .260 Remington per Emeric for French SF.) The reason is that it offers enhanced ballistics with a simple barrel change.

A superior round, but requiring a brand new series of assault rifles and LMG's to be developed to fire it, would likely still be a topic of debate on internet forums...

For a .50 replacement, the prospects of a 'perfect' cartridge are even grimmer. A rifle is complex, but at the end of the day, it's a rifle, which most small arms manufacturers are capable of designing and manufacturing. Whereas a Machine Gun is both much more complex and requires far more in terms of testing and long terms durability, and far fewer small arms companies are capable/familiar with producing them. Much less producing a HMG that could compete with the prolific, legendary, and beloved M2... that would be a risky R&D venture to undertake without a gov't contract behind it. And until the new weapon was developed, the new cartridge design could not be tested.

Whereas if '.61 Emeric' is backwards compatible with .50 bmg weapons, that bad boy could be tested within a year and with a fraction of the R&D budget. Get a firearms company or even machine shop to turn a new .61 M2 barrel, neck up some .50 BMG brass, and lathe turn some brass .61 solids, and you're in testing mode. Thats of course a bit flipant in terms of the work involved, but its certainly a much easier prospect than creating a new cartridge brass, new bullet, and new automatic weapon all at once.

The last issue is one of requirements. Since the .50 BMG/M2 is a sort of ballistic 'Swiss army knife' (never the perfect tool for the job, but a tool that works for many jobs in the field) it's hard to pin down what the requirement would be to optimize the cartridge for. Is the goal a lighter cartridge/weapon with comparable penetration to .50 API? Is the goal better supersonic range than .50 API? Better incindiary effect? More penetration? More power then .50 BMG but with smaller weapon than 20mm cannon? etc.

In that light, ".61E" is potentially promising. Get a more powerful / more API round than current .50bmg, while keeping polymer cartridge weight comparable to current .50 bmg brass, and the ability to be used in legacy weapons / future .50 sized weapons and mounts.

0
ReplyToggle Dropdown
Msg 51 of 81 to gatnerdgatnerd
In reply toRe: msg 50

Perhaps I am missing something.  How is it "ideal" to design a cartridge in complete disregard for weapon characteristics like barrel length, feeding reliability, magazine capacity, etc?

The question is whether we will actually see that occur.

I would submit that we sorta have seen it happen with the 6.8 TVCM, which was designed without regard for what seems likely to be the acceptable barrel lengths of NGSW-R and AR.

Theres been talk of a desire for a 'GPC' type intermediary cartridge for 15+ years, yet theres yet to be any manufacturer step up to the plate and create an intermediary sized weapon.

Nearly all of the talk about an intermediate-length GPC has been in internet forums like this one.

There's been little military interest in such a cartridge, and no real demand in the civilian market.

Perhaps the LWRC SIX8 as an exception.

No.  The SIX8 receiver length is the same as that of 5.56 receivers.

0
ReplyToggle Dropdown
Msg 52 of 81 to gatnerdgatnerd
In reply toRe: msg 45

Do you think it would be backwards compatible with current .50 bmg weapons?

That will depends on the weapon manufacturing year, probably.

Current production M2HB are OK with those SRTA ammo.

In terms of down range performance, do you see the value of the .61 primarily in increasing penetration, or increasing incendiary payload?

If you want to increase the penetration while keeping the .50 "Form Factor", then the .460 Steyr or the .416 Barrett are the way to go (similar core length, but higher MV and better BC, so much more impact velocity).

2
ReplyToggle Dropdown
Msg 53 of 81 to EmericDEmericD
In reply toRe: msg 52

In terms of concrete penetration, is the rule similar to steel and ceramic,  where core length is paramount?

0
ReplyToggle Dropdown
Msg 54 of 81 to gatnerdgatnerd
In reply toRe: msg 50

One bureaucratic snafu on the .61. Being over .60, that would make it a light cannon, rather than a machine gun by US military definition.

Other than that, it would be awesome!

0
ReplyToggle Dropdown
Msg 55 of 81 to gatnerdgatnerd
In reply toRe: msg 53

Today, most APCs are already immune to 14.5x114 mm AP rounds on the frontal and lateral arc, so I don't think trying to increase the AP capability of a .50" is the way to go.

The .50'' SLAP is already existing, fielded and delivering 14.5 mm AP performance, but only the USMC is using it, and in limited numbers.

The .50" MP, on the other hand, is used by nearly every western armies, and gives decent AP capability + 1 g of HE payload and fragments. Those fragments are not going to penetrate any armor but are great to defeat cameras, sensors, antennas, RWS... located on every current APC, and also to effectively defeat "technicals" or suicide bomb cars.

The current way to "upgrade" the M2HB is to replace it with a 40 mm "High Velocity" grenade launcher, so a truly "high velocity" round that retain the external ballistics of the .50 BMG, but with a bigger payload (the .61" vs. .51" is a ~20% increase of the diameter and ~70% increase of the volume) may be the way to go (or the diameter should be increased to ~18 mm to carry enough HE to justify the upgrade, like the experimental 18x81 mm Tarantula).

1
ReplyToggle Dropdown
Msg 56 of 81 to EmericDEmericD
In reply toRe: msg 55

for a 50 replacement, what are you thoughts on a higher powered round which is designed around a very potent Apfsds round. (all of it's ammo options are telescoped including API)

lets say the muzzle energy was 20k Ft Lbs....would the dart be much use against vehicles in realistic scenarios?

Why not just do this?

Yes, a full auto version of the IWS.

Seriously though, wouldnt an APFSDS with 20k ft lbs be more destructive than an API round?