An interesting video.  It turns out that the CRISAT armor used in the trials did not emulate what  was likely to be encountered.  It was just thick enough to eliminate 9mm NATO loadings as an option.

NATO PDW trials: the forbidden saga of "MP7 vs P90"

1
ReplyToggle Dropdown
Msg 2 of 36 to nincompnincomp
In reply toRe: msg 1

Yep, and maybe I can add more context.

The "quest" for a PDW started during the '80s in EU, driven by the fact that most front-line soldiers now didn't have to fight with their rifle, but needed a weapon for self-protection while doing their duty, like firing mortars, canon, or driving a truck. in France, it was called the "ADR" for "Arme de Défense Rapprochée".

The initial idea was to issue a light (less than 1.5 kg) and compact (less than 30 cm) sidearm using a simple & cheap blow-back operation that could deliver lethal fire against lightly protected opponents, at up to 75 m. The project was supported by GIAT which started with a shortened 5.7 mm bullet in a necked-down 9 mm case.

At this same time, FN Herstal (which developped a similar product) was incorporated into GIAT, and the FN Herstal 5.7 x 28 mm SS90 (1.5 g bullet) was loaded with the shorter bullet developped by GIAT to make the 5.7 x 28 mm SS190 (1.7 g bullet) that was tested during the PDW trial. GIAT stopped it's involvement in this program.

The insistence on blow-back operation is why there is a thin Teflon coating on the 5.7 x 28 mm case, to help case extraction.

During the 90s, the idea of a side arm that could be used for self protection up to 75 m grows to 200 m, and the CRISAT protection was added as a comprehensive "lightest" protection level that needed to be defeated.

A point not developped in the video is that no 9 mm AP could defeat the CRISAT plate at 200 m, neither is the .224 BOZ.

HK already had the tools to produce 4.6 mm barrels for the 4.6 x 36 mm and decided to make a shortened version, with a steel bullet. This bullet was a flat base, round nose design, with a small meplat, and was not the same as the current marketed ammo.

At this point, the idea of a <1.5 kg and <30 cm side arm was long gone, both HK and FN Herstal proposing weapons that were similar to SMGs, hence the late requirement that the round should be also fired in a pistol.

At the beginning of this program, the US stated that they already have a PDW, that it was the M4, and that they have no interest in a weapon that was nearly as large as a carbine, needed a different ammo in the logistic chain, and offered very small operational gain vs. the M4.

The P90 vs. MP7 trial was supposed to be held in UK in 2005 but France proposed to used the facility in Bourges to gain some time.

The test results were that both rounds defeated the CRISAT plate up to 200 m, but the 5.7 mm bullet was more effective than the 4.6 mm against unprotected opponents (the 4.6 mm flat nose bullet was prone to go thru gel block without tumbling, and even when the bullet was tumbling the cavity was smaller than the 5.7 mm). On the other hand the MP7 was superior to the P90 from an ergonomic point of view, allowing better hit probability.

Then, Germany proposed to "replay" the test with a new 4.6 mm load called "ultimate combat" (using a heavier steel bullet, with a spitzer shape for better BC and terminal effect), on the premise that this load will be as effective as the 5.7 mm bullet, and that the superior ergonomic of the MP7 will make it a better PDW than the P90.

This idea was not well received by the other allies (France and Belgium) and the recommendation was made that the 5.7 x 28 mm should be used as a replacement for the 9 x 19 mm (at this time, people were also in doubt that the 4.6 x 30 mm, "ultimate combat" or not, could be used in a pistol).

The German position was that the MP7 was small enough to avoid issuing a pistol, that the "ultimate combat" load would solve all the problems found with the original load, and that the Teflon coating on the 5.7 x 28 mm case was heresy.

Without the US to say "well, I listened to your opinions but I don't care, you will do as I do", it was impossible to find a compromise.

On the long run, France decided not to field a PDW along the rifle, but to issue the same rifle with 2 different barrel length (AIF-S and AIF-C), both weapons using the same ammo.

The US followed a different road, keeping the M4 as a PDW, and trying to issue another completely different weapon system for Infantry.

4
ReplyToggle Dropdown
Msg 3 of 36 to EmericDEmericD
In reply toRe: msg 2

I recall reading that it was used by the Belgian police pretty successfully, but the sourcing for that was a bit iffy (some posts made on Five Seven forum years ago.)

I personally love the FN Five Seven - I've shot mine accurately out to 150yds against 1 gallon milk jugs, and recoil is an extremely fast 'pulse' where the slide velocity is so fast that it seems the sights are almost instantly back on target.

1
ReplyToggle Dropdown
Msg 4 of 36 to gatnerdgatnerd
In reply toRe: msg 3

The Ballistics Radio program claimed, iirc, St. Louis SWAT fired a burst or two of 5.7 into a drug dealer from P90s. He supposedly said, "Please stop hurting me" after sitting down. He was said to have taken a dozen torso hits. Don't know how accurate that is, but that was their story.

0
ReplyToggle Dropdown
Msg 5 of 36 to gatnerdgatnerd
In reply toRe: msg 3

I don't have this kind of report.

All I know is that a Five seveN was used during the "Fort Hood Shootout" and (unfortunately) seems to have performed as designed, a police officer was downed with a shot in the thigh and in the knee, and several soldiers that tried to charge the shooter were dropped dead, or severely wounded, during their attempt.

1
ReplyToggle Dropdown
Msg 6 of 36 to EmericDEmericD
In reply toRe: msg 5

Yes, that was the "ADR" (Arme de Défense Rapprochée).

A good example of "the French copy no one, and no one copy the French".

0
ReplyToggle Dropdown
Msg 8 of 36 to EmericDEmericD
In reply toRe: msg 7

Does anyone have any reliable data on the 224 boz performance?

Wiki says 690ft lbs in a 5 inch barrel, which i find hard to believe.

From reading of a decade ago on Five Seven Forum, I recall that .224 Boz produced incredible velocities, but for some reason also resulted in tremendous slide peening and overall wear.

Later versions of the Boz attempted to use a more modest 9x19 sized case but seems to have gone nowhere. .22TCM is now the closest alternative.

It was intended for long/extended barrel handguns:

There are an extremely limited number of them made from STI guns with replaceable breachfaces: 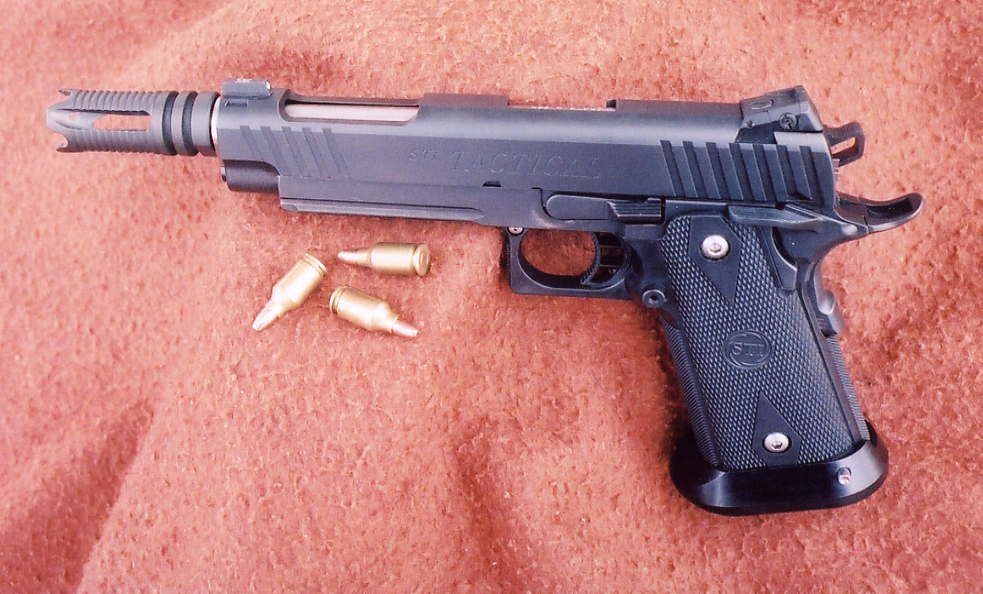 A better option would have been a saboted 5.56 steel solid from the 10mm case. This would allow the projectile to be 100% penetrator, and since its a handgun/PDW, the reduced accuracy of using a Sabot would have (hopefully) been less of an issue then with rifle sabots.

1
ReplyToggle Dropdown
Msg 10 of 36 to gatnerdgatnerd
In reply toRe: msg 9

Man all that to do what can be much more easily done with 7.92x24 VBR

The longer N bullets which fit in 45acp/10mm frames worked quite well just by using a 4-6mm hardened steel penetrator inside a non discarding brass "sabot" that comes apart on impact.

Also because of the reduced diameter of the cartridge case you gain capacity rather than losing it which is always nice.

If you were to apply some of the more recent ammunition technology and tricks to something like the VBR line you could undoubtedly come up with something much more than satisfactory that doesn't have to force you into suboptimal weapon architecture choices too.

If you could get shellshock to make you some vbr "brass" that you load pretty hot (40-50k psi) you'd earn yourself a light pistol with hilariously light ammo that you can stuff 18-22 rounds into without much problem and just call it a day.

To me this seems like one of the better options for pistols because:

1. It doesn't require a bigger gun to make happen.

2. Done right, the somewhat lighter projectiles and etc won't beat up you or the gun as much.

3. You get enough velocity jump in a streamlined enough projectile package to guarantee expansion and consistent performance to the limits of the range you can teach most people to be passable with a pistol at.

4. Using metal mags you could have a g43 grip size with pretty serious capacity.

5. By having a g43 weight gun and 9x19 liberty civil defense weight ammo you're not dedicating excessive weight and bulk to your sidearm/edc. My g19 carries so much nicer with liberty ammo that I don't think the benefit here can be overstated.

I've acknowledged long ago that because this doesn't do anything wildly better (but has solid and worthwhile improvements across the board) that most people who don't carry a gun every day probably won't get it or see the value in it. But the value is there and with the things we do with our pistols now, there's not really any question that this would just plain do it better.