I mean in the manner of focusing the squad around supplying and supporting the SAW/LMG. An extreme example is the WW2 Germans. Where the squad was built around supporting the MG34/42 and worked to support it almost entirely. As in the squad existed to almost to simply facilitate the use of the MG. While few militaries ever replicated that heavy focus as much, most did learn their lessons from it and its effectiveness. And worked post WW2 to have it so that there was a gunner-assistant team and the rest of the squad carried some manner of spare materials to feed the SAW/LMG.

That still exists in the way of most members of a current US squad carrying at least some belted ammo for the M249. And sometimes a spare barrel or so.

Given that our main enemies for the last few decades have been irregular forces, I don't believe we can properly say how effective the organization would be against a real enemy. Anything short of WW2 era equipment would put us above insurgents in the Middle East in terms of modernity and quality. As stated before, during Vietnam, which was closer to a proper war than what we see today, even if still distant. M60s were issued to gunner-assistant pairs.

Generally outside of the Garand and the M1 Carbine, the US went into WW2 and came out of it with a pretty outdated set up. FWIW, the 1919A6 did have a QC barrel however.

0
ReplyToggle Dropdown
Msg 66 of 74 to ApsydaApsyda
In reply toRe: msg 65

That's not what I recall from my time in high school ROTC.  And it's sure not what is shown here, either. 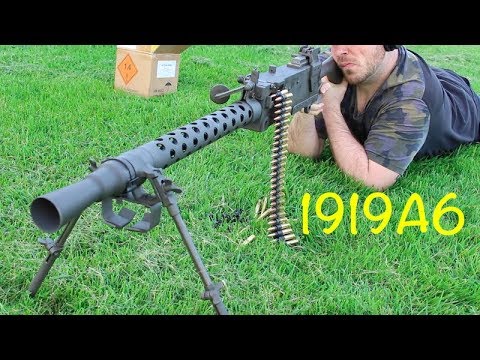 1919A6 Full Auto - Shooting and Disassembly

This video covers the 1919A6 We will do some shooting at the range, and then do a table-top overview and disassembly. We will go over headspacing and functi...

0
ReplyToggle Dropdown
Msg 67 of 74 to stancriststancrist
In reply toRe: msg 66

0
ReplyToggle Dropdown
Msg 68 of 74 to stancriststancrist
In reply toRe: msg 66

That M1919A6 is  the best looking machine gun ever!

0
ReplyToggle Dropdown
Msg 70 of 74 to mpopenkermpopenker
In reply toRe: msg 64

PKMS and an RPG-16? Dude is hardcore!

Or watched too many bad movies.

0
ReplyToggle Dropdown
Msg 71 of 74 to gatnerdgatnerd
In reply toRe: msg 49

And it's a very what came first the chicken or egg problem because there's organizational things that actively contribute to this.

For me there's also another question which is equally important.

Do we even want SCHV belt feds?

One issue with schv belt feds is they really don't hit any harder or give you more reach than your carbines.

0
ReplyToggle Dropdown
Msg 72 of 74 to roguetechieroguetechie
In reply toRe: msg 71

Probably because a spare barrel is rarely needed when the M249 is used in the automatic rifle role.

For me there's also another question which is equally important. Do we even want SCHV belt feds?

Depends upon which "we" you mean.  The Army clearly wants SCHV belt-feds.  The Marines do not.

0
ReplyToggle Dropdown
Msg 73 of 74 to stancriststancrist
In reply toRe: msg 72

Depends upon which "we" you mean.  The Army clearly wants SCHV belt-feds.  The Marines do not."

Supposedly the USMC kept the M249 to be issued on a "as needed basis". Where they are kept I don't know.

FN Herstal UK is now on Twitter and posting some pretty interesting stuff. I didn't know that Evolys was available in 6.5 mm Creedmoor.