Should aggressive dogs be dumped and rehomed from shelters?

Have Y'all Seen This?

BeeGees wrote it, Eric rocked it

A little Micheal Ellis for you

Most important training you can do

Worst behavior a dog can have—must watch   Controversies, Catastrophes and Teaky Moments (Enter at your own risk) 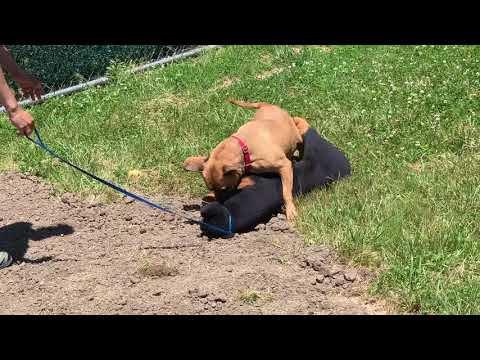 Excerpt of the Canine Behavior Review Webinar (Sternberg and Savocchi)

0
ReplyToggle Dropdown
Msg 2 of 39 to Solitaire13Solitaire13
In reply toRe: msg 1

I couldn’t watch most of it. Too upsetting.

Sue Sternberg is well respected in the rescue community.  She is very outspoken about dog on dog aggression being the absolute worst affliction that a dog can have. She feels it is the most dangerous of all traits and that dog aggressive dogs have no place in society.

I was surprised to hear her say that there is no way that you can provide a dog aggressive dog with a healthy outlet for dog aggression.  I have been saying that all along.

I was also surprised to hear her talk about the pets killed by these dogs when placed into family communities and her concerns about them killing people too.

0
ReplyToggle Dropdown
Msg 4 of 39 to Solitaire13Solitaire13
In reply toRe: msg 3

So if my dog is reactive, I’m supposed to get rid of him? BS.

I guess I should have titled this better. This is a must listen. Listen to Sue Sternberg. This is one of her most informative video clip to date.

Dog reactivity is not the same as dog aggression.  It is highly doubtful that your dog would have attacked a stuffed dog or if he did, would have continued knowing it was a stuffed dog.

0
ReplyToggle Dropdown
Msg 6 of 39 to Solitaire13Solitaire13
In reply toRe: msg 5

Haha, he is more likely to shake a stuffie to death than bother a live dog. It’s more naughty than aggressive. But he has before if they are acting weird. It’s more fun for him than aggression. Once at the vet a bratty little lap dog snarled at him through the door to the office. It is smoked glass. He barked back at the dog until I stopped him. Kind of lunged toward the glass. I swear he was having fun playing more than thinking about killing it. But we did have an issue in a class with a little dog that was squeaking and spinning.  It bothers him when a dog doesn’t act like a dog is supposed to.

I finally watched the rest of it.

I dunno.  But then, I have some dogs that rip stuffed toys into little shreds.  I wonder what the woman would say about that.   Karma -- serial toy murderer, sweetest dog you could ever know to dogs and people.

Frankly, dogs should be confined to a leash or to someone's yard.  That isn't terrible.  Many people take dogs to the vet with muzzles on -- not the end of the world, not better for the dog to be dead.

I am no fan of bully breeds.  But many GSDs would not pass shelter temperament tests that many bully breeds breeze through.  This is because the animals were built into different breeds and are naturally different.  I wouldn't mind it if all pits and their mixes had to be speutered, then in a generation there would be no more, but the people who do love individual dogs would be able to keep their individual dog until it naturally passes or is put down for illness, injury, or aggression.  But there are folks who would put GSDs in that group because of the damage they do, their numbers, their capacity for aggression.  And I wouldn't want anyone to tell me that I have to alter my dog.  So, I guess we are stuck with pit bulls and their mixes.

0
ReplyToggle Dropdown
Msg 8 of 39 to selzerselzer
In reply toRe: msg 7

As puppies mine both shredded toys and ate pieces.  It wasn’t violence, it was boredom and fun.  My last male rescue “killed” a beanie baby. I didn’t see it and suddenly heard this sound like rain. At first I thought he was peeing in the house. Then I saw piles of little plastic beads all over the floor. They aren’t even real beans.  He did it because he could.

They should not breed that other breed. I saw a man who had been shredded by his pits.  He had bandages everywhere from puncture wounds and was being watched for infection.  I gave him my trainer’s card and suggested he consider getting rid of his dogs. He said he would but he doesn’t want them euthanized.  They nearly killed a large breed dog, tore its scalp off, then later went after each other. He pulled them apart and they attacked him.  He was terrorized and with good reason. I never found out if he called the trainer but I’m hoping he did and got good advice on what to do with them. Euthing would have been a kindness.  My trainer loves dogs but knows when someone should cut their losses and bail.

Some breeds pack well.  You can have a whole pack of beagles or foxhounds and you can pretty much expect them to be fine together.   If you a normal person and have 2 male GSDS or a male a female, or if you have 3 - 4 well-spaced, and/or speutered, trained, and well managed, you can keep them as a pack, if you are a good leader.

Back in the day, I had Arwen(6), Dubya(4), Babs + Jenna (2), Rushie(1.5), Heidi, Whitney, and Tori (1), all running together.    Rushie jumped on Dubya and while I was getting a gate between them, inside the room, through the doggy door, I heard WWIII going on.  Arwen took her chance to try to kill Jennna.  Jenna was a natural alpha bitch, whereas Arwen was not, so while Arwen would let Babsy act like a babysitter dog, Jenna was not allowed near her when she had pups.  Dynamics were interesting.  But I got inside and Dubya was secure in a kennel, but Rushie joined in the fray.

Immediately I started taking the youngsters and putting them in crates.  These were not completely involved in the fight, but were in it.  I just grabbed them each and crated them, until only Jenna and Arwen were still fighting.  Then I managed to get them apart, and I did it without getting bitten.  I stopped keeping dogs in packs.  In fact, I separated everyone after like 18 months old into separate kennels.

This was probably not the best management technique.  I started leaving a bitch in with her dam, or leaving a boy with a female so long as one was either speutered, or if there was a breeding it would be good -- not inbred.  Jenna was great with her bitch pups Nikki and Nina and they were together till the pups were 3 years and I rehomed both.  I put the new pup in with Jenna.  Karma is a bitch that doesn't do well on her own.  She was in with Uzi for a year, then it was hard on her to separate Uzi when her new litter came.  Now Karma is in Vera and Uzi is alone.  Kaiah is alone.  But Uzi today did not look like I could put her in with any female.  She did ok with Cujo2, but he's in with Hepsi.

I do not see this as necessarily a bad thing.  Right now, I have Karma with Vera, Kojak with Odie, Bear with Tinny, Cujo2 with Hepsi, and Ramona, Uzi, and Kaiah on their own.   I will put Kojak with Ramona, Odie with Kaiah, and may put the new pup, Columbo, when he comes home with Kaiah and Odie, or with Karma and Vera.  We'll see.  I don't want him in with Uzi as she's timid.  Maybe I will put her back with Cujo2 and bring Hepsi in with the baby.

Dogs that do not pack well, usually do fine in pairs.  Same sex with males, if there are no females close.  Females can be same sex if they are the right personalities -- both middle of the road, or one dominant and one clearly submissive, or one a dam and the other her pup from whelping on up -- normally not a problem.

You have to know what you have.  This the thing.  This is why people get hurt and killed.  They can't see the canine inside of their pet.  Pit bulls are great dogs, intelligent and loyal, but they are dogs, just like GSDs are dogs.  They have instincts and drives, and nature that comes from how they were bred.  They were bred to attack other dogs.  GSDs were bred to work with humans, to be protective, to attack if necessary, to herd.

If someone wants to own pitbulls, just like if they want multiple GSD bitches, they have to be ready to separate them.  To keep them separate.  The moment it appears that they may eat each other, they have to separate them forever.  Mrs. K kept bringing in bitches, GSDs and Malinois, and raising these bitch pups and suddenly one would fight with another of her bitches, and the next thing you know she'd put it down.  I watched those pups (through pictures) grow up, and she was putting them down for bitch-bitch aggression. What a bitch!  I'm sorry, but bitch-bitch aggression in GSDs is normal, and you have to be prepared for it, if you choose to own multiple bitches.  Karma and Vera are fine.  I am watching Bear and Tinnie, Bears is the dam, and she is 10.5 years.  Tinny is 2.5 years.  I just don't se it being an issue.  But if it is, even if Tinny kills Bear, I can't hold it against her, that would be on me.

We have to stop thinking that dogs ought to have a human moral structure.

0
ReplyToggle Dropdown
Msg 10 of 39 to selzerselzer
In reply toRe: msg 9

Yes, I agree they don’t follow our line of human thought.  Pits can turn in people though, which makes them dangerous.  GSDs can come up the leash.  My trainer just posted a picture of his son working with a young German Shepherd that bit him last week. This week they are doing an activity. I noticed the dog is in a new kind of training collar that has some kind of basket over the dog’s head.  It looks a little like harness worn upside down. I think the idea is the dog works on a regular collar and the basket thing doesn’t allow a bite.  But the neck is free, unlike a prong.  It’s just a regular collar. The difference is a GSD gives warning and it can be trained. A pit can seem trained and then bite without warning later on.