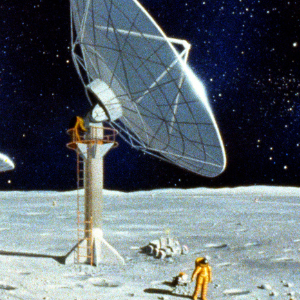 There are no messages in this view (All). See all.

Welcome to The Golden Age of Science Fiction

You can read the entire book, The Secret of the Ninth Planet at Project Gutenberg. That is, right here!

All Social Sharing features are ON in this forum.

Our header and welcome page image isn't as old as the books & movies we'll be talking about, but dates from 1989. It's from NASA's Flickr page, appears under a Creative Commons license and is described like this:

S89-25054 (January 1989) --- This is an artist's concept depicting a possible scene of an observatory on the far side of the moon. The artwork was part of NASA new initiatives study which surveyed possible future manned planetary and lunar expeditionary activity. The objective of the lunar observatory case study is to understand the effort required building and operating a long-duration human-tended astronomical observatory on the moon's far side. Some scientists feel that the lunar far side, quiet, seismically stable and shielded from Earth's electronic noise, may be the solar system's best location for such an observatory. The facility would consist of optical telescope arrays, stellar monitoring telescopes and radio telescopes, allowing nearly complete coverage of the radio and optical spectra. The observatory would also serve as a base for geologic exploration and for a modest life sciences laboratory. In the left foreground, a large fixed radio telescope is mounted on a crater. The telescope focuses signals into a centrally located collector, which is shown suspended above the crater. The lander in which the crew would live can be seen in the distance on the left. Two steerable radio telescopes are placed on the right; the instrument in the foreground is being serviced by scientists. The other astronaut is about to replace a small optical telescope that has been damaged by a micrometeorite. A very large baseline optical interferometer system can be seen in the right far background. The painting was done by Mark Dowman and Doug McLeod.