"An Unbelievable Story of Rape" wins the Pulitzer prize.

ProPublica and The Marshall Project in 2015 produced some of the most important reporting on rape in America in recent memory. Devastating. Nuanced. Illuminating. Unforgettable.

Most fundamentally, the joint work exposed the great, enduring threats to keeping women safe from sexual assault: just how disastrously rape investigations can go wrong when law enforcement fails to take victims seriously, and the refusal of police departments across the country to work together to stop serial rapists. But the reporting, scrupulously done and lucidly rendered, also demonstrated precisely how such sensitive investigations can be done with respect and results.

The organizations over 12 months generated a mix of powerful narrative, startling expose and astute analysis.

“An Unbelievable Story of Rape,” by Ken Armstrong and T. Christian Miller, is both a remarkable read and a harrowing explication of why women have been so unwilling to come forward after they have been raped. An 18- year-old woman outside Seattle reported being raped at knifepoint. The police didn’t believe her. Worse, they coerced her into saying she had invented the story, leading her to plead guilty to filing a false report. The young woman’s life was upended. The rapist remained free to victimize other women. At last, two female detectives in Colorado identified and caught the rapist, and the young woman in Washington State was vindicated.

Armstrong and Miller built their story on previously unreleased police records and first-ever interviews with the woman in Washington, known as Marie, the lead detective in Lynnwood, Washington, the serial rapist, and others. Mistake by outrageous mistake, they took readers inside the botched police investigation in Lynnwood, Wa. Breakthrough by startling breakthrough, they brought to life the committed investigation outside of Denver. They produced a story of suspense and heartbreak, incompetence and betrayal, courage and forgiveness.

“Made me cry in public,” said the novelist Laura Lippman.

“An Unbelievable Story of Rape,” was told as a braided narrative of two police procedurals – one investigation in Washington so badly mishandled that it amounted to a second violation of the victim, and one in Colorado that showed detective work at its best. Armstrong took the lead on the Washington chapters, Miller the Colorado ones. The Washington chapters became a study in doubt, how it sets in and spreads. The Colorado thread became a tense, sprawling chase for a serial rapist.

But “An Unbelievable Story of Rape” was more than just an awful tale memorably told. Its value was appreciated by far more than fans of unforgettable journalism. Major women’s organizations encouraged their memberships to read it. More than one law enforcement agency asked to use the story as part of their training programs.

“You and your colleagues have turned a profoundly tragic and grossly incompetent response to a rape report into an extraordinary learning opportunity for both criminal justice professionals and ordinary citizens alike,” Jennifer Gentile Long, chief executive officer of AEquitas: The Prosecutors' Resource on Violence Against Women, wrote in a note to the reporters.

In “An Unbelievable Story of Rape,” the Colorado detectives worked together across departments, but not all investigators do. Because of the failure of a once-promising FBI program, not all can.

“The FBI Built a Database That Can Catch Rapists – Almost Nobody Uses It” is a withering account of the agency’s flawed efforts to apprehend repeat sexual offenders, of whom there are a formidable number. The database, meant to create an investigative tool in the absence of DNA evidence, has been virtually ignored. Of 79,770 rapes reported to police in 2013, only 240 cases were entered into the database – 0.3 percent.

“It's disappointing and embarrassing,” said Greg Cooper, a retired FBI agent who once directed the program.

Again, the work was not content to meticulously detail an epic failure. It also showed, clearly and convincingly, a striking success. Canada, it turns out, had created its own version of the FBI’s bastard-child database. Police were required to use it, and, not shockingly, cases were solved and rapists taken off the street.

How and why The Marshall Project and ProPublica came to join forces in reporting on rape in America is something of a model for 21st Century journalism.

Armstrong and Miller had each reported aspects of “An Unbelievable Story of Rape” when they realized the presence of the other. Both were veterans of legacy news organizations. But now, in their new incarnations, both were empowered to make up their own rules. Partnership, then, trumped rivalry. Giving the public the most authoritative, most useful reporting seemed more vital than publishing first.

That partnership – and the work of resonance and rarity that resulted – came to include a series of pieces that ran after the publication of “An Unbelievable Story of Rape.” There was a smart and startling look at the troubled state of rape statistics. There was a thoughtful, succinct listing of best practices for those charged with investigating rape. And there was an online Q and A for readers with one of the country’s foremost rape experts.

The combined work constitutes the very best in explanatory journalism: a controversial topic tackled with courage and clarity, and with the express purpose of promoting a better public understanding of both the problems and opportunities for those eager to end the plague of sexual violence.

We are proud to nominate the work of Miller and Armstrong for the Pulitzer Prize in Explanatory Reporting.

BYU - the school where reporting rape will get you kicked out. 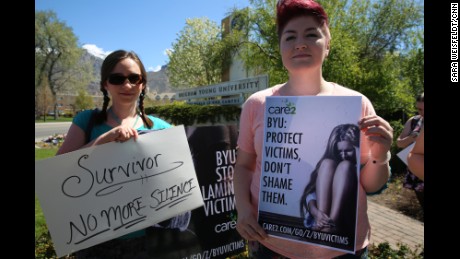 Punished after rape at Brigham Young U

Brooke's nightmare began in February 2014, when she was a freshman. She said she had taken hallucinogenic drugs just before being assaulted. She was with a group of guys at an off-campus apartment. She admitted that she took the drugs voluntarily, thinking everyone else was going to do them, too.

Here’s The Powerful Letter The Stanford Victim Read To Her Attacker https://t.co/UI9ElbZueq