Upminster Windmill is a Grade II* listed smock mill located in Upminster in the London Borough of Havering, England.

Valleyfair (is a 125-acre amusement park in Shakopee, Minnesota, United States. Owned by Cedar Fair, the park opened in 1976 and now features over 75 rides and attractions including eight roller coasters. Valleyfair also has a water park called Soak City which is included with the price of admission. Cedar Point and Valleyfair were the first two parks in the Cedar Fair chain and a combination of the park names – "cedar" and "fair" – were used to name the company) Crestwood, KY is just about a mile from Pewee Valley where I lived for 15 years. It's where my children attended school and played Little League baseball and softball.

Zumbrota (is a city in Goodhue County, Minnesota, United States, along the North Fork of the Zumbro River. The population was 3,252 at the 2010 census. It promotes itself as "the only Zumbrota in the world.")

This town has it's own Carnegie library, in fact the Carnegie Corporation issued grants that helped build 65 libraries in Minnesota....

Another interesting fact, Andrew Carnegie founded U.S. Steel which owns some of the iron ore mines here in Minnesota......

Alydar - was a chestnut colt and an American Thoroughbred race horse who was bred at Calumet Farm in Lexington, Kentucky. He was most famous for finishing a close second to Affirmed in all three races of the 1978 Triple Crown. With each successive race, Alydar narrowed Affirmed's margin of victory; Affirmed won by 1.5 lengths in the Kentucky Derby, by a neck in the Preakness and by a head in the Belmont Stakes. Alydar has been described as the best horse in the history of Thoroughbred racing never to have won a championship. Alydar's fame continued when he got older. He died under suspicious circumstances. Alydar is buried at Calumet Farm.

Alysheba - was an American Thoroughbred racehorse that won two legs of the Triple Crown in 1987. A successful sire, he produced 11 stakes winners. A bay colt, Alysheba was sired by Alydar out of the mare Bel Sheba, by Lt. Stevens. He was bred by Preston Madden at Hamburg Place Farm in Lexington, Kentucky, and was sold as a yearling to Dorothy and Pam Scharbauer for $500,000. 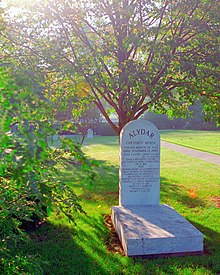 Alysheba's grave site at the Kentucky Horse Park near Lexington

Bunker Beach (is Minneota's largest outdoor water park in Coon Rapids, Minnesota, within the 1,700-acre Bunker Hills Regional Park. It is owned by the Anoka County Parks and Recreation Department)

I mentioned Calumet Farm earlier in the Alydar & Alysheba post. Now a little about another famous horse farm in Kentucky.

Claiborne Farm - is a thoroughbred horse breeding operation near Paris, Kentucky. It was established in 1910 by Arthur B. Hancock, owner of Ellerslie Farm in Albemarle County, Virginia, and has been operated by members of his family ever since. Arthur B. Hancock imported breeding stock from Europe that made Claiborne Farm an international leader in breeding, sales, and racing. Claiborne Farm won the Eclipse Award for Outstanding Breeder in 1979 and again in 1984. It has been visited twice by Queen Elizabeth II of the United Kingdom, who owns racehorses herself. 1973 Triple Crown winner Secretariat was syndicated by Seth Hancock for breeding purposes and stood at stud at Claiborne Farm from the conclusion of his racing career at the end of 1973 until his death in 1989.

Arlene Dahl (born in Minneapolis, MN, Arlene is an American retired actress and former Metro-Goldwyn-Mayer contract star, who achieved notability during the 1950s. She has three children, the eldest of whom is actor Lorenzo Lamas)