New York Radical Women (was an early second-wave feminist radical feminist group that existed from 1967 to 1969. They drew nationwide media attention when they unfurled a banner inside the 1968 Miss America pageant displaying the words "Women's Liberation")

The Odd Couple - is a 1968 American buddy comedy film written by Neil Simon, based on his 1965 play of the same name. The film stars Jack Lemmon and Walter Matthau. It is the story of two divorced men – neurotic neat-freak Felix Ungar and fun-loving slob Oscar Madison – who decide to live together, even though their personalities clash. The film was successful with critics and audiences, grossing over $44.5 million, making it the third highest-grossing picture of 1968. The success of the film was the basis for the ABC television sitcom of the same name, starring Tony Randall and Jack Klugman as Felix and Oscar. 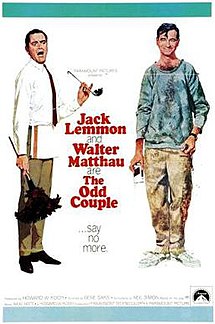 Pull Tab Beer Cans (In 1963, the first pull tab beer cans appeared on the market. Pittsburgh Brewing Company used the tabs on their iconic Iron City Beer and consumers loved them. As wonderful as they were, these easily removable strips of metal caused a whole new set of problems. Litterbugs seemed determined to scatter the sharp metal tabs everywhere)

"Quarter to Three" - sung by Gary U.S. Bonds, the song became a number-one hit on the Billboard Hot 100 in the United States on June 26, 1961, and remained there for two weeks.

Rowan & Martin's Laugh In (is an American sketch comedy television program that ran for 140 episodes from January 22, 1968, to March 12, 1973, on the NBC television network, hosted by comedians Dan Rowan and Dick Martin. It originally aired as a one-time special on September 9, 1967, and was such a success that it was brought back as a series, replacing The Man from U.N.C.L.E.on Mondays at 8 pm (ET). It quickly became the most popular television show in the United States)

Star Trek - is an American science-fiction television series created by Gene Roddenberry that follows the adventures of the starship USS Enterprise (NCC-1701) and its crew. Star Trek aired on NBC from September 8, 1966, to June 3, 1969. The show’s Nielsen ratings while on NBC were low, and the network cancelled it after three seasons and 79 episodes. Several years later, the series became a hit in broadcast syndication, remaining so throughout the 1970s, achieving cult classic status and a developing influence on popular culture.

That's it for me.

Tunnel of Fudge Cake (In the 1966 Pillsbury Bake-Off, contestant Ella Helfrich took second place with her recipe for Tunnel of Fudge Cake. She used the Pillsbury Double Dutch Fudge frosting mix and a little-known baking dish called the bundt pan. After this recipe won second place in the 1966 Pillsbury Bake-Off, it took the country by storm and transformed the budnt cake pan from an obscure oddity to a must-have in any baker's kitchen)

Volkswagen Type 2 (became popular with the counterculture of the 1960s, thanks to its ability to transport a large group of people while being cheap and easy to maintain. Its design was simple yet spacious, thanks largely to the rear-mounted engine. The van became popular with young people because it allowed a group to travel comfortably and was big enough to live in, so it could be used for long-distance journeys, such as to music festivals or surfing locations)

While my guitar gently weps - The Beatles 1968

(It could be interesting to find out which Beatles number is your favorite. I think that this one is mine!) YouTube
While My Guitar Gently Weeps (Taken from Concert For George)