Pencil Nebula also known as NGC 2736 is a small part of the Vela Supernova Remnant, located near the Vela Pulsar in the constellation Vela. The nebula's linear appearance triggered its popular name. It resides about 815 light-years (250 parsecs) away from the Solar System. It is thought to be formed from part of the shock wave of the larger Vela Supernova Remnant. The Pencil Nebula is moving at roughly 644,000 kilometers per hour (400,000 miles per hour) 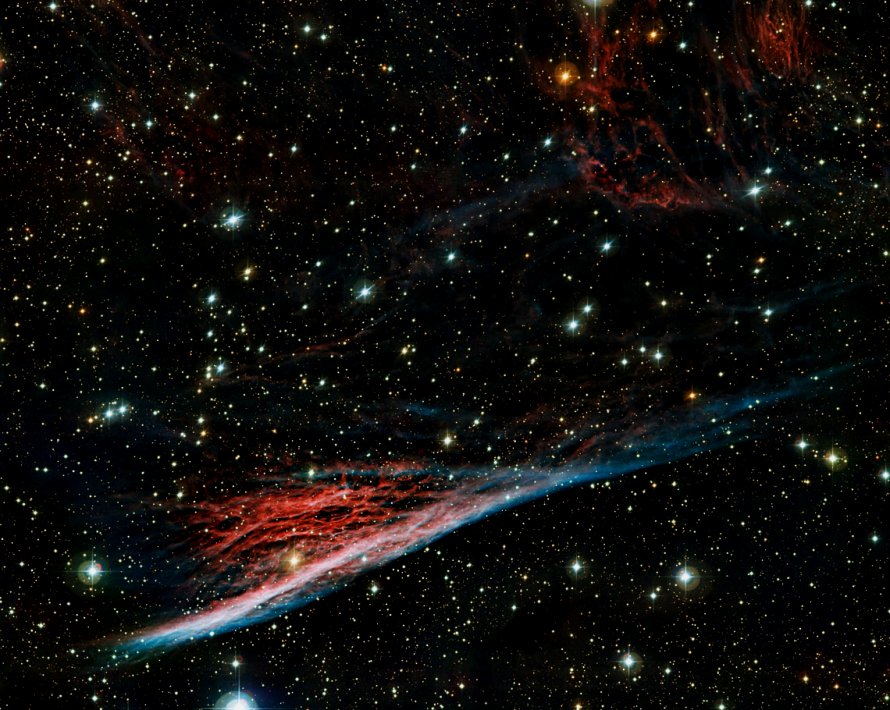 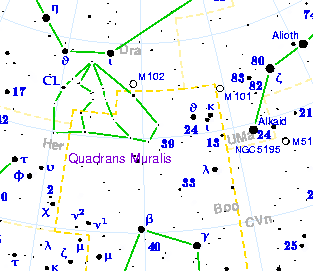 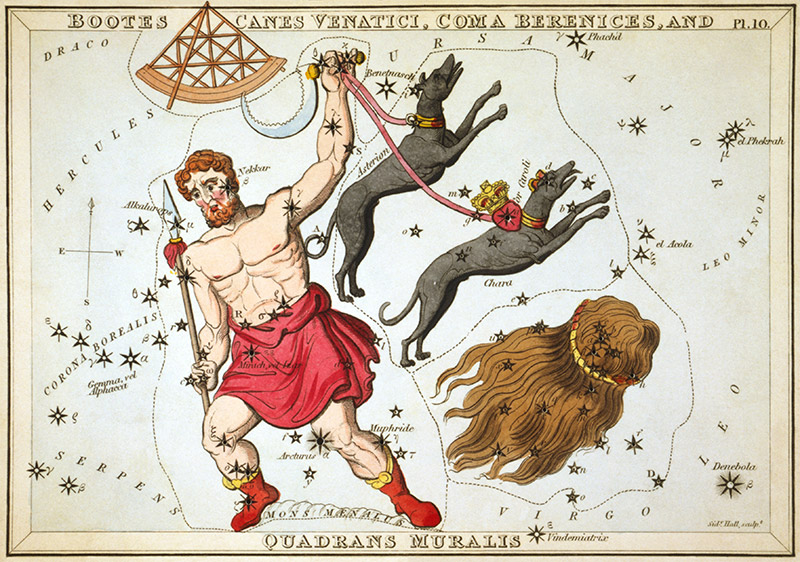 The Red Spider Nebula (also catalogued as NGC 6537) is a planetary nebula located near the heart of the Milky Way, in the northwest of  the constellation Sagittarius. The nebula has a prominent two-lobed shape, possibly due to a binary companion or magnetic fields and has an S-shaped symmetry of the lobes – the lobes opposite each other appear similar. This is believed to be due to the presence of a companion to the central white dwarf. However, the gas walls of the two lobed structures are not at all smooth, but rather are rippled in a complex way.

The central white dwarf, the remaining compact core of the original star, produces a powerful and hot (≈10,000 K) wind blowing with a speed of 300 kilometers per second, which has generated waves 100 billion kilometres high. The waves are generated by supersonic shocks formed when the local gas is compressed and heated in front of the rapidly expanding lobes. Atoms caught in the shocks radiate a visible light. These winds are what give this nebula its unique 'spider' shape and also contribute to the expansion of the nebula.

The star at the center of the Red Spider Nebula is surrounded by a dust shell making its exact properties hard to determine. Its surface temperature is probably 150,000–250,000 K,  although a temperature of 340,000 K or even 500,000 K is not ruled out, making it among the hottest white dwarf stars known.

The Red Spider Nebula lies near the constellation of Sagittarius. Its distance has been variously estimated as 1,900 light-year or, more likely, 3,000–8,000 light-years

Seyfert Galaxy (are one of the two largest groups of active galaxies, along with quasars. They have quasar-like nuclei (very luminous, distant and bright sources of electromagnetic radiation) with very high surface brightnesses whose spectra reveal strong, high-ionisation emission lines, but unlike quasars, their host galaxies are clearly detectable. Seyfert galaxies account for about 10% of all galaxies and are some of the most intensely studied objects in astronomy, as they are thought to be powered by the same phenomena that occur in quasars, although they are closer and less luminous than quasars. These galaxies have supermassive black holes at their centers which are surrounded by accretion discs of in-falling material. The accretion discs are believed to be the source of the observed ultraviolet radiation. Ultraviolet emission and absorption lines provide the best diagnostics for the composition of the surrounding material. Seen in visible light, most Seyfert galaxies look like normal spiral galaxies, but when studied under other wavelengths, it becomes clear that the luminosity of their cores is of comparable intensity to the luminosity of whole galaxies the size of the Milky Way. Seyfert galaxies are named after Carl Seyfert, who first described this class in 1943) 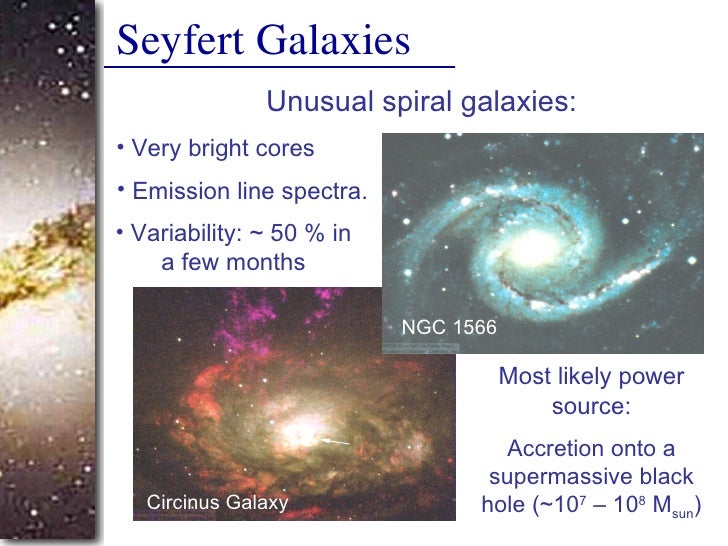 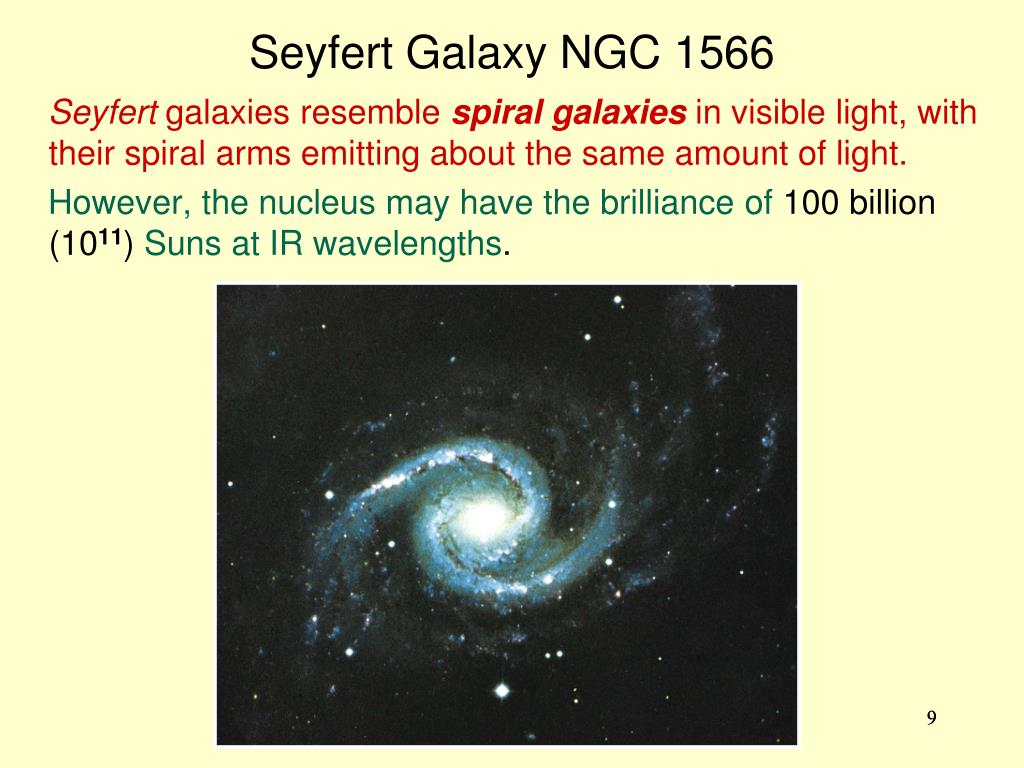 Joseph Hooton Taylor Jr. (born March 29, 1941) is an American astrophysicist and Nobel Prize laureate in Physics for his discovery with Russell Alan Hulse of a "new type of pulsar, a discovery that has opened up new possibilities for the study of gravitation."  he has worked on all aspects of pulsar astrophysics.

In 1974, Hulse and Taylor discovered the first pulsar in a binary system, named PSR B1913+16 after its position in the sky, during a survey for pulsars at the Arecibo Observatory in Puerto Rico. Although it was not understood at the time, this was also the first of what are now called recycled pulsars: Neutron stars that have been spun-up to fast spin rates by the transfer of mass onto their surfaces from a companion star. 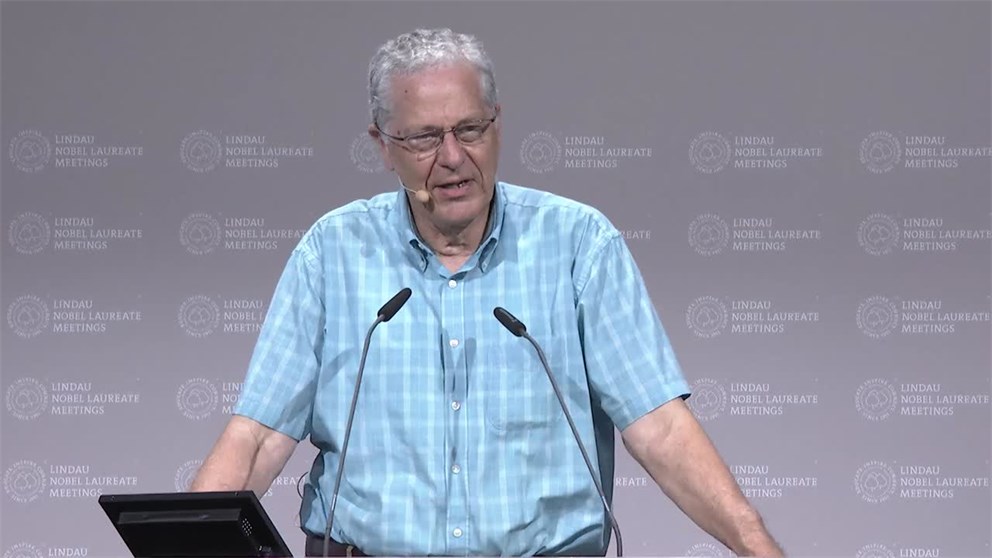 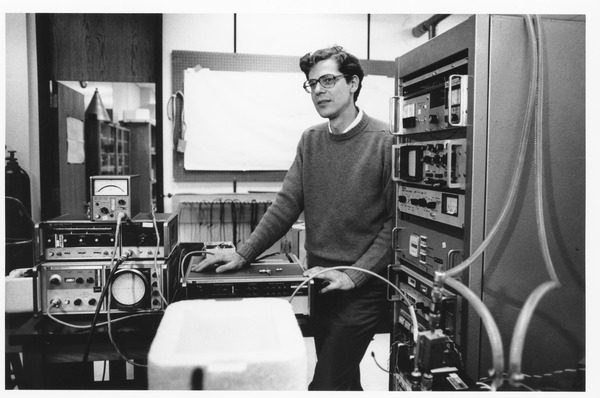 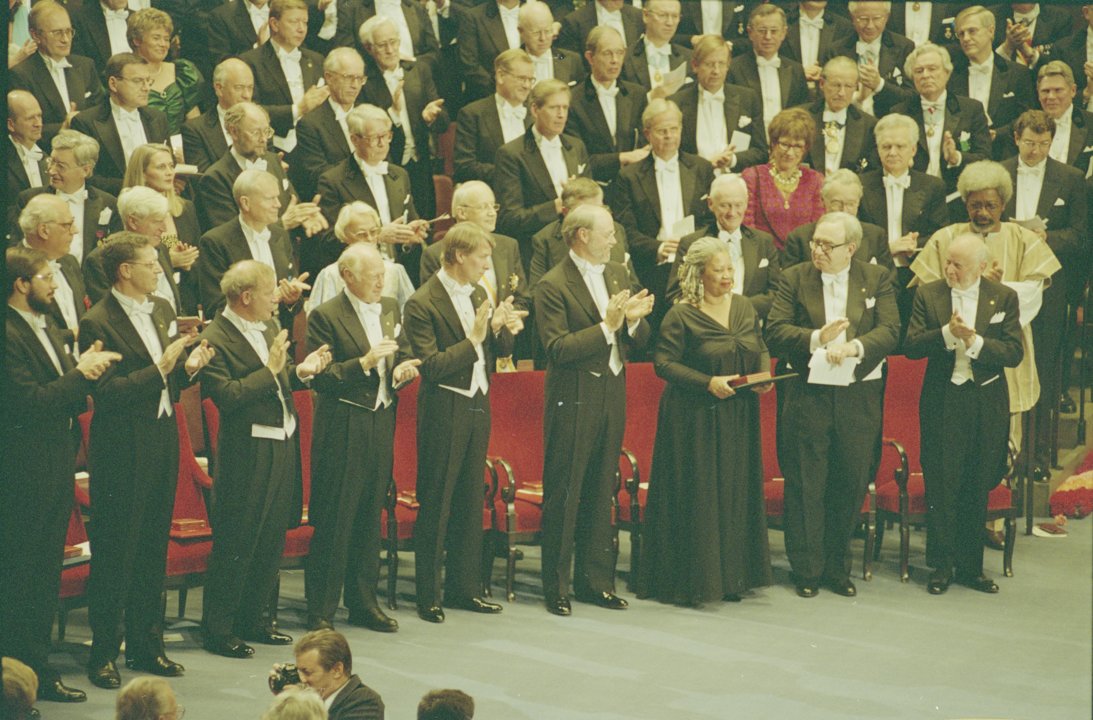 Urania's Mirror (is a set of 32 astronomical star chart cards, first published in November 1824. They are illustrations based on Alexander Jamieson's A Celestial Atlas,but the addition of holes punched in them allow them to be held up to a light to see a depiction of the constellation's stars. They were engraved by Sidney Hall, and were said to be designed by "a lady", but have since been identified as the work of the Reverend Richard Rouse Bloxam, an assistant master at Rugby School. The cover of the box-set depicts Urania, the muse of astronomy. It originally came with a book entitled A Familiar Treatise on Astronomy... written as an accompaniment. Peter Hingley, the researcher who solved the mystery of who designed the cards a hundred and seventy years after their publication, considered them amongst the most attractive star chart cards of the many produced in the early 19th century) 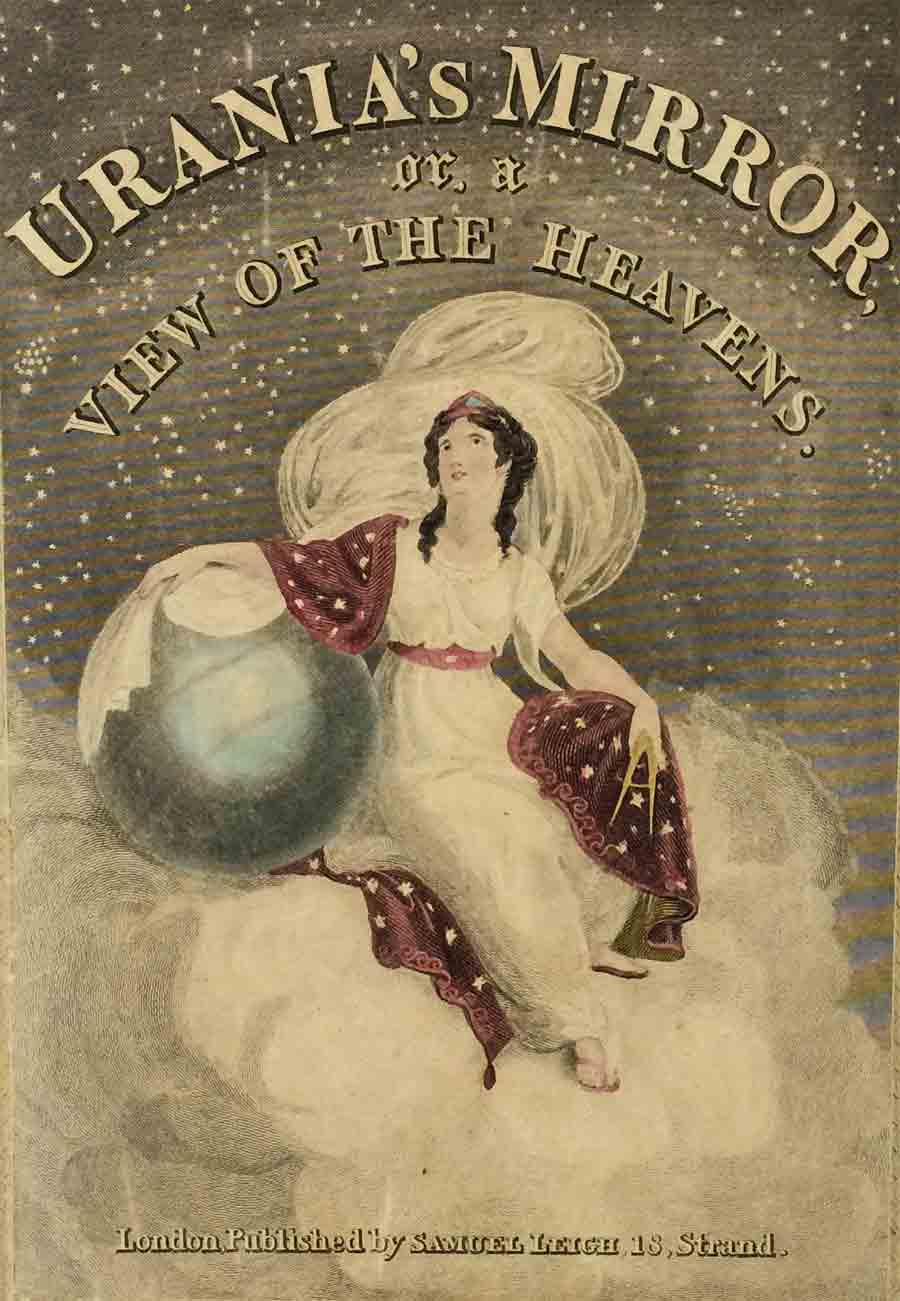 Veil Nebula is a cloud of heated and ionized gas and dust in the constellation Cygnus.

It constitutes the visible portions of the Cygnus Loop, a supernova remnant, many portions of which have acquired their own individual names and catalogue identifiers. The source supernova was a star 20 times more massive than the Sun which exploded between 10,000 and 20,000 years ago. At the time of explosion, the supernova would have appeared brighter than Venus in the sky, and visible in daytime. remnants have since expanded to cover an area of the sky roughly 3 degrees in diameter (about 6 times the diameter, and 36 times the area, of the full Moon). While previous distance estimates have ranged from 1200 to 5800 light-years, a recent determination of 2400 light-years is based on direct astrometric measurements. (The distance estimates affect also the estimates of size and age.)

The Hubble Space Telescope captured several images of the nebula. The analysis of the emissions from the nebula indicates the presence of oxygen, sulfur, and hydrogen. The Cygnus Loop is also a strong emitter of radio waves and x-rays.

On 24 September 2015 new images and videos of the Veil Nebula were released by the Space Telescope Science Institute,[9] with an explanation of the images 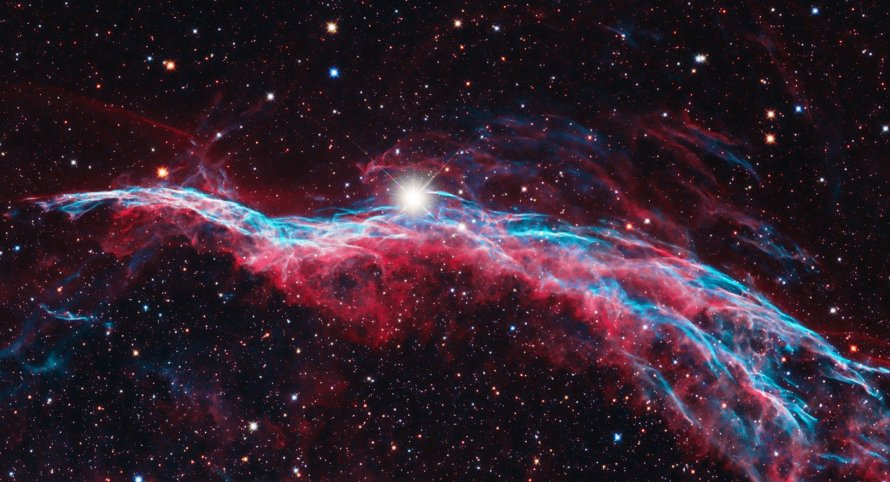 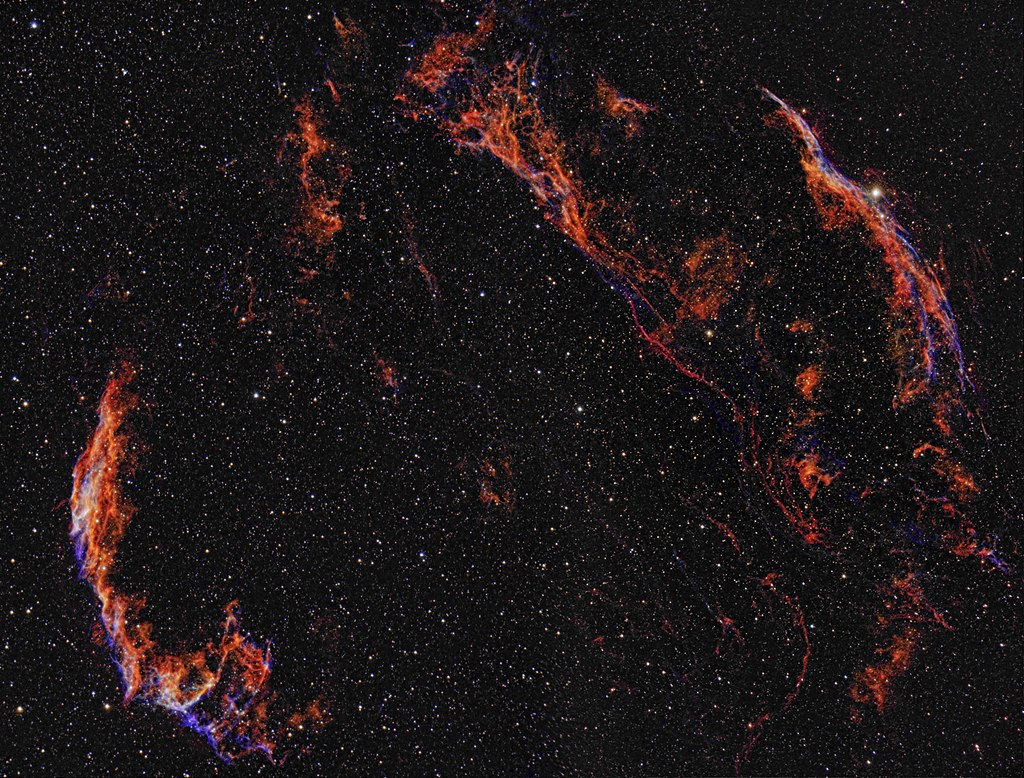 Wormhole (is a speculative structure connecting disparate points in spacetime, and is based on a special solution of the Einstein field equations. A wormhole can be visualized as a tunnel with two ends at separate points in spacetime (i.e., different locations, different points in time, or both). Wormholes are consistent with the general theory of relativity, but whether wormholes actually exist remains to be seen. Many scientists postulate that wormholes are merely projections of a fourth spatial dimension, analogous to how a two-dimensional (2D) being could experience only part of a three-dimensional (3D) object. Theoretically, a wormhole might connect extremely long distances such as a billion light years, or short distances such as a few meters, or different points in time, or even different universes. In 1995, Matt Visser suggested there may be many wormholes in the universe if cosmic strings with negative mass were generated in the early universe. Some physicists, such as Frank Tipler and Kip Thorne, have suggested how to make wormholes artificially) 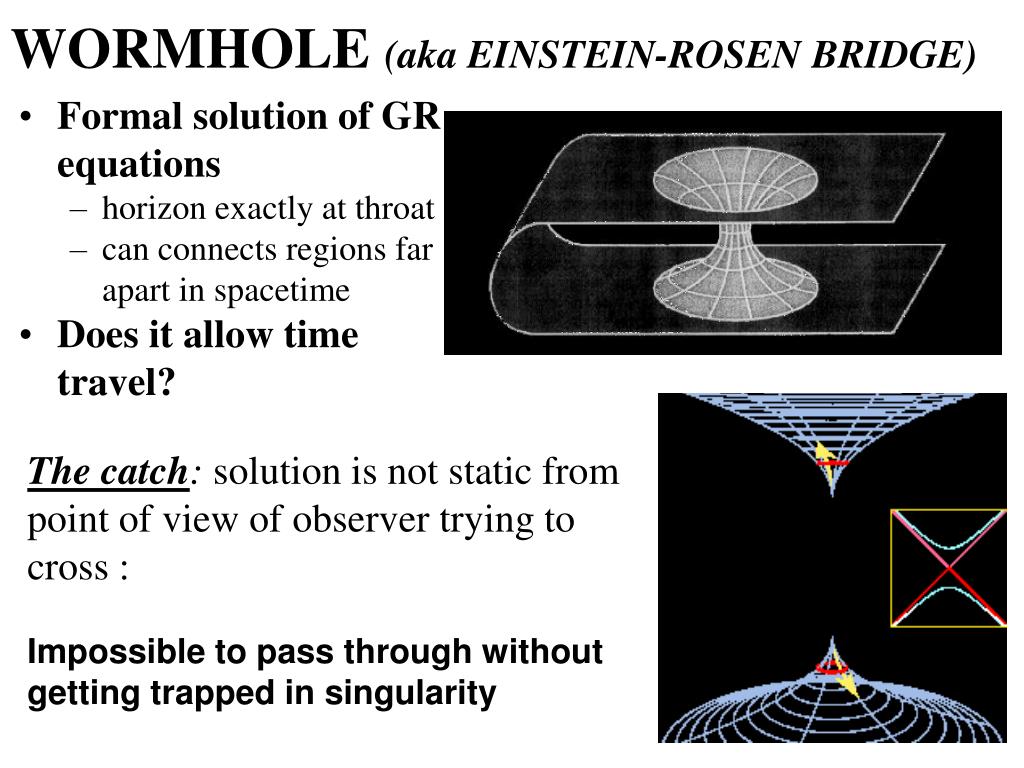 Xanthippe (minor planet designation: 156 Xanthippe) is a dark background asteroid from the central regions of the asteroid belt, approximately 120 kilometers (75 miles) in diameter. It was discovered on 22 November 1875, by Austrian astronomer Johann Palisa at the Austrian Naval Observatory, in what is now Croatia. It is named after Xanthippe, the wife of the Greek philosopher Socrates 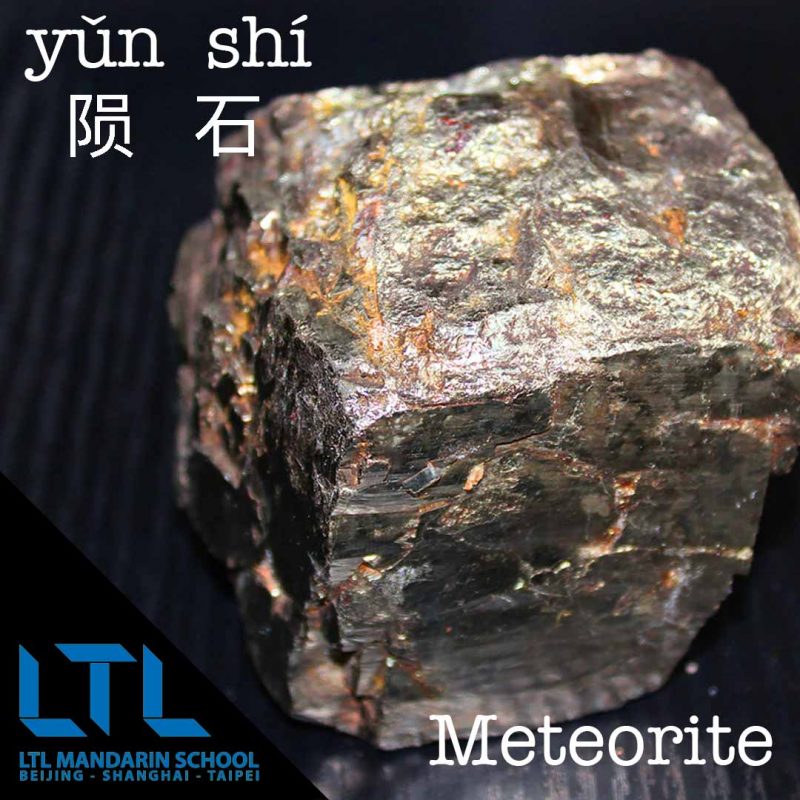