Colombia - is a country largely situated in the north of South America, with land and territories in North America. Colombia is bounded on the north by the Caribbean Sea, the northwest by Panama, the south by both Ecuador and Peru, the east by Venezuela, the southeast by Brazil, and the west by the Pacific. It comprises thirty-two departments, with the capital in Bogotá. 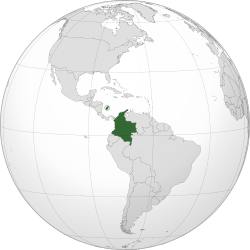 Diaguita (are a group of South American indigenous people native to the Chilean Norte Chico and the Argentine Northwest. Western or Chilean Diaguitas lived mainly in the Transverse Valleys incised in a semi-arid environment. Eastern or Argentine Diaguitas lived in the provinces of La Rioja and Catamarca and part of the provinces of Salta, San Juan and Tucumán. The term Diaguita was first applied to peoples and archaeological cultures by Ricardo E. Latcham in early 20th century. The classical Diaguita period was characterized by advanced irrigation systems and by pottery painted in black, white and red)

Effigies - Ecuadorians create effigies stuffed with hay and fireworks. The figurines are representations of disliked people, national or local officials, famous people or folkloric characters and will be ignited on New Year's Eve at the Fiesta de Ano Viejo.

Farofa (is a toasted cassava or corn flour mixture. It is eaten mainly in Brazil. It can be found commercially produced and packaged but is often prepared at home based on family recipes. Most recipes will also contain varying amounts of salt, smoked meat, and spices. The consistency of the mixture ranges from large grains the size of cracked bulgur wheat or couscous down to a table-salt-sized powder. Most farofas have a very smoky and slightly salty taste, by and large used to accentuate the taste of meat, particularly barbecued meat and hearty stews)

Georgetown - is a city and the capital of Guyana. It is the country's largest urban center. It is situated on the Atlantic Ocean coast at the mouth of the Demerara River and it was nicknamed the "Garden City of the Caribbean". Georgetown serves primarily as a retail and administrative center. It also serves as a financial services center. The city recorded a population of 200,500 in the 2016 census.

Himno Nacional Argentino - is the national anthem of Argentina

Itaipu Dam (is a hydroelectric dam on the Paraná River located on the border between Brazil and Paraguay. The construction of the dam was first contested by Argentina, but the negotiations and resolution of the dispute ended up setting the basis for Argentine–Brazilian integration later on)

Jatun Q'asi - is a mountain pass in Bolivia