Russian Culture offers a wide variety of Topical Netlinks pages, authoritative Feature Articles and other resources about Russia, her heritage and people.

Last Saturday in Odessa the 32-year-old  prosecutor of  Odessa Sergey Melnichuk was found dead. According to the official version he jumped out of a window of his own apartment on the 9th floor.

The prosecutor was investigating the  Odessa massacre, the events that happened on May2,2014 when people have been killed or burnt alive

And one more detail that surprised me - Natalya Poklonskaya, a young woman, was nominated the General Prosecutor of Crimea because the more experienced men were afraid to occupied the place. There were already several attampts to kill her. Oleksandr Peklushenko (1954–2015) was a Ukrainian politician and public figure, member of the Verkhovna Rada of IV, V, VI convocation, chairman of Zaporizhzhya Regional State Administration in 2011–2014.

On March 12, 2015 he was found dead on the street in Sunny village. Law enforcers are considering suicide version shot in the neck

Peklushenko was the suspect of criminal case about dispersal of a local Maidan at the beginning of 2014.

Trial on this case was started last year. However the European comission called investigation carried out by Kiev ineffective.

Kalashnikov was Yanukovich supporter. He informed police and his friends and relatives that he received threats .

Recently he appealed to Ukrainians to celebrate the 70 years of a Victory Day, he was engaged in preparations of a Meeting in honor of the Victory Day.

However, the group in power are Nazi supporters and the Victory Day is a crush of Nazi dreams, that is why Kalashnikov was not just the opposition, he was the enemy 0
ReplyToggle Dropdown
Msg 10 of 21 to justawomanjustawoman
In reply toRe: msg 8

It is why I say anarchy rules Kiev. Democracy certainly doesn't.
0
ReplyToggle Dropdown
Msg 11 of 21 to justawomanjustawoman
In reply toRe: msg 9

Another journalist Sergey Sukhobok has been killed on April 13

It is not anarchy, it is planned action of extermination of opposition

There are scans of Nazi reaction: 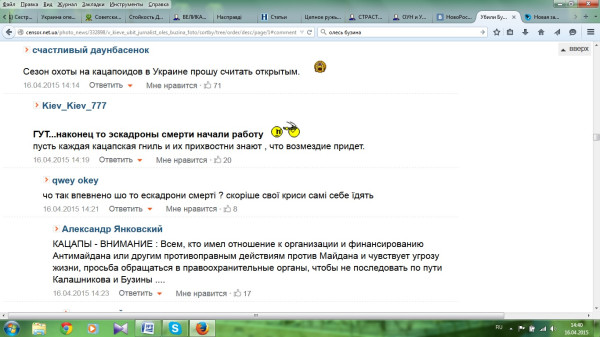 "Hunt season on Russians  is open"

"Good, squadrons of Death started their work. Let every Russian know that retribution will come"

In other places they write: "it is our Bandera attentat - method of struggle of Bandera followers"

Attentat - an act of political violence or terrorism, especially a political assassination.