If you are not into writing or POETRY lifestyle you will be bored here...

An Evening With Jason Alexander’

Sports finally get an audience

The Remarkable Science of Grounding 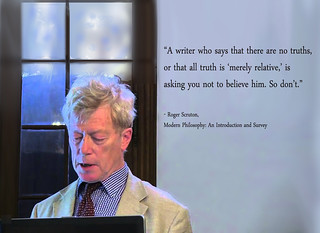 In the core of things Roger Scruton is down right about 'Leftwing' and 'Rightwing' politics, he said:

In just a few words again; people from the western world that have refined democracy and its democratic laws with a liable constitution, do not go roughly preach warmongering vendettas with everyone that do not agree with them - yet something people from the Arab world have yet to learn, but they still keep preaching through a book of medieval times calling for everyone to 'join or die'... these ancient times conduit and their beliefs do not fit into our century!

The Future of European Civilization: Lessons for America

The Heritage Foundation Published on Oct 14, 2015
https://youtu.be/WMz3clGp_MY
America has much to learn from Europe’s current condition. The decline in religious faith has led to a universal weakening of European society and a loss of confidence in the value of its civilization. And the effects have been grave: throngs of unassimilated immigrants, military threats from abroad, and confusion about national identity. America, by contrast, still shows many signs of strength. Nonetheless, should we lose our sense of shared identity, Europe’s path likely awaits. What can Americans learn from Europe? Does America have hidden strengths which, if properly used, will allow us to avoid a similar fate? And are there areas in which Europe is faring better than we are?

Without argument the European Union are doing a very bad job preventing major danger among their own innocent people!!

Roger Scruton makes several good points, but who are we to say anything that might get us all censored by the regressive Left for voicing out our genuine opinions!?